Most famously, Elvis Presley, was part Cherokee. A good friend of mine that was an Elvis tribute artist for many years was coincidentally also part Cherokee.

My friend Bob was not famous, but he did perform with a band that was the opening act for Question Mark and the Mysterians. he also did an Elvis tribute act frequently for hospital patients.

Cherokee Nation was previously known as the The Principle People or Ani'Yun'wiya.

Elvis Presley's great grandmother was full Cherokee, but I never met him, and he was my 13th cousin. he also appears in President Barack Obama's family tree.

Nunna daul Tsunyi is the term for the forcible removal of the Cherokee Nation and the former black slaves that lived among them in 1838.

This was in the early years of the Indian Removal Act under President Andrew Jackson and it was horrid treatment of people. Their Passage began at Ross's Landing on the Tennessee River in what is now Downtown Chattanooga, Tennessee.

To whites, this is the Trail of Tears upon which as many as 40% or more of the men, w omen, and children walking through harsh weather westward died in extreme the cold from hypothermia, sickness, and starvation. It was the coldest winter of the 19th Century.

Coming an odd full circle around in the early 2010s, Cherokee Nation has expelled the descendants of the African American members of the tribe.

The Cherokee language is a Southern Iroquoian language, a marker for the Cherokee to have split from the Iroquois Confederacy many years previously. 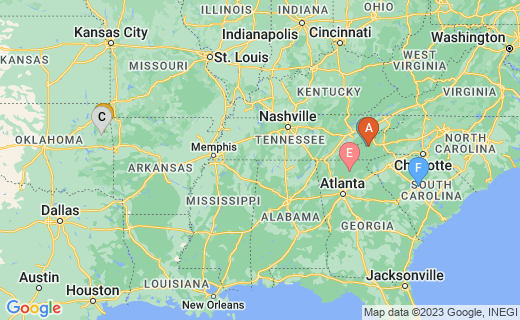 Home of many tourist, accommodations, and casino facilities.

This is the third Cherokee Nation entity, founded in the 1950s.

Recognized by the State of Georgia.

Recognized by the State of South Carolina.

Dragging Canoe: During the American Revolution, this Cherokee warrior gathered together Cherokee Mohawk, Shawnee, and Delaware tribesmen to fight against the American colonists. This was not the first or only time that the Mohawk would oppose Americans - they continued to do so in the French and Indian War and the War of 1812. One of my ancestors among the Mohawk Nation translated languages at the Battle of Fort Pitt.

Sequoyah (1770-1843): Born a few years before the American Revolution began, this man invented the Cherokee symbols for the tribe's alphabet. Some sources state that Sequoyah was born later, in 1776. Most agree, however, that he was half white, being the son of fir trader Nathaniel Gist. Sequoyah's "white name" was George.

John Ross: Second Principal Chief in 1811 and on the Trail of Tears, he later becoming First Principal Chief. Ross's Landing on the Tennessee River in Chattanooga is named for him. A memorial for Cherokee Nation is located nearby and named The Passage. The Cherokee called Pathkiller was First Principal Chief until his death and was replaced by John Ross, who signed a treaty with the Confederate States of America.

Brigadier General Stand Watie (1806 - 1871): I believe that this name took on the meaning of "stand and wait", a nickname derived from the native name Standhope Uwatie and a Cherokee nickname that meant "stand firm." Stand Waitie was a Brigadier General for the South and the 1st Cherokee Mounted Rifles during the American Civil War. On June 23, 1865, Stand Watie was the last Confederate general in the field to surrender and he waited until the very last moment. This warrior led his unit with the notion of protecting Cherokee lands from the North during the war and he was serious about his responsibility in this task.

Elias Boudinot or Gallegina Uwati (1802 - 1839), Stand Waitie's brother. He wrote a newspaper, the Cherokee Phoenix. Like his brother, he believed that Indians and whites should join forces and the Uwatis did so, intermarrying, going into business, and even owning slaves, as some of the Iroquois people did.

The Famous Cherokee Indian Base Ball Club - Rare post cards of this group show them involved in baseball from 1908 - 1912. A woman, Maud Nelson, was their pitcher in 1908, but she also played on women's baseball teams. Sh was also a baseball scout, a team manager, and a team owner.

Will Rogers (1879 - 1935): Nicknamed The Cherokee Kid, Rogers was a comedian and political commentator (think "Stephen Colbert" and "Mark Twain"). He was 1/4 Cherokee.

Kenneth Stanley Adams, Jr. (b. 1923): Age 89 in 2012, he is the owner of the Tennessee Titans' NFL team. Originally, he made a fortune in oil and continues to be involved in energy production.

Elvis Presley (1935 - 1977): Descended from a Cherokee on his mother's side, Elvis is my 13th cousin. He is also a cousin of President Barack Obama, the President's mother being related to the family of Elvis's mom. Further, the President's mother is related to my mother's relatives that settled in Southern Ohio. Elvis is famous, but I'm only well known enough to receive spam and requests for "loans"! Elvis changed popular music and specifically, rock n' roll, to a greater extent than any other singer before or since.

Burt Reynolds (b. 1936 - ): Actor whose father, Burt Sr., was Cherokee and Irish. Reynolds is likely most famous fr his Smokey and the Bandit film series and fore his marriages to Judy Carne (Laugh In) and Loni Anderson (WKRP In Cincinnati) and his affairs with Sally Field and Dinah Shore. He was well known for his roles in early television shows Riverboat and Gunsmoke.

Della Reese: Famous singer and actress, her mother is full-blood Cherokee, according to her interview on television with Rosie O'Donnell in May, 1999.

James Earl Jones: Famous American actor, most known for his role as Darth Vader in the Star Wars films.

Cher Sarkisian Bono Allman: Cher became famous in the 1960s as one half of the singing duo Sonny and Cher. They used to perform on Saturday teen dance shows and went on to have their own musical comedy variety show for a few years. Cher is Cherokee on her mom's side, "Sarkisian" being her dad's name and Armenian.

President William Jefferson Clinton: He is 1/16 Cherokee, but undocumented.

Christopher Judge - One of the stars of the Stargate television series and a bit player in TV's MacGyver.