A story of true love?

Strictly speaking this may, or may not, be a love story. It is certainly famous but perhaps only in Wales. It is the true tale of the abduction of a beautiful woman in the 12th century, a sort of British equivalent of the story of Helen of Troy. From this distance in time and lacking any sort of credible documentary evidence, we will never know for certain whether or not love was involved at all, or whether the events were simply fuelled by lust. But although there is little concrete evidence of love, I believe it is possible that this event could have been the earliest known example of Stockholm Syndrome and that Nest came to love her abductor, Owain ap Cadwgan.

The Princess Nest: a woman of outstanding beauty.

Nest (sometimes called Nesta) was born a princess of one of the many petty kingdoms of Wales in 1080. Her father, Prince Rhys ap Tewdwr, ruled Deheubarth in South Wales, an area which has since become part of modern day Pembrokeshire. After her father's death fighting against his Norman would-be overlords in 1093, Nest was taken as a hostage by the king, William Ⅱ, known as William Rufus, the son of William the Conqueror. As a royal hostage she would have been well treated and she grew to adulthood in the English court. So it was only a matter of time until her developing beauty brought her to the attention of the King's younger brother, Henry, who took her as his mistress.

A husband for Nest.

Of course such a liaison could not last. With the untimely, and suspicious, death of his brother William, Henry became King Henry Ⅰ of England and, although he generously acknowledged the son he had sired on Nest, he really needed to make a dynastic marriage. So he married Nest off to one of his trusted followers, Gerald de Windsor, the Constable of Pembroke. To modern women this act seems outrageous, that Nest was deemed to be a mere chattel to be so 'disposed' off in this way and it is unlikely that her own feelings were taken into account. But it must be pointed out that in those days it would have been a very advantageous match for her, especially as she was now no longer 'entire', as it were.

On the face of it it would seem that Gerald and Nest were content with their lot. Nest was reputed to be clever and spirited as well as beautiful and, as a Welsh princess and the king's ex-lover, she could be considered quite a prize for Gerald. They went on to have at least five children who all became important people in their own right and one of Nest's grandchildren became the famous Welsh historian, Gerald of Wales (Latin: Giraldus Cambrensis). But their apparent domestic bliss ended abruptly during Christmas 1109 when they were visited by Nest's cousin, the wild Owain ap Cadwgan. It is entirely possible, of course, that Owain, having heard the bards singing of Nest's phenomenal beauty, used the excuse of kinship to check it out for himself. Whatever the true reason for his visit, it was a visit that was to end in mayhem.

It is rumoured that Gerald had got used to his warriors falling in love with his wife but at least he could keep them under control. The tempestuous Owain was obviously another thing altogether; he saw Nest and instantly wanted her. It seems entirely possible that Nest might have suspected Owain would try something, and, whether it was female intuition or some incident that had happened between her and Owain in some dimly lit passageway of Cilgerran castle, her subsequent quick thinking saved her husband's life.

It is unclear whether or not Owain was staying in the castle overnight or whether he and his henchmen broke in under cover of darkness. Setting fire to an area of the castle near Nest and Gerald's bedchamber, they raised the alarm and Gerald got up to see what all the furore was about. Nest, obviously suspicious of treachery, implored him not to go out of the room. Instead she prevailed upon him to make his escape down the garderobe, the toilet shute that opened straight from their bedroom down the castle side into the woodland below. Some sources say he climbed down a rope and as Cilgerran castle sits high on the top of a perpendicular rocky crag above a river, it would seem a necessary item to have handy to achieve an escape. Unsavoury though this means of escape would be it most certainly saved Gerald's life. The one fact that tantalises historians is whether or not Nest was complicit in her own abduction. If it is true that Gerald did climb down a rope to freedom, it seems an unlikely thing to keep conveniently to hand in a bedchamber, unless someone was expecting such a thing as an attack. 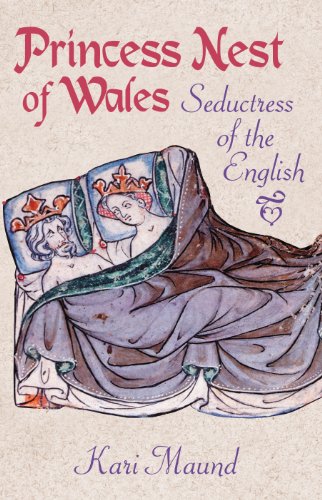 So Owain carried Nest off into the night and apparently took some of her children as well, though these were later returned to Gerald at Nest's request. One intriguing reference quotes Nest as telling Owain that if he wanted to keep her faithful to him he had to send the children back to their father. Whether that was to keep them safe from the volatile Owain or to have them out of the way of this new love affair is unknown.

Nest was to spend several years with Owain as his mistress, during which time she bore him two children, Llywelyn and Einion. And although it is not known for certain whether or not she loved him, I like to believe that he, at least, loved her during those years. He did not seem to have tired of her as was often the way of the powerful men of the time. And perhaps, despite the highly unconventional start to their relationship, Nest did come to love her wild Welshman.

The consequences of the abduction.

As usual there is no happy ending for such flagrant criminality. Henry Ⅰ, King of England, Nest's ex-lover and Gerald's friend and sponsor, became enraged when he heard of the abduction. So much so that in fact a minor civil war ensued, and for that reason Nest has become known as the Welsh Helen, after the war that was caused by the abduction of Helen of Troy. Eventually things got a little too uncomfortable for Owain and he had to leave Nest and flee into exile in Ireland. Nest, with her two sons by Owain, was duly returned to Gerald. But Gerald never forgot or forgave Owain; this was not an age that forgave such public and humiliating slights.

When Owain returned to Wales sometime later on the orders of King Henry, ostensibly to help him arrest some other Welsh miscreant, Gerald was somehow informed of Owain's whereabouts and setting an ambush for him, Gerald killed him. What such revenge meant to Nest we can only guess.

The end of the story.

Gerald died around 1116 and Nest went on to either live with or marry (records vary) Stephen, the Castellan of Cardigan, with whom she produced yet another child, Robert FitzStephen. As keeping historical records was far from an exact science in those days, and of course many records will have been inadvertently lost or destroyed over time, we are not entirely sure how many children Nest actually did produce during her lifetime. Some sources believe she could have had as many as eleven children to the four different men with whom she lived. Many of her sons became Welsh princes in their own right and as such continued to menace the English crown. Some invaded Ireland and carved out new kingdoms for themselves there.

All that is known of Nest after her marriage or co-habitation with Stephen is that she died sometime after 1136. She had been a great beauty and a much-desired woman ... we can only hope that she was also truly loved.

For more detailed information on Nest and her progeny see: http://www.pembrokestory.org.uk/princessnest.html

For photographs of the beautiful Cilgerran Castle see: http://www.castlewales.com/cliger.html

Although we will never know what the Princess Nest looked like, I would like you to choose a face from the video below that most equates to how you picture this remarkable woman.