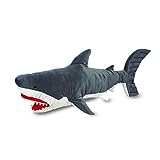 Here are some fascinating facts about great white sharks especially for kids.

Apex predator means being top of the food chain; it means having no enemies that can't be beaten.

The only creatures in the world that can kill great white sharks are orcas and humans, though this wasn't the case a couple of million years ago when megalodon sharks ruled the seas.

While there are many wild animals on land that are extremely dangerous to humans, ultimately humans are more powerful because we have developed weapons to use, and are not dependant on physical strength alone.

Many of our seas are filled with dangerous sharks, but the largest predator of all is the white pointer, which is another name for the great white shark.

The only sea creature that could possibly match the strength of the white shark is the orca, which is another name for the killer whale.

Orcas aren't even whales, they are dolphins, but they kill whales which is why they are called that.

They have a very important role in keeping the oceans clean. They not only eat, or at least take a bite out of, anything that is in the ocean, they eat weakened, sick or injured sea creatures.

This ensures that none but the strongest survive.

You will have heard of the expression "Survival of the fittest"?

In the seas and oceans of planet Earth, this is especially true. There are no undersea doctors and surgeons to patch fish up when they are injured or sick.

Great white sharks, known scientifically as Carcharodon carcharias, are white underneath and grey on top.

Their sides can have a a blue or brown tint.

Their tail fins have two lobes of equal size, and their snout is conical shaped, like a pyramid lying in its side.

Their mouths are wide and lined with serrated and pointed teeth that are designed for gripping and ripping.

Great white sharks attack prey from below. The victim will never see a flash of white as this huge fish rises rapidly towards the surface like a torpedo. Their blue-grey uppers are perfectly disguised in (and by) the sea.

They frequently breach the surface of the water as they catch their prey.

How many teeth do great white sharks have?

Just behind this row of teeth, they can have between 5 - 7 rows of teeth ready to move into the frontal position should the shark lose a tooth, which they do, every other day.

The number of rows grow all the time. As a tooth is lost at the front, so more grow right at the back, so that the shark is never toothless at the front.

So at any one time, a great white shark can have 350 teeth in its mouth, but over a lifetime will go through thousands of teeth.

Sharks need their teeth because they use their mouths for everything.

Unlike us, they have no hands, nor have they flippers like dolphins.

When they come across a strange object in the ocean, they use their mouths to bite it, to test and see what it is.

This will explain why sharks have probably accidentally ingested inanimate objects like metal plates and car tires. Once in their mouths, it is easily swallowed, even when the action is not intentional.

How big do great white sharks get?

Great white sharks can grow to 20 feet (6m) in length, but they are typically smaller.

Tales of great white sharks reaching lengths greater than this are greatly exaggerated!

A 20 foot long great white shark is huge! At that size it will be six feet tall and eight feet wide.

How to convert Centigrade to Fahrenheit

Where do great white sharks live?

They avoid the red areas of the map shown (which signifies sea temperatures of 25 - 30 degrees centigrade), preferring the cooler yellows and greens.

Scientists tell us that great white sharks prefer to live in the cooler waters of 12 - 25 degrees C.

Look at the map and you will see the sea temperatures throughout the globe, the red signifying warmer waters.

From the map, we can see that great whites live in the

Great white shark diet - what do they eat?

Everything, would be the correct answer.

When their bellies have been cut open, tin cans, old tires, metal plates and signs and all sorts of inedible junk have been found inside their stomachs.

Their main diet, however, is fish, seals, dolphins, other sharks, crustaceans, turtles, sea otters, whales and even sea birds (they can leap out of the water).

Everything in the sea is a potential meal to the great white, including its own offspring if it is hungry enough.

Do great white sharks have predators?

The orca, also known as the killer whale (even although it is actually a member of the dolphin family) can kill the great white shark.

They do this by butting the great white shark and rolling it onto its belly.

In this position, the great white shark becomes paralysed and unable to fight off its attacker.

Bigger sharks can also attack and kill the great white. They could even be other great whites.

Man could be considered to also be a predator, though we do not live in the seas.

All sharks need to sleep.

While some rest on the ocean floor, others can 'rest' one side of their brain at a time, allowing the other side to remain alert for predators or food, while moving through the water.

It is widely believed that great white sharks have this ability. It is certainly known that they cannot rest in one position for long, as they need to move to keep oxygen flowing through their gills.

If one side of their brain effectively shuts down, allowing the other to take over, then great white sharks do indeed sleep, probably during periods after they have fed well.

While some sharks have a circadian rhythm that require them to sleep at definite intervals, like humans, it is unknown whether or not the great white has this need.

It is unknown exactly at this time, but it is believed that great white sharks can live for 30 years or more.

They do not start reproducing until they are about 14-15 years old, just like humans.

It is possible that white sharks can live as long as us!

Hopefully this is something we will learn in our lifetime, as more and more sharks are being tagged and observed by scientists.

How do great white sharks reproduce?

Scientists are still learning about the reproduction cycle of the great white shark, but it is known that the female is pregnant for 11 months, and that she gives birth to live young.

She starts off with fertilized eggs that hatch while in her uterus. The unborn baby sharks then eat each other to survive, as there is no placenta and the mother shark does not offer any sustenance to her little ones.

Out of hundreds of eggs, only 7 - 9 shark pups survive to be born.

Most shark pups are born in spring and summer, and then the mother shark just swims away and leaves them to defend themselves!

Of course, by this time, white shark pups have honed their killing skills and should be able to hunt for food themselves, though most of them end up getting eaten by other sea creatures before they get the chance to grow into bigger fish.

No, they are fish.

The word 'mammals' is derived from the Latin word 'mamma' meaning "teat" or "pap", and refers specifically to mothers who produce milk for their young.

The great white shark, who is quite possibly the worst mother in the world, does not do this, and so she is a fish.

In fact they have eaten more people than any other shark, apart from maybe Oceanic whitetips who are known to have eaten shipwrecked sailors at sea, although they are not usually aggressive.

Great white sharks are the garbage collectors of the sea.

They eat almost everything, and in doing so, help keep the oceans clean and free from natural pollution. (man-made pollution is another thing entirely).

Great whites eat dead, sickly and dying sea creatures, as well as just about everything that moves, and even things that don't move!

When it comes to humans, however, the great white has probably never seen a human before, and may well take a 'test bite' to see what we taste like.

Most great whites take one bite and then leave well alone because we are not salty enough for them and have too many bones, but if they are hungry enough, they will come back in for the kill, like they do with seals and sea lions.

Unfortunately for us, the bite of the great white shark is so severe that we suffer horrendous injuries and sometimes die, from just one bite.

How many great white sharks are there?

Scientists just do not know.

It is only recently that scientists have started tagging sharks to track their movements at sea, and to help learn more about them.

All they do know is that there are less white sharks than there used to be. Like all sharks, the great white is being fished to extinction, mainly for its fins which are used as a delicacy in Asia.

The great white shark is now classified as vulnerable on the IUCN list of endangered species.

IUCN stands for International Union for Conservation of Nature.