Finding Balance in the Classroom

It seems to be the American way to discard the old in order to replace it with the new. Rather than renovating an old building, it is torn down, and a new building is erected in its place. Rather than washing and reusing Tupperware or glassware to store last night’s leftovers, we use the new, disposable ‘use once and discard’ plastic containers out on the market. And when an educational philosophy isn’t working, we discard it and replace it with a shiny, new, often completely opposite, philosophy. What the designers of the new philosophies don’t recognize is that when we build that new building or design that new container, the new design is based on the good qualities of the old. In Experience and Education, John Dewey uses that very method of using the old to design the new when he sets out his plan for designing a philosophy of education based on experience. John Dewey’s philosophy of experience is therefore practical and timeless.

Dewey’s philosophy is practical and timeless because it allows for growth in the midst of constant change. Our society is always changing. Now more than ever, it is changing at a more rapid pace. Dewey believed that education needs to make students ready for the changes that will inevitably occur. Educators have a difficult time keeping up with all this change. News stories portraying the problems in today’s schools, an increase in standardized testing, and a constant call for policies that will increase achievement and success in the classroom are evidence of that difficulty. In my opinion, one of the reasons they have a difficult time keeping up is because they are stuck on one extreme end or the other of the dispute between traditional education and ultra-progressive education. Dewey falls into the middle of this dispute to point out that because of constant change in our society, one extreme can’t exist without the other; there must be a happy medium, or balance, in order for education to be continually successful. The past does not end in order for the future to begin; the past flows into the future. Dewey explains this well when he says of the learner: “What he has learned in the way of knowledge and skill in one situation becomes an instrument of understanding and dealing effectively with the situations which follow” (Dewey 44).

Simply put, Dewey’s philosophy embodies the idea that the past is made up of experiences, and those experiences teach us lessons that influence and shape our future. I find this idea to be practical and useful because Dewey arrived at this idea through the scientific method. As Dewey points out, “scientific method is the only authentic means at our command for getting at the significance of our everyday experience of the world in which we live” (88). He points out that one should use this premise to design not only a philosophy of education, but to design all aspects of education right down to the daily lesson plan of every subject. In this way, I find that Dewey is also timeless. His straightforward idea has been used and will continue to be used in designing the philosophies of education for the future. It is not a concrete, step by step plan, but instead a fundamental idea that is the seed of educational philosophy. 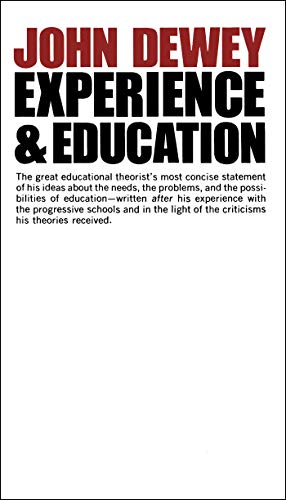 Gardner picked up on the idea that the educator needs to understand the needs of his students at any given time in order to create meaningful learning experiences that accommodate those needs. Gardner used Dewey’s idea of experiential continuum to create his philosophy based on multiple intelligences. Experiential continuum is the “attempt to discriminate between experiences that are worthwhile educationally and those that are not” (Dewey 33). In other words, all experience is not educational. Experience must be relevant to be educational. Gardner believes that the educator needs to know how his students learn in order to make experience relevant.

The focus of Adler’s philosophy seems to be an attempt to use Dewey’s ideas to create a more concrete model for implementation in the schools. Adler picks up on the idea that learning through experience, or doing, is the most successful method. He emphasizes Dewey’s idea that “knowledge of the past is a means to an end, not an end itself” (Dewey 23). Adler calls attention to Dewey’s ideas of social control in his plan as well. Adler believes in Dewey’s idea of the teacher being the facilitator rather than the dictator of the learning experience.

Don't fall into the status quo of the INSTITUTION...

John Dewey’s educational philosophy of experience is practical and timeless. It is practical because it finds the balance between the extremes in educational philosophy by using the scientific method. It is timeless because it is not concrete, but adaptable to change. Dewey’s practical and timeless philosophy will continue to be a force in education because “educational reformers and innovators alone have felt the need for a philosophy of education. Those who adhered to the established system needed merely a few fine sounding words to justify existing practices” (Dewey 29). In other words it provides a philosophy that can be utilized by leading educational reformers, such as Gardner, as well as by students and teachers, such as I, who don’t want to fall into the status quo of the institution.