The fire shrimp is one of the most spectacularly colored ornamental shrimp in the marine aquarium industry. It is a deep, almost blood red throughout its body with white appendages and white dots scattered across its side.

About the same size as the scarlet cleaner shrimp, it will reach a length of no more than 3 inches. Heavily collected from throughout the Indo-Pacific region due to heavy demand, it is a slightly more expensive marine shrimp.

Like the scarlet cleaner shrimp, the fire shrimp is another member of the lysmata genus that performs the crucial role of ridding fish of parasites. It will typically embark upon the fish as it crawls about looking for parasites to feed on. Due to the service it offers in the wild, it does have some immunity from predation as most fishes recognize the fire shrimp for what it is.

But there will be exceptions. Certain types of fishes such as lionfish, scorpionfish, anglers, some groupers as well as triggerfish may attempt to consume it. While it is generally peaceful, the fire shrimp is also exceptionally shy. It prefers caves and overhangs and is almost never seen out in the open unless feeding. As such, the fire shrimp can be a frustrating species to keep as its shy disposition doesn't offer the viewer much change to appreciate its beauty. 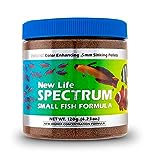 Fire shrimp are primarily carnivores that will consume anything meaty.

While shy initially, they will openly feed from your hand over time.

They will eat everything from pellets to flakes to frozen brine shrimp.

They will also feed on any isopods and amphipods present.

On the topic of the quality of pellets, fire shrimp tend to get by being fed almost any type of pellet.

While many efforts have been made to breed the fire shrimp, only a few have succeeded. The problem seems to lie in raising the larvae. To date only a handful of large scale commercial breeders achieve success with regularity.

Fire shrimp are able to change from male to female depending on the situation. This ensures that two random shrimp have the potential to pair up and eventually mate.

However, pairing fire shrimp is a little tricky as they don't seem to like sharing territory with other members of the same species. It is recommended to purchase two similar sized fire shrimp when attempting to pair them. Two shrimp of unequal size will likely see a lot of bullying by the bigger one.

Once they have been paired, they will spawn in captivity very often. Only those with the suitable food (Brine Shrimp Nauplii, Copepods) and grow out tanks will attempt to raise the larvae. Owing to the fact the cleaner shrimp is comparatively reasonably priced, many companies tend to bypass this species. The task is left to smaller breeders as well as hobbyists.