First Nations and Diamond Mines of the Glittering Northwest Territories

Some cannot imagine living on the Arctic Circle, but over 42,000 individuals live there in Canada's Northwest Territories.

They enjoy the glittering lakes, the Northern Lights, bright snows in the winter, and city lights every night. Canadians know the capital, Yellowknife, as the Diamond of North America, because workers mine diamonds here.

Hearing that the NWT reaches the Arctic Circle, we might imagine a territory including only glacier fields and white expanses that cause daily snow blindness, but we would be incorrect. We might envision lone igloos set up miles apart, full of fur clad families and packed with sled dogs but again, we would be wrong.

There are no Eskimo here, but the NWT is home to a few First Peoples that have actual ethnic names like the Dene, the Inuvialuit, and the Metis First Peoples or First Nations. With them live people from over 90 other different countries in the NWT.

A whole new world functions above the United States at the top of Canada, and many Americans know nothing of it. What fun to visit there!

Through the NWT Seniors Society, tribal elders and others in the Arctic Ambassadors program greet travelers at the Yellowknife Airport in order to greet them and give them directions and suggestions for visits.

Canada contains six active diamond mines, four of which are all in the Northwest Territories. 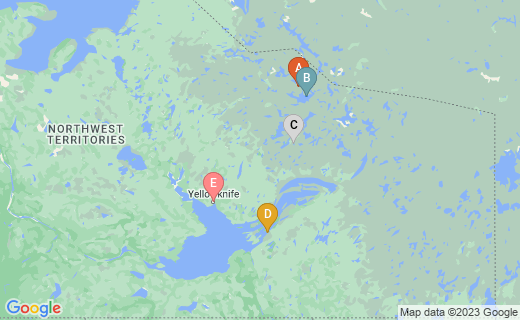 Average Seasonal Temperatures in the NWT

This cultural center presents the history of two large diamond mines, the Diavik and the DeBeers Snap Lake Mines, both of which are 190 miles north of the city. Diamonds were not discovered in NWT until 1990, but have added much to the local economy, along with mining for other minerals, which has a longer history - this includes gold, now in decline, but also uranium and others.

Mining diamonds in the Arctic is different from mining in South Africa diamond mines. The diamond center shows us some of the local geology of NWT, especially that of diamond containing kimberlite deposits (named for a South African town), along with the technologies needed for mining in the cold weather. The process of extracting rough diamonds and creating polished and cut gems is fascinating as it is explained at this museum.

The newest mine in the area is the DeBeers Gacho Kue and First nations in this area north of Yellowknife filled letters at its inception to request adequate measures of environmental protection be ensured in mining operations. Prime importance is the impact of mining on the local caribou herd, which is a large part of indigenous livelihood (Reference: Northern Journal. Meaghan Wohlberg, August 13, 2013).

The Northwest Territories geology holds at least 150 volcanic kimberlite pipes, which are often home to diamonds. These mineral pipes were recorded by geologists in 1997.

A Few Stops on the Ice Road that Connects Diamond Mines 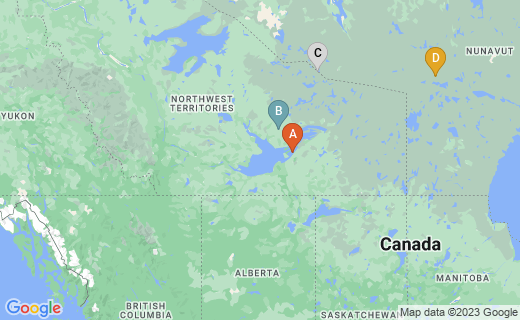 The Tibbitt to Contwoyto Winter Road is an ice road in NWT that has been featured on Cable TV in Ice Road Truckers. 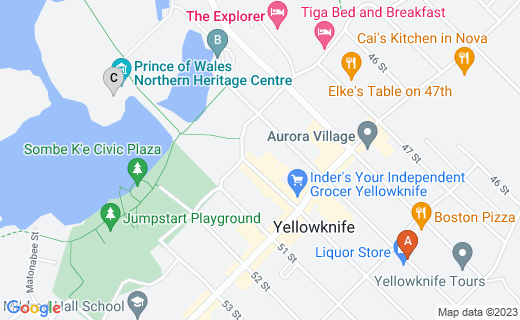 The First Nations of the Northwest Territories are very well organized in democratic governments in towns that have economic development agencies, cultural and arts institutes, museums, festivals, recreation, and all manner of things found in large cities in Canada and the USA.

The languages spoken by the First Nations of NWT include Cree, Dene, Inuktitut, and Ojibway, as recorded for the 201 Canadian Census, but other indigenous languages are found in the MWT as well.

Historically, the five separate Tribal Groups in the NWT that signed a treaty with Canada in 1970 were: the Dogrib, Chipewyan, Southern Slavey ("slaves of the Cree"), Northern Slavey and Loucheux. They became the Dene Nation in 1975. The umbrella Dene Peoples in NWT include are named for their language dialects: Akaitcho, Dehcho, Gwitch'in, Sahtu and Tlicho, all of which became official languages of the NWT in 1990.

The Metis People incorporated as an official group in 1972. These are individuals that are have descended largely from intermarriage of Dene Nation peoples and European settlers in the NWT. They are an incorporated First Nation of their own.

Canada 2011 Census of Aboriginals in NWT

This group is a permanent member of the Arctic Council in partnership with Gwich'in groups in Alaska and the Yukon Territory. The Arctic Council is an international group founded in 1996 to promote cooperation among and the rights of Circumpolar Nations around the Arctic Circle (60° N. Latitude). Besides Indigenous Peoples and other northern nations, Canada and the USA are members.

Accessible only by air except for months in which an ice road functions well and connects with Highway 3:

Major Communities on the Map

Some Aboriginal Communities in the NWT 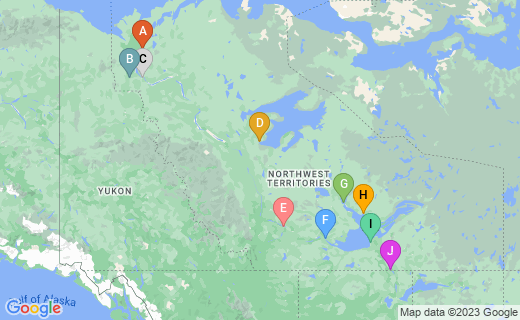 Located on Great Bear Lake, with many tourist opportunities.

The Dene Nation at Deline NWT and the Northwest Passage

Deline officially claims the invention of the Canadian National Sport of Hockey. It is also home to the biggest lake trouts in the world, and is also the only community on the western shore of Great Bear Lake (see the accompanying map), named for Nanook. Air access is the only option for traveling to and from Deline, so airports are well maintained.

Deline is a community of Sahtu Dene and Metis Nation Peoples who speak a North Slavey language or dialect of the Dene language, along with English.They operate many travel related business and enjoy having visitors from all over the world.

Hockey Invented Out of Boredom

It is well known that during the winter of 1825 - 1826, above the Arctic Circle in Deline, Sir John Franklin and his crew searched for the Northwest Passage. Today, enough ice has melted that the passages are visible and used by freighters.

The Franklin crew stayed the winter among the Aboriginals at a Hudson’s Bay outpost called Fort Franklin for his good will toward the peoples in NWT. His men had brought ice skates with them and had always loved field hockey. Thus, the Franklin crew combined the two on the thick ice of an Arctic winter, not realizing that they were making history.

Today's Dene People say this about that event:

“The elders we knew . . . they didn’t say 'hockey' or 'skating' - they didn’t know what it was. But they said they saw these guys flying across the ice like they were floating. That’s how they would express it,” -- Morris Neyelle, Elder of the Dene in Deline. (Reference: http://destinationdeline.com/deline-northwest-territories-canada/)

B. Dene Adventures is a Traditional Dene Cultural Camp business which teaches the Dene way of life, with many package and day-tours available - fishing, Aurora Borealis viewing, etc.

Deline , the Only Village on Great Bear Lake 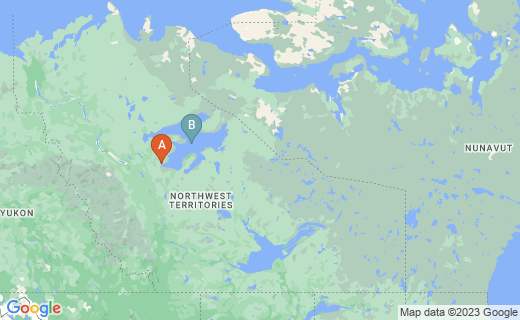 The Inuit People have lived in Siberia, Alaska, Northern Canada, Greenland and even Iceland, where Inuit DNA of the past was recently found.

Inuits in NWT and Nunavut and Nanook the Bear

Inuit Peoples live in parts of NWT that extend into the next territory to the east, Nunavut. Most live more modern lives that their ancestors did in the time of igloo communities, but plenty of snowshoes, sled dogs, and hunting can still be seen.

Filmmakers made Nanook of the North in the early 1020s as a documentary of Inuit lives. It was not totally a reality film, but actors were Inuits and scenes that were staged gave an accurate view of general life. A cutaway igloo, for example, was a very good idea for showing the inside of a dwelling.

Nanook is a founding power animal in the history of the people of the far Canadian north. The bear needed to give permission for hunters to slay bears for their livelihood. This included food, clothing, blankets, and trade. Each approved hunter was worthy - a good steward of nature.

The Great Bear can be seen in indigenous artworks, as it can in Western Canada on carved cedar poles and in paintings on longhouses. The poles are considered people that are telling stories from the beginning of each clan's founding. The Great Bear Nanook is a founder of the people in the far north of Canada.

In 1989, "Nanook of the North" was one of the first films selected for preservation in the United States National Film Registry by the Library of Congress. It was declared "culturally, historically, or aesthetically significant."

Cultural Anthropology and Entertainment in the World's First Documentary

Nanook of the North (The Criterion Collection)
This is the Director's Cut. In this tremendous 1922 silent film documentary, the Inuit hunter Nanook and his family survive the harsh winter conditions of Canada's Hudson Bay area. The director employed Inuit actors who were descendants of the ancient people who lived their lives in the outdoors near the Arctic Circle and who themselves continued to live there.
Buy Now