Stella Adler, an actress and producer, founded this school in 1949, first under the name of The Stella Adler Theatre Studio. I've taken classes at this school, and I really enjoyed the time I spent there, and feel as if the concepts I've learned have greatly improved my acting career. Located on 27th street in Manhattan, the studio offers a full time conservatory program, as well as part-time workshops for adult and teen actors. In my opinion, the prices are reasonable when compared to other schools. Most classes are a first come, first served basis. There are a few of there courses that require an audition. They also have a location in Los Angeles. For more information, visit their site at www.StellaAdler.com.

The New York Film Academy is an expansive school , founded in 1992 by Jerry Sherlock. They offer extensive programs in film making, acting, screenwriting, photography, cinematography, 3D design, broadcast journalism, game design, documentary film making, digital editing, and digital film making. NYFA has developed into a worldwide academy, with locations in four states in the US and nine other countries . NYFA offers short term, one week workshops, as well as long term training. They also offer accredited Bachelor's degrees and Master's degrees. NYFA offers many financial aid options, including Title IV Federal Funding. The classes are an immersion in the craft and offer an extremely "hands-on" approach to learning.
They offer classes for tweens up to adults. NYFA holds monthly open houses and will allow you to sit in on a class. For more information, visit their site at www.NYFA.com.

Actors Connection is a place that offers classes, showcases, and seminars that relate to all areas of the entertainment industry. Occasionally, there are even auditions held in their studios by outside companies. Their classes and workshops are very affordable and normally last anywhere from one day up to six weeks. They even occasionally offer free seminars for actors. Actors Connection was founded in 1991. They have a special 7-Day LA connection program in which you get to explore the West Coast so that you can decide if you like it there or not. They offer classes for ages 18 and up. For more information, visit their website at www.ActorsConnection.com.

The Julliard School is one of the most famous, oldest and most prominent schools in the country. It is also a very difficult school to get into, with less that a six percent acceptance rate for over two thousand applications in 2011. It was founded in 1905 as The Institute of Music, then later named The Julliard School after adding a dance division in 1951 then a drama division in 1968. The Julliard offers programs for children in elementary school up through adult level courses. Auditions are required for applicants, and tuition with room & board starts at $50, 000 per year. The school offers many scholarship programs and accepts financial aid. Julliard's drama program is considered one of the best training programs for actors in the English-speaking world. For more information, visit their site at www.julliard.edu.

How to Be a Working Actor, 5th Edition: The Insider's Guide to Finding Jobs in Theater, Film & Television
Buy Now

There are many more schools in New York City to choose from. Always remember to do a lot of research on any school. If you can, visit the campuses of the schools you're intersted in. Talk to alumni and check with the Better Business Bureau. Check to see if they have positive or negative news reports, and any awards and/or recommendations. And also, talk to seasoned actors. If the school offers you a chance to audit a class, go for it. You could also look up some of you favorite actors/actresses and see what schools they went to. Don't let the expansive market of schools overwhelm you. If you can afford it, you could even opt for individual training with a private coach. But most of all, use common sense when selecting a school to attend. 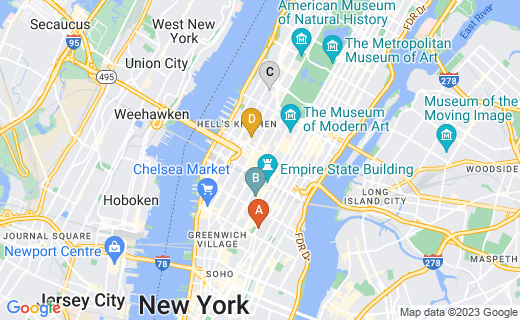