Chicago is the White City

Part of Chicago was renamed "White City" during the 1893 Columbian Exposition or World's Fair, because the buildings on the grounds were constructed of white stucco. Against the dark buildings of the city, the fairgrounds looked lit up already, but the addition of thousands of electric light bulbs made the illusion real at night. It was dazzling.

The White City was found around the marked areas on the map below and it became a much-used recreational area from 1905 all the way into the 1950s, about the time that famous local architect Frank Lloyd Wright died. 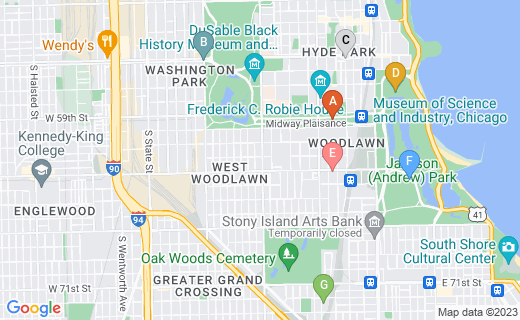 The Midway was taken over by the University of Chicago and can be toured today.

The Auditorium Building at 50 E. Congress Parkway in northern Chicago was the first building that Wright designed. It still stands north of the White City today. Frank Lloyd Wright was born in 1867 after the American Civil War, three years before my grandfather was born in 1870 to live on an Ohio farm with no running water and no electricity for decades. On the other hand, electricity became an important part of Wright's architectural work long before the Ohio farms stopped using candles and lanterns. Advantages of a Big City

In 1887, Frank moved to Chicago to be an architect, while my grandfather in Ohio at age 17 had been working the farm for nine years already, 12 to 16 hours a day. Parts of Illinois advanced more quickly in technology than did Ohio. Frank Wright became known in Ohio, however, and some home DIY enthusiasts imitated his work to varying degrees of success.

My father somehow came into possession of some Frank Lloyd Wright blueprints and these helped him to study drafting in college. I don't know how those paths crossed, but it must have been a good story.

Meanwhile, Wright and my grandfather died in the same year: 1959. Education certainly makes a difference in success. The first was famous, the second was unknown. The first attended high school and some college classes, going on to work for an architectural concern in Chicago until he could start his own firm. My grandfather was pulled from the third grade and did back breaking farm work until his 80s -- He never saw the White City, but he visited his share of county fairs.

The Chicago School of Architecture is not a school. It is a design style and styles were called schools in the 19th and early 20th centuries.

Another example is the word "House." One of my martial arts is named the House of Wisdom. House in that context means school and school means style. Chicago certain has had its own unique styles!

The Chicago style was often called Commercial Style from about 1890 to World War I, when Wright was becoming active in architecture, streamlining old hulking European designs and hanging everything in cantilever.

For comparison, just one state to the east, my grandfather was just getting running water and electricity into his farmhouses. He could have used Frank's help. Layout of a Wright House

The second floor room in the blueprint above is the dining hall of the Dana-Thomas house that Wright designed and built around 1904 before the Chicago's World Fair. He always constructed the furniture to go with the house and the Dana-Thomas work was no exception.

This dwelling is "prairie style" architecture, a more flowing space than the cookie-cutter little boxes that were coming into fashion, especially during and after World War II. Frank filled much of the Chicago suburbs and center city with this type of flowing work, adding a new chapter to Chicago Style.

One particular innovation that Wright introduced was the double-paned window that is sound proof.

Little boxes on the hillside,

Little boxes made of ticky tacky

Little boxes on the hillside,

Little boxes all the same, The Wright School in Chicago

The Robie House was built around 1908 in Chicago, and it is another example of prairie style architecture, with plenty of room. Wright designed commercial buildings and residences in and around the White City portion of the community from 1888 through 1908, but designed buildings elsewhere across the United States.

For an interesting visit, look at the "Student Work" page of the Taliesin website to view the jaw-dropping innovation of housing and landscape design that today's Wright students are developing. An Architectural Era Begins to Crumble

According to reporter Jay Koziarz in May 2019 in the Curbed Chicago publication, a famous Wright house was set for demolition instead of being honored with recognition as a National Historic Site.

Landmarks Illinois group released the news that the building's owners filed for a permit to tear down the 1913 Booth Cottage after 106 years of service and historic site seekers. it will be the first Wright installation destroyed since 2004.

The cottage was used by attorney Sherman Booth for three years until his house was built nearby by architect Wright. The house was listed for sale as of May 2019 for $1,150,000, with no plans for demolition. Local historical advocacy groups hope to save the cottage as well.

It seems that as famous as both the White City and Frank Wright have been, the interest in both were short lived.

Much of the exhibition grounds were leveled after the fair. Wright's works lasted longer, but at the century mark, his buildings had already begun to be pulled down for newer construction. This is a great loss, but photographs and books still preserve the images of both.