World War Two : How The French Resistance Fought Against The Germans?

The Battle of France in 1940 led to an astounding German victory. The Germans had invaded France on 10 May, 1940 and within a month, the French Army was catastrophically destroyed. Though numerically superior than the Wehrmacht, the French Army lost pathetically due to their military indecision, poor maneuvering skills and a weak Air-Force. Further, the German Army was led by able field Commanders such as Keitel, Bock, Rundstedt, Guderian and Erwin Rommel who acted on their discretion and smashed through the French defenses.

French Prime Minister Paul Reynaud resigned 16th June 1940. The next Prime Minister, Philippe Petain requested the Germans to sign an armistice. An armistice was signed on 22th June and thereafter, France was under total control of Berlin! France was divided into a German occupied 'North and Western France' and a 'Southern Free France'. The French Government headed by Petain was a puppet and was referred to as 'Vichy France'.

A Joke Showing The Existence Of French Resistance

The French people were stunned as the French Army had been destructed by the Germans in a few weeks! The new French President's collaboration with the Germans was viewed by some French as an intelligent thing to do at that time. However, for the patriotic citizens, it was time for a long guerrilla warfare!

In the first few months after the German occupation, there were incidents of French individuals getting involved in acts of sabotage, killing German soldiers when caught alone, etc. Slowly, small groups started to develop all throughout France.

The Cross of Lorraine was adopted by the Free French as their symbol in the struggle against the Germans.

Know More About French Resistance Against The Nazis 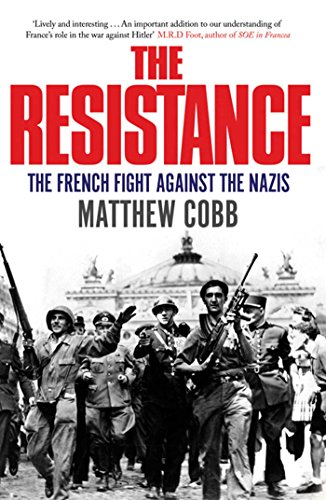 The Resistance: The French Fight Against the Nazis
Buy Now

Charles de Gaulle Speaking To Frenchmen Over Radio From Britain

The unorganized scattered Resistance movement in German-occupied France was slowly brought together into an organized form by Charles de Gaulle. He was a tank officer in the French Army and fought against the invading Germans.After France's official surrender to Germany, many French soldiers and officers fled to Britain, not supporting the surrender.

Charles de Gaulle also went to Britain and continued his fight from exile with the support of Winston Churchill, the British Prime Minister. On June 18th 1940, he made a historic speech via the BBC (British Broadcasting Company) -

"Is the last word said? Has all hope gone? Is the defeat definitive? No. Believe me, I tell you that nothing is lost for France........

.......Whatever happens, the flame of French resistance must not die and will not die."
Slowly with the help of the British and resistance organizations, de Gaulle successfully built up a massive network of a strong French Resistance. This network of gallant fighters weakened the German machinery from within. Thousands of French men and women helped the Allied invasion in Normandy to success. They signaled Allied planes for safe landing or to drop weapons/ammunition's to be handed over to Resistance fighters. The resistance network disrupted train lines, destroyed food, sabotaged phone lines and sent valuable information to Allied spies, etc.

The organized resistance network under the control of de Gaulle and acknowledged by America and Britain, the FFI (French Forces of the Interior) became a full fledged French Army after the Normandy invasion. An Armored division under this Army headed by General Leclerc was to liberate Paris from the remaining Germans.

Paris was finally liberated (on 25th August, 1944). Charles de Gaulle rode into Paris victoriously, with his hands making the "V" for Victory sign.

A Team Of Resistance Fighters

Modus Operandi Of The Resistance

Guerrilla warfare- The communists engaged in a number of guerrilla attacks against the Germans after the German invasion of the USSR (The French communists owed their allegiance to Stalin and not to de Gaulle or the Allies). Their killing of Germans caused hundreds of French executions and the communists soon stopped such assassinations.

Intelligence- Intelligence networks gathered military/strategic information such as Coastal Fortifications, Army deployments and their strength. The various Resistance movements in France sent regular intelligence reports to the British to be recognized. By 1944, the British headquarter was receiving thousands of telegrams and enemy plans. Many radio operators died after they were located by Germans.

Sabotage- It was a form of resistance adopted by French nationalist groups who wanted to seek revenge.

Role of the Media- One of the pillars of the French Resistance movement was the publication and distribution of newspapers. It was a hard thing to do because materials like paper, ink, etc were hard to collect. After the successful formation of an elaborate Resistance network, the underground newspapers became rapid, it aimed at spreading hope and positiveness among the citizens, that the Allies would come and defeat the Germans.

About 3,00,000 prints of pro-Allies-newspapers reached around two million readers by 1942! Some of them are-

Books were published and distributed to raise up the social morale. One such book was the Les Éditions de Minuit. A novel known as Le Silence de la Mer (The Silence of the Sea) written by Jean Bruller became a symbol of French resistance. The story was about an old man and his niece who refused to speak with the German officer who occupied their house.

Some publications advised specific things to specific people. Some of them are-

The Free French Flag With Cross Of Lorraine And Jean Moulin

Some Stalwarts Of The French Resistance

Women Were Active Fighters In The Resistance