Before going to college, Richard F. Fleck grew up in Princeton NJ and summered along the coast of Maine northeast of Boothbay Harbor.

167 Nassau Street was the location of bookshop

Almost every customer who visited Parnassus had or has fond memories. The poet Bruce Berlind (now with Colgate University) has written in a letter to me that he can remember the layout of the shop as though it were yesterday. He remembers the $2.00 poetry book table; if he had bought out that table of books and held onto them since 1944, he would be quite wealthy! But permit me to share some of my memories of the customers themselves.. Erich Kahler (pictured above in 1944) encouraged me to become a writer, no easy task to be sure. But I treasure his encouragement especially considering I was only 7 or 8 years old when he gave me this advice.

My mother and father greatly enjoyed talking with him. He was a true humanist. He was a man of compassion though Hilter had none for him. He took the trouble to answer the simplest of questions. My mother asked him if Albert Einstein ever came back to this little planet of ours in his thoughts and meditations. Dr. Kahler smiled and said "yah, yah, he did indeed. Let me give you an example, Anne," he said. "There was a little third grade girl who lived a few doors down from Einstein on Mercer Street. She was having trouble in class adding fractions. Her parents suggested she go knock on the door of Albert Einstein because he was a great mathematician. She did so. Dr. Einstein said 'Hello, what can I do for you?'She said,"I can't catch on how to add fractions.' 'Well, he said jokingly, 'how much can you pay me?' 'How about a grape lolly pop?' 'Fine,' he said. And so Dr. Einstein tutored the little girl on how to add fractions until she understood." What a tutor she had!

More mirthful memories include John Berryman's walking by Parnassus one evening when he saw the light of a slide projector flashing on and off. He stared through the window to see images of Baffinland, Canada on the screen. We were having a private showing of pictures taken by a professional photographer on the MacMillan Expedition to Baffinland and Greenland earlier in 1947. Berryman sinked in and sat in a corner to continue watching through his thick glasses.. Finally question time came and it was John Berryman, the uninvited guest, who had the most questions of anyone for the photographer.

Before the Monday Evening lecture/reading series had begun, we wondered how we could seat a crowd of forty or fifty people. My father came up with the idea of renting folding chairs from Kimball Funeral Parlor. One night it was William Arrowsmith's turn to give a talk on Cicero, but when he noticed the chairs all had Kimball Funeral Parlor painted on them, he said to my father, "perhaps I should be giving a talk on Roman burial customs!"

Charles Bell, writer and physics instructor, loved to charge up the stairs as though he were Teddy Roosevelt at San Juan Hill. He got into the habit of charging up the stairs to go to the bathroom whether at Parnassus or even at Dr. Kahler's home. One time, he said, he paid for this strange behavior. He had an apartment in the attic of an old Victorian home that had a trap door entrance. He charged up three flights of stairs only to bang his head fiercely on the closed trap door. No more charging up the stairs after that!

Bernard Ryan, an undergraduate poet who produced a privately printed collection of poems of fellow Princeton Poets including Merwin, Kinnell, Berlind, himself and others, got my father to stock a pile of these books on consignment at Parnassus. They sold reasonably well. I believe its title was Bread in the Bone, edited by Bernard Ryan. He had a few graduate student friends, one with quite a sense of humor. The grad student entered a conversation my mother was having with Erich Kahler on Nature's ability to adapt. The student said, "isn't it wonderful how nature has made mountain goats with two short legs and two long legs on each side of the creature--that way he can go around a steep mountain easily." My mother repeated this statement with wonder to Dr. Kahler who roared with laughter and asked, "but what happens when he turns around?"

When W.S. Merwin heard years ago that I was contemplating writing a bit of a memoir on Parnassus, he wrote to me to say I must include the story of Harold Waggie if I ever do write up Parnassus. Well Harold Waggie was a technician of some sort at Princeton and he had a hobby of building church organs. He was a bachelor and lived alone on a spartan schedule. One evening he told everybody at Parnassus that he had to leave a bit early because he had to go and work on his organ. Of course, everybody had to hold back their laughter.

There were darker moments as well like the time R.P. Blackmur refused to attend a Parnassus lecture by the German Jew Erich Kahler. That left a very bad taste in everybody's mouth. And then there was the Jewish-American poet Sydney Monas who told us of his horrible experiences in World War II as a captive of the Nazis. Apparently the Nazis segregated Jewish G.I's from non-Jewish. Sydney was put into a concentration camp instead of a POW camp. No one was given a morsel of food. He had such hunger. Finally, he said "God,God," and grabbed a live rat scampering on the floor and ate it raw.

I will never forget the sad-eyed Dr. Robert Oppenheimer who once said that after he witnessed the testing of the first nuclear bomb at Alamogordo, New Mexico he said that in no way should we use such a device on human beings. He suffered such humiliation after recanting his work on the atomic bomb. It won the war, but at what price, he reflected. Curiously no nation has yet to repeat the use of nuclear weapons since 1945.... How can I ever forget these boyhood memories from Princeton well over a half-century ago.

Again, if the reader is interested in knowing more about the intellectual atmosphere of Princeton in the 1940s I recommend John Haffenden's biography of John Berryman. Parnassus Bookshop is mentioned a few times in this book. I recall the shame we all felt that Princeton University ignored Erich Kahler. 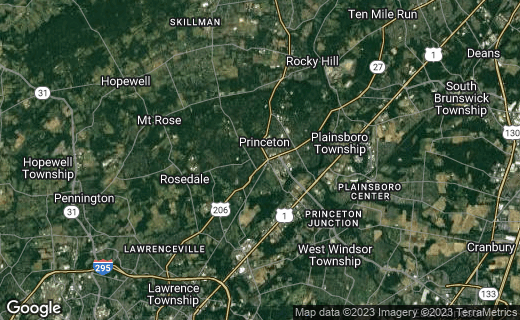