Genghis Khan and the Mongol Empire

James A. Watkins is an entrepreneur, musician, and a writer with four non-fiction books and hundreds of magazine articles read by millions.

Genghis Khan (1162-1227) was an evil genius and tyrant, a man who not only rejoiced in slaughter, but who also commanded the killing of innocent men, women, and children as his mounted minions raped, pillaged, and plundered wherever they went. For centuries Genghis Khan has been infamous as history’s most ruthless, genocidal maniac. Genghis was a huge man with cat’s eyes, who kept a harem of hundreds of girls. He was also responsible for implementing the first alphabet and postal system among his people.

The Asiatic Mongols were the most advanced fighting machine of their time; they not only had the world’s finest cavalry soldiers---but were considered by far the most brutal. Mongol soldiers survived both winter blizzards and summer droughts. They fought tigers with their bare hands, and were indifferent to suffering of their own or anyone else’s; they were cold, unfeeling, and mechanical. These soldiers were expected to fight to the death in all circumstances, and they did without question. Each soldier kept from twelve to thirty horses.

The Mongols featured a battlefield communication system; they used banner signals by day and flares by night. By the year 1300, the Mongols introduced gunpowder cannons, bamboo rockets, and incendiary grenades to the battlefield; they were indestructible in their acts of destruction.

All Mongol boys were trained early in the art of mastering a bow with 150-pound tension; a bow that could be fired with deadly accuracy from horseback at a distance of 100 yards. These soldiers could ride for days without food or water, and when necessary they subsisted on blood which was drawn from the veins in their horses’ legs.

Genghis proclaimed himself Khan (King) of the world in 1206, and within a decade he began his methodical annihilation of Muslim cities. The Mongol soldiers would hack to pieces every living person regardless of their age. Captured royal officials would die a slow and painful death as molten silver was dripped into their eyes and ears; their torture was also the means of their execution.

At the great trading city of Samarkland, Genghis slaughtered 50,000 people, and took another 100,000 as slaves. On his subsequent rampage through the countryside, Genghis burnt crops, leveled cities, and killed every living human being he encountered. He showed no mercy; he was in fact, merciless.

In 1221, the Mongols conquered the Christian nation of Georgia, killing all 70,000 of their soldiers. Next came Kiev, where Genghis butchered all 90,000 men in the opposing force. The Prince of Kiev was suffocated to death beneath the very same banquet table on which the Mongols would enjoy their victory dinner. In both of these wars, the Mongols used the tactic of a fake retreat to draw the enemy into chasing them---thus drawing their enemy into a well planned ambush by their much larger force.

The Mongolian cavalry rode for two years without ceasing; they covered a total of 5500 miles, and they conquered twelve nations in what is considered the most outstanding achievement in the history of war waged on horseback. Hence came the legend of the Mongol’s invincibility. At that point in time, it seemed as if all of Europe would be slaughtered, enslaved, or subjugated by the Mongols. It looked as if Genghis would conquer the world.

Batu, Genghis’ grandson, had so completely destroyed the Bulgarian capital of Bulgar, in the year 1237 that it was never rebuilt. 50,000 people died there. Next, they attacked Russia, where they hacked civilians to pieces, indulged themselves in the rape of little girls and nuns before killing them, skinned people alive. Other victims were impaled, and some were burned.

The Mongols destroyed Kiev in 1240, then the capital of the “Borderlands” (“Ukraine” in Slavic.) This splendid metropolis was reduced to a pile of skulls and bones; it was decimated, nothing more than a shell of a city, left and forgotten in the Mongol’s desire to destroy everything.

Next up for annihilation was Hungary. The Mongols slaughtered 60,000 of their soldiers on the battlefield before burning its capitals, Buda and Pest. The capitals themselves were burnt to the ground in 1241, and their citizens roasted alive on spits in the hope that they would reveal the locations of Hungary’s treasure. They then marched on to Vienna, Austria; shortly after, Mongol spies were seen in Croatia and Venice, setting off panic there as well.

The Mongol Horde also conquered Poland, where they obliterated the entire Polish aristocracy and army, as well as the Knights Templar and Teutonic Knights. They lopped the ears off the fallen to commemorate the victory; the ears filled nine enormous sacks. They burned down Moravia before inexplicably leaving Europe; every city they’d conquered had been left in ashes.

The Mongols had then decided that their next target would be to hit Islamic Persia. They devastated Baghdad in 1258, where they unleashed one of the biggest and bloodiest massacres known to human history. After the city surrendered, every living thing was killed including more than a million civilians. Baghdad, like the other cities, was then burnt to the ground. The caliph was sewn into a carpet, and then trampled to death by horses. Syria fell next to the Mongols. 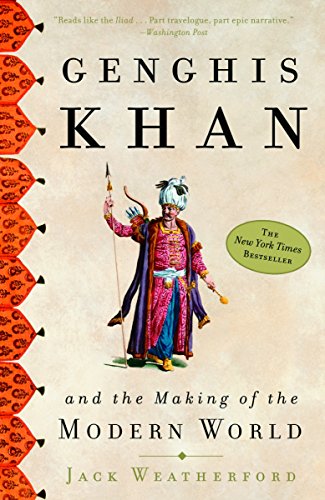 Genghis Khan and the Making of the Modern World
Buy Now

The Mongols were finally defeated in the Valley of Armageddon by the Mamluks from Egypt. The myth of Mongol invincibility was now destroyed forever, and Islam began its resurgence from the near oblivion to which the Mongols had reduced it. Since Muslims were the only people to ever defeat the Mongols on the battlefield, speculation was that perhaps God really did favor Islam.

My source for this article is the fabulous and highly recommended series "The Christians."