Great Britain and the Invasion of the Germanic Tribes

The sustained immigration and invasion of the Germanic tribes into Britain changed the entire social, racial and political make up of the British Isles. Germanic tribes such as the Angles, Jutes, Saxons and Frisians all took advantage of the Roman Empires gradual withdrawal of their imperial legions. They were able to claim vast tracks of fertile land or to raid the defenceless riches of Romano-Britain's civilian settlements .

The first Saxons to visit the British Isles were paid mercenaries who were invited by the Romano-British elites to help protect their weakened borders from the indigenous population of Britain who had been forced to the remote corners of their island. The ancient Britons had been forced into the west or far north of the British Isles. Now the Picts, Scoti and other Celtic tribes wanted back their land back and to liberate Roman gold and silver from people who shared little in common with their ancient way of life.

Origins of the Germanic invasion. 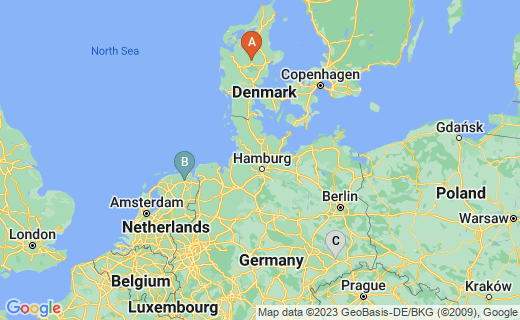 The Jute's originated from this area, and settled in the modern English county of Kent.

B
Groningen:
Groningen, The Netherlands

The Fresian people set off from this area in modern Holland and settled the middle and northern parts of the British mainland.

This area is where some Saxon tribes settled, they inhabited a much larger area which included coastal ports in modern day Poland.

The earliest German settlers actually came to the British Isles because of the Roman Empire. The Roman Empire had a policy of recruiting soldiers from the lands they had conquered and occupied. This provided the Roman legions with trained auxiliaries and kept the newly conquered lands from rebelling as their fighting men would be in another part of the Roman Empire actively engaged in warfare. By 367 AD the Saxons had deserted the Roman cause and allied themselves with the enemies of their former paymaster. The Picts and Scoti of Scotland were then able to launch numerous raids on the northern frontier of Roman Britain.

As Rome lost its power and influence, Saxon mercenaries began to launch pirate raids much like the Vikings would employ a couple of centuries later on the British coast. In 428 AD the High King of the lower settlements Vortigern, invited the warriors Horsa and Hengist to fight on his side against other foreign invaders. When King Vortigern asked his allies to leave the Saxons refused and war soon broke out between the former allies.

With such riches and fertile ground to be found. The Germanic warriors saw a future here in these foreign lands.

Conflict was a Great Equalizer

The Changing Shape of Germanic Britain

By the end of the sixth century AD, many of the native Britons had been pushed back into Wales and Cornwall. And due to the many battles, several Anglo-Saxon kingdoms had been created from the old landscape. The main three kingdoms to emerge were Northumbria, Mercia and Wessex. The Anglo-Saxons had effectively carved up the unprotected lands of the British in less than a hundred years.

In that time frame a lot of the Romano-British settlements were allowed to go to ruin and the Germanic tribes influence began to spread into every part of British life. The biggest change to impact Britain was that most of the pagan Germanic leaders converted to Christianity. Although it could be argued that this was only done to consolidate their own rule like Constantine had done with the Roman Empire some three hundred years previous.

The Germanic domination over most of the British Isles was to remain in force until the Norman conquest of 1066. The Viking raids and settlement changed very little in the customs of the British people as the Germanic culture and Viking Norse culture were very similar. The Danelaw saw the area which the Angles and Saxons first settled, give way to Viking settlements like Ipswich, Norwich, Grimsby and the Viking colonization of Jorvik ( York ) in the North of England.

The Vikings and the Germanic tribes were of common ancestry and customs, it was only a question of who held the greater military power and whoever did, would have the most influence of British affairs until 1066.

The invasion of the Normans and the battles they fought to quell rebellion to their rule established a new reality for the British Isles. The old Anglo-Scandinavian dynamic of rule was to end and the Normans would bring a new style of governance to the peoples who inhabited the region.

Much of the Germanic nobility and landowners were slaughtered in conflict with the Normans. Much of Britain now lay in the hands of the new Norman elite, huge amounts of estates were now under foriegn control and there was a disconnect between the rulers and the people.

Although Norman ideas were implemented among the elites and the mechanics of running the country, the Germanic culture still survived in the everyday people of the British Isles. Traditions and heritage were hard to supress, the language of the people was still Germanic and would remain so. The Normans built castles and churches, yet the people who manned the turrets and paid taxes to the nobles were mostly Anglo-Saxon to their bones.

Which tribal group changed Britain the most?

Other Related Hubs By This Author.