Thomas is a student of the past, who finished his undergraduate degree in History at the University of Leeds in 2017.

This is going to be the first in a set of hubs detailing the history of Germany between 1918-1945, pertaining to the rise and fall of Adolf Hitler and the Nazi Party. This is the area of history I find most fascinating. It is, as my history teacher says "magnificent in its horror", and is a period of history that everyone should know about and remember. To understand how the Nazi Party came to commit its horrendous crimes in the Second World War, we must first look at how the Nazi Party rose up from the disorder of the end of World War 1.

On November 11th 1918, Germany signed the armistice with the allies, effectively ending the costly and destructive war that had ended the lives of over 37 million people. However, Germany's problems were only beginning. In the later years of the war, Germany was struggling with widespread starvation due to a lack of food, and by the wars end 3/4 of a million had died from starvation. This was worsened by the fact that Germany had near enough bankrupted itself through the war effort, leading to an economic crisis which was to only get worse in the coming years.

The other major problem faced by Germany was that it still had 3,000,000 soldiers on the front when the war ended. These soldiers were told to simply pack up and go home, which confused and angered the soldiers. Many were young and had done nothing with their lives by fight and kill for their country. They were born and bred to kill, they knew no other skills. What did they have to go back to? An economically worn out country, missing or dead relatives and friends, and little to no job opportunities awaiting them. Knowing nothing but fighting, many of these soldiers turned to rebellion and social disorder, forming the right-wing group called the Freikorps, which committed many assaults and murders, and caused general chaos in post-war Germany.

1919, the Treaty of Versailles

The Treaty of Versailles is arguably one of the major causes of the disorder in post-war Germany, and henceforth a significant contributor to the rise of the Nazi Party and their subsequent crimes. The Treaty itself imposed numerous provisions on Germany, the main ones being:

The War Guilt Clause was despised by all of Germany, and helped to fuel the 'Stab-in-the-back' legend, the notion that Germany had been betrayed by Communists, Socialists, and Jews; the 'November Criminals' as they came to be known. This fueled rebellion and violence, particularly by the Freikorps, and strengthened nationalism. This surge of nationalistic ideals gave rise to numerous small, extremist 'parties' in Germany. The most notable of these groups was the German Worker's Party (Deutsche Arbeiterpartei), later to become the National Socialist German Worker's Party (Nationalsozialistische Deutsche Arbeiterpartei), more commonly called the Nazi Party.

The territorial losses and the war reparations were dire economical impositions on the country. Territories such as the Rhineland contained a lot of useful German industry, which was annexed by the Allies. A territorial loss that created great bitterness was the 'Polish Corridor'. This was a section of land that went through Germany to the coast that was given to Poland, and it cut East Prussia off from the rest of Germany. This territorial change was seen as evidence of the Allies' hypocrisy, in that they espoused the right of national self-determination but denied it to the Germans in the Polish Corridor.

The Hyperinflation crisis in 1923 begun with the French Occupation of the Ruhr. The French had adopted a policy of strict enforcement of the Versailles Treaty's terms in order to keep Germany permanently weakened. When Germany failed to meet a reparations payment, the French occupied the Ruhr.

As Germany was in no position to resist France militaristically, they decided to employ 'passive resistance'. This was where the government instructed the Ruhr's industrial workers to go on strike and refuse to work, which would bring the output of the Ruhr to a standstill and prevent France from taking its wealth. The government promised to compensate the workers for their lost wages. However, finances were in no good state before this, as the country was already in heavy debt following the end of the war, which was made worse by the imposed reparations by the Allies. This led to rampant inflation which was only made worse by the Ruhr situation, as no money was being produced from the Ruhr industry and the government were having to pay the workers involved in strikes.

To answer the inflation problem, the government resorted to printing off more money, which destroyed the value of the German mark and created the hyperinflation crisis. The prices of basic items like bread was in the millions, and rising by the hour. It was so high that people lost confidence in paper money and resorted to bartering, and piles upon piles of money were used for anything other than currency.

Following the war a number of different factions emerged that each caused terror and instability for the Weimar Republic. During the German Revolution of 1918-1919 Bavaria became a socialist republic, and underwent 4 different socialist and communist regimes until mid 1919 when the Weimar Republic employed the Freikorps to bring it down.

One that gained particular momentum was the Spartacists. Since the Russian Revolution, communism was rising in many countries, and Germany was no exception. The Spartacists were a communist group led by Rosa Luxembourg and Karl Liebknecht. The Spartacists attempted a coup d'etat in 1919 in Munich, and the uprising succeeded in taking much of Munich. Ultimately however, the coup failed. The socialist government, led by President Friedrich Ebert, managed to strike a deal with the Freikorps. The Friekorps disliked the socialist government as they believed they had responsibility for Germany's surrender in WW1, but hated the communists more, so the 2 groups joined forces to crush the Spartacist uprising. In their defeat, Luxembourg and Liebknecht were killed. The Spartacists eventually reformed as the Communist Party of Germany (Kommunistische Partei Deutschlands, KPD), and continued to cause some disorder through their paramilitary organisation, the Rotfront, which clashed often with the Freikorps.

Another minor coup d'etat was attempted in 1920 by a nationalist by the name of Wolfgang Kapp. In his coup attempt he was supported by Erich Ludendorff, a much revered and admired WW1 military commander. However, Kapp's coup was also unsuccessful due to a lack of military and public support. Both Kapp and Ludendorff were let off for the attempt however, and amusingly Ludendorff claimed he just happened to be there at the time, an excuse he used again when he assisted in Hitler's attempt coup in 1923.

Following the Kapp Putsch's failure, one of the conspirators, Hermann Ehrhardt, formed a death squad called Organisation Consul, turning to political assassination as a means of bringing down the republic. Organisation Consul was responsible for the murder of Foreign Minister Walter Rathenau in 1922, and in response the government initiated a crackdown on right-wing groups, which ultimately forced the death squad to disband.

The Beer Hall Putsch was the third and final coup in this period in 1923, and was perpetrated by Adolf Hitler and the Nazi Party, which had gained considerable support in Munich where it was based. Hitler and his comrades stormed some beer halls in Munich and attempted to overthrow the Weimar government. However, like the Spartacists and Kapp, this coup was also unsuccessful, also due to a lack of public and military support, and the coup was quickly suppressed by the army. Hitler was arrested and put on trial for the crime, and as what he did was treason, should have been executed. However, Hitler used the trial as a stage for him to go into a powerful tirade against the socialist government and to spread his political ideology. The judges, who were sympathetic towards Hitler, instead only gave him a 5 year prison sentence, which was later reduced to 9 months.

Thank you for taking the time to read this article, I hope it was interesting and informative. If you feel I got something wrong or missed something out, please let me know and I will be happy to correct any mistakes.

Some good books on Nazi history 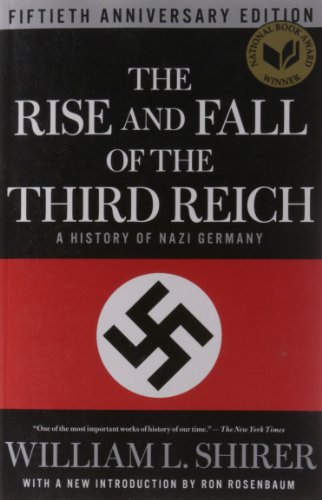