Secrets of the Slieve Mish

Located in the south westerly tip of Ireland, Kerry arguably boasts some of the world's most beautiful coastlines. Rugged mountains plunge their roots into the shining sea, with scenery largely unspoiled by modern life. It is here that you will find the Dingle Peninsula, and the Slieve Mish mountain range.

The region is a treasure trove of historical sites, dating from Ireland's very earliest Mesolithic finds at Ferriter's Cove (10,000 to 5,000 BC) to early Christian sites such as the Riasc Monastic Settlement (circa 500 AD).

On the northern side of the Slieve Mish, along the road from Annascaul to Tralee, the small valley of Gleann na nGealt is located at the end of a remote lane.

Not only do the physical remains leave their footprints on the landscape, so do the legends and stories of this area. One such tale will be explored in this article, the conclusion of which is truly remarkable.

The Legend of Mis and Dubh Ruis

The Slieve Mish take their name from a woman who is believed by some to be a princess of legend. Slieve is the Anglicised spelling of Sliabh which means "mountain"; usually one covered in heathland or with a plain across it. Mish is from Mis.

Daughter of Dáire Donn, Mis appears in the prose narrative of the Finn Cycle, in the Cath Finntrágha (The Battle of Ventry). Likely to date from the 15th Century, this manuscript records the daring tale of how Finn mac Cumaill and his Fianna defended Ireland from the forces of Dáire Donn, "The King of the Great World".

Dáire Donn would appear to be a powerful leader in the European main continent. Setting his sights on Ireland, he invaded, landing with his army at Ceann Trá (Ventry), near Dingle. A terrible and fierce battle ensued, and the Fianna were nearly defeated. It was only when the Tuatha Dé Danann arrived, that the battle turned. Finn mac Cumaill slew Dáire Donn, securing victory for the Irish warriors. The invading men fled, their hopes of securing new lands dashed.

Some tellings of this story describe how Mis witnessed her father being decapitated. Another, that she sought his body after the battle, and upon finding it, went mad with grief and started to drink his blood. She was transformed into a crazed being and fled deep into the mountains where she became a terrible creature. Her nails became claws, and she grew a pelt of fur (some say feathers). Taking to the wilds, she would attack and eat anything or anyone that she encountered. She had become a geilt; (from Old Irish) a "lunatic".

So dreadful was the reputation of this woman, that it was decided she must be stopped. The king of Munster, Feidhlime Mac Criomthane, ordered that she was to be captured. Men were sent or travelled on their own free will, but none returned, falling victim instead to her terrible claws and appetite for flesh.

Finally, the king's own harper, Dubh Ruis, volunteered. Armed only with his harp, his wits, and his silver tongue, Dubh Ruis travelled to the mountains where Mis roamed. His name means means "Dark Wood", or "Dark Knowledge", and knowledge he would need if he were ever to return alive. Wandering far into the mountains, he found the valley where it was believed Mis lived. Watercress grew in a clear spring, which was overhung with lush and deep vegetation. The brave soul took out his harp and began to play his sweetest tunes in order to lure the geilt from her hiding place.

After a while, he experienced the sense of being watched. Mis slowly approached, and for a moment, the harper wondered if she would tear him to pieces like the others. Instead, she edged closer and asked him about his songs. It seemed as if the sound soothed her and stayed her claws. Pausing from his playing, Dubh Ruis scattered a few pieces of gold and silver near his feet, which seemed to stir some memory in Mis's shattered mind. Mis sat and listened as he played his sweet music, and slowly changed from a tense wild animal to the vestige of a human.

As the sun began to sink in the western skies, Dubh Ruis lay down his harp and asked for some food. Mis growled and bounded into the valley. After a while she returned, bringing back a freshly killed deer. As she threw it down and began to tear into the meat, the harper instead suggested they eat it after it had been cooked. Mis thought this odd, but agreed. After Dubh Ruis had skinned and cooked the animal, Mis tentatively began to eat the venison, and slowly more memories returned as she chewed the meat. Memories of days feasting in her father's halls, decent food, a warm bed, and the laughter of friends returned to her mind, slowly pushing aside the madness and violence inside her.

Dubh Ruis heated some water from the spring over the fire, and poured Mis a hot bath in a hollow basin in the rocks. Tenderly he washed her filthy limbs, and combed her matted hair. She swiped with her claws each time he caught a knot, but it was clear that this luxury and kindness made an impact. The harper spent the night with Mis, and the two made love.

Now her mate, Mis would not be parted from Dubh Ruis. They spent another two months in the mountains together, and over this time Mis became completely cured. She returned to human form, and the harper returned to the king of Munster's halls with Mis as his bride.

The Cath Finntrága Or Battle of Ventry [By F. O'Casey] Ed. from Ms. Rawl. B 487, in the Bodleian Library by K. Meyer
Buy Now 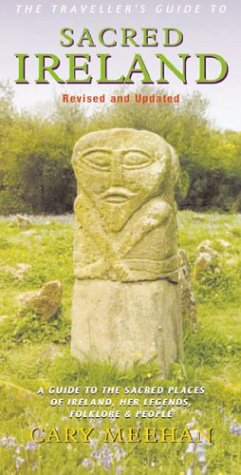 A Haven for the Mad?

It is not only the tale of Mis and Dubh Ruis that mentions lunacy.This small area is mentioned in a score of tales that feature madness.

Many stories were restored by contact with the Blasket Islanders, a small community of Gaelic speakers. Peig Sayers, a celebrated seanchaí (meaning "bearer of old lore", a type of traditional storyteller/historian) who lived in the Blasket Islands following her marriage, told Kenneth Jackson, a scholar from Cambridge, stories of the land in an attempt to teach him Gaelic. She spoke of Gleann na nGealt in a tale of a young woman who went mad after the loss of her lover. She and other troubled souls would flee to the isolated valley to live wild, as Mis had done in the mountains. They would live among the trees and drink the spring water.

Local folklore pinpoints the tale of Buile Suibhne ("Sweeny's Frenzy") to Gleann na nGealt, describing Suibhne as a king of Munster that lost his mind and took to wandering. It is more likely that this tale heralds from County Antrim in northern Ireland though, as recorded by J. G. O'Keeffe [1], with the valley of Sweeny's roaming being Gleann Bolcáin ("Valley of the Volcano").

Another tale mentions a King Bolcan of France, who was cured of madness after drinking the spring water of Gleann na nGealt, following his flight from the Battle of Ventry [2]. Could this be muddled with the legend of Mis, and the setting of Buile Suibhne? Folklore does tend to do this, jumbling tales through the generations like a game of Chinese whispers.

Brigid O Connor, who lives in the valley, recalls many tales of the mad that were told to her by her father, Tom Batt O Connor [2]. He described how people would instinctively come to the valley. There are tales of those of troubled mind that would come to drink the water and return home cured. Near a well in the valley is a stone known locally as the Mad Stone. It has a deep hollow in the centre of it. Quite possibly Bronze Age art or something for ritual use such as a Bullaun Stone [3], local folklore describes its use with the tale of how a local woman milked her cow onto the stone to provide for those coming in the night. A crossing over the stream is known as Ath na Gealtan, thought to mean "The Fools Crossing" [2].

Gleann na nGealt also appears in the tale of an unfortunate young man from Cahersiveen, who lost his mind and took to rambling in the valley after being held from joining the fairies of Cahergall stone fort in a game of football [4].

Another account tells of a man named Michael na Buile, otherwise called "Michael of the Madness", or "Mad Mick":

"Now, there is a beautiful valley in Kerry, some miles to the West of Tralee, and it is called ‘Gleann na nGealt’, or ‘Madmen's Glen’, and thither the crazy used to resort to drink its wholesome waters and to eat its cresses. So Mad Mick went to try the waters and the cresses, and to get rest for his poor head. One day a stray cow found her way into the glen, and her lowing might be heard for miles around, but though the glen was full of madmen no one spoke. But at the end of seven years, an old man more acute of hearing than the rest cries out, ‘Is that a cow I heard?’ Seven years after this a young man answering cries, ‘Where did you hear her?’ And now, at the end of another seven years, Mick, unable to stand the noisy conversation any longer, cried out, ‘The glen is bothered with ye!’ And then Mad Mick quitted Gleann na nGealt, bothered entirely with the noise and brawling of that same glen." [5]

To even the least observant among us, there seems to be a theme in this area. But why? 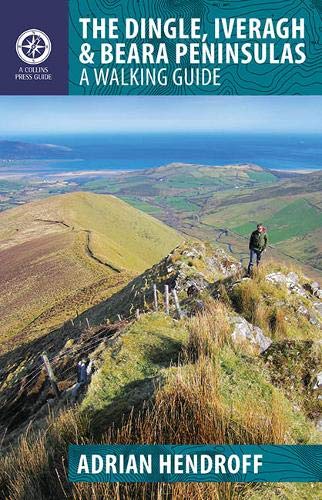 The Secret is in the Water

In July 2012, a team of scientists travelled to Gleann na nGealt to find out if they could find out why the valley had this reputation. Was there was anything behind these myths [6]?

Quite often, folklore is a way in which local knowledge of an event, or anything else of significance, is passed down through the generations. The curing powers of the waters had long been believed to ease madness, and the team visited the valley to analyse the facts to see if there was any basis on these stories.

The valley and subsequent study was filmed for the Irish television channel TG4's series "Cogar" and was televised in 2012. A local resident, Dr Paidri O Domhnaill and Tralee Scientist, Dr Henry Lyons, took samples of the water for analysis. The results were astonishing.

The springwater contained 55.6 ppb* of the chemical element, Lithium. This was a much higher content than recorded in other samples taken from other waters nearby. Lithium is used in the production of medicine to treat bi-polar disorder, and the salts have been used for schizoaffective disorder, and depression.

So it would seem that there is method in the madness of Gleann n nGealt. One has to only untangle the myths of an area to learn the secrets passed down through word of mouth. Science is finally proving the wisdom of folklore which recorded the qualities of this water for so long. 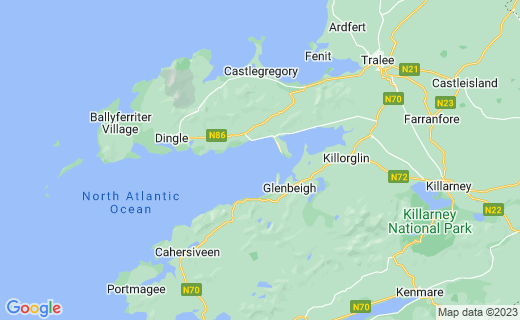 With thanks to Brigid O Connor