This is an excerpt from an article written by my father (James M. Clem) in the early 1960’s about Gold mining in Michigan’s Upper Peninsula. It was published in the Menominee Herald Leader. He was always interested in prospecting for gold and later in life he found small amounts of gold dry panning in the hills of New Mexico, where he retired.

In the 1800’s our nation had many famous gold rushes. The word “gold” sent so many people to California in 1848 that the area was admitted to statehood in just 2 years. Then scarcely a year later, we had the Colorado gold rush.

Following these was the rush to Nevada in 1859, primarily for silver, and then the rush to the Black Hills of South Dakota in 1875. Much later in 1897, all eyes were cast toward the Yukon and Alaska, and people migrated there by the thousands.

Many believe that the gold findings have been restricted to our Western states and Alaska. During the Yukon rush, however, a small town in Upper Michigan was quietly having a gold rush of its own. 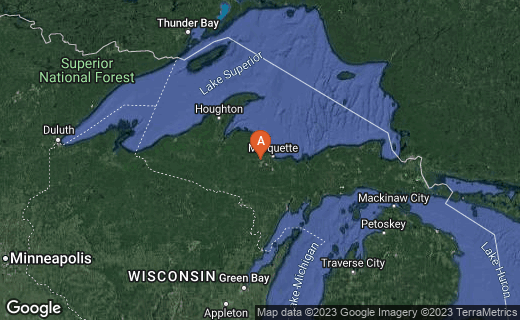 location of the Ropes Gold Mine

ISPEMING – Near Ishpeming a pocket of gold was found that assayed for over $44,000 gold per ton of ore. Gold was also found in the Huron and Yellow Dog rivers near the towns of Skanee and Birch. Much of this Upper Peninsula country has never been explored thoroughly for gold, although two men made statements(50 years apart) that gold could be placer mined by anyone over the entire region. I myself picked up sample of quartz containing gold flakes that would have assayed for hundreds of dollars per ton.

HOUGHTON – As early as the 1840’s Dr. Douglass Houghton, the first state geologist, made it known that near Ishpeming and at other locations, which he hinted at only, surface gold was present in large quantities. It was said the doctor camped somewhere between L’Anse and Marquette when he first discovered gold. He had gone there with and Indian friend and stayed for several days. Upon his return, he displayed nuggets and a crows quill filled with gold particles.

Later he changed the crows quill for an eagle quill and it was filled to capacity. Rumor has it the he found the gold in one of the many steams in the area. No one ever got the exact locations from him because he was always holding back reports until he finished his complete survey.

He was afraid his helpers would quit and prospect for gold on their own if he disclosed any information. Unfortunately Dr. Houghton was drowned at the mouth of the Eagle River in 1845, when his boat capsized during a storm, taking all of his notes with him.

In 1881, former druggist, postmaster, and school board member Julius Ropes discovered gold among the serpentine rocks north of the town of Ishpeming, which prompted him to form the Ropes Gold and Silver Company to exploit that discovery.

The mine changed hands numerous times without further production until the inflation of the 1970s drove up gold prices enough to prompt Callahan Mining Co. to purchase the property and invest in exploration and rehabilitation of the mine. Mining resumed in 1983 with the sinking of a truck decline to 900 feet depth, and a new shaft was sunk in 1984, with workings reaching 1548 feet depth. Ore rock was trucked to the ore dressing plant of the retired Humboldt Iron Mine for gold extraction. Operations continued despite the collapse of the uppermost levels into a huge stope in 1987. The hole was filled with sand and mining carried on until expensive repairs and falling gold prices prompted closure in 1991 of the only profitable gold mine in Michigan's history.

My memories and thoughts -

I remember exploring the old Ropes gold mine with my father in the 1960s. I can also remember finding traces of gold in pieces of quartz scattered about the site. We found small chunks of silver also. It makes me wonder if a recreational, hobby prospector could find more surface gold in the steams of the Upper Peninsula.