Could this island of bison be the answer to the US Space Program?

A privatized spaceport launch site operates at Narrow Cape, Alaska, just 44 miles south of Kodiak. The latitude is right for cutting American travel time to the International Space Station to around six hours - a feat already accomplished by the Russians from a similar latitude.

US Space Taxis Ready in a New Space Race

It became clear in 2013 - 2014 that a new type of Space Race was underway and gaining momentum in filling itself with heated arguments and accusations.

NASA and its many private company partners began designing and building replacements for the US Space Shuttle well before the final liftoff of the last shuttle in July 2011, but much of the public was unaware of those developments.

NASA chose five of the aerospace companies to design a new shuttle or "space taxi", from which America's space agency would choose three finalists.

The initial five companies were:

The three finalists, giving the USA three space taxi companies, in August 2014 were:

Three finalists competed for government contracts via NASA and all of the list above continue to develop their own commercial aerospace businesses. Texas is a particularly prime target for building factory and launch sites, especially for SpaceX.

In mid-September 2014, NASA leaders selected long-time space partner and contractor Boeing with its CST-100 Starliner space vehicle and SpaceX with it's Dragon2 spacecraft as winners of space taxi contracts to shuttle people from Earth to the ISS and back.

Interestingly, Elon Musk's SpaceX was using Russian-made rocket engines, but other NASA Commercial Crew companies developed engines to take the place of those purchased from Russia.

Commercial Crew partners Lockheed Martin and Boeing regularly manufacture the Atlas V rockets and engines used by Boeing as well as by most other aerospace contractors of the US Federal Government.

Blue Origin is another company working on such American made engines. (This engine development movement is one reason that engineering jobs are increasing in the USA, especially in Houston, Texas.)

By 2017, America was to be completely free of dependence on Russian technology in trips to the International Space Station. Thus, the USA replaced the retired Space Shuttle Program in about six years 2011 - 2017, although work began sometime before the July 2011 retirement.

Internet based companies are deeply into space travel. Amazon.com's Jeff Bezos opened a company called Blue Origin, which develops vehicles and rocket engines to replace those we secured from Russia - whose prime minister told us to use a trampoline instead of their Soyuz shuttles if we placed economic sanctions on the country for its involvement in warfare along the Black Sea in the early 2010s.

Google leaders formed the company Planetary Resources with James Cameron in order to mine near-Earth asteroids and place hundreds of time-share telescopes into the cosmos for the public and schools to use.

In September 2014, NASA selected long-time space partner and contractors Boeing with its CST-100 space vehicle and SpaceX with it's Dragon2 spacecraft as winners of space taxi contracts.

The Good of Space Exploration

A New Cold War and a New Solution

Immediately after the three chosen companies were announced to the public on August 24 (nasa.gov), an article posted August 25 illustrated the fact that some former space agency personnel were pointing accusing fingers at Russia and its shuttle. These persons stated that Russia would prevent the USA from continuing to populate the ISS with astronauts.

A few weeks previous in the summer of 2014, Japan and America announced a joint military project in space to clean up space debris. The program is certain to lead to dominance of this partnership in near-Earth space. While America continues to develop its military aerospace vehicles, Japan begins to build its own fleet of the same type of crafts. America is likely to begin using space taxis to the ISS soon, eliminating the need to use the Russian shuttles. This may be a matter of only months as of Autumn 2014.

The Russian space transports are more efficient than the US Space Shuttles in transporting people to the ISS, evidenced by the trip durations of six hours compared to 2.5 days.

One solution is that America launch its new space taxis from a latitude similar to that of Moscow's Star City and that is Alaska's spaceport on Kodiak Island.

The US Military has already been using the Alaskan Gulf launch site. I think that we cannot legitimately sit with three viable space taxi producers that have been designing and flying their spacecrafts since before the 2011 shuttle retirements and blame Russia for holding back American astronauts from traveling to the ISS.

Russia has been flying spacemen and women to the ISS in only six hours. If America is behind and are unhappy about it, then the combined US space agencies need to push ahead a priority to perfect their own space taxis. NASA has already chosen three private companies from the original five candidate firms interested in doing so. All three have space taxis.

NASA chose at least 63 different aerospace companies for the beginning of their Commercial Crew several years ago. Even Google was represented in the company Planetary Resources. That company raised more than enough money in one day to put a hundred or more space telescopes into the cosmos for teachers, students, and the public to use. Google successfully ran a contest for Lunar Lander design and production that yielded several workable units in 2013, two years before the contest deadline.

"If America wants astronauts in space, it should get a trampoline."

Three Companies Have Space Taxis and Others Are in Development

By August 2014, SpaceX had already furnished the Dragon and the Dragon v.2 Space Taxis for use in transporting spacemen and women of any and all nationalities to the International Space Station. Their televised initial lift off of supplies to the ISS in 2012 was as exciting as any Mercury, Apollo, or Space Shuttle launch. SpaceX regularly delivers supplies :up there."

Sierra Nevada designed, built, tested, and successful flew an updated model of the US Space Shuttle vehicle. Moreover, it can land like a jetliner the size of a 747 - perfect for 12 spaceports in America and one in Canada. Unfortunately, Sierra Nevada did not win a NASA contract for their vehicle.

Related to the mention of the 747, Boeing has developed a larger Apollo-category space capsule called the CST-100 that can accommodate seven space travelers instead of three.

This is all gratifying, but we need to cut down the length of transport into near-Earth space for efficiency and cost savings.

Star City to the ISS - 6 Hours 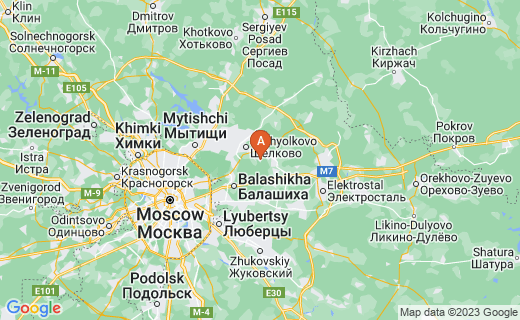 The Problem is Time and Rating

Some voices shout that the Kodiak Launch Site in Alaska is another example of pork barrel spending. However, being on a similar latitude with a Russian city that can deliver a space shuttle to the ISS in only six hours, then Kodiak takes on more importance.

The latitude at which a space agency launches a spacecraft impacts the time required to complete a journey to the ISS. This includes the usual considerations of angle of trajectory and window of opportunity. In addition and in oversimplified terms, a shorter ISS trip time may require less fuel than a longer trip time.

Can America and its Dragon v.2 spacecraft from SpaceX achieve a 6-hour trip? I think the answer is Yes, if the capsule is launched from Kodiak Island.

Thus far, only 16 launches have occurred at Kodiak Island between November 1998 and August 25, 2014. The Alaskan Space Port site can be put to more frequent use and if the US Space Agency does not use it, commercial companies will likely do so in the future.

The Kodiak Island site is not yet rated for manned launches, so gaining that rating is a priority of US government and commercial launches of manned missions are to occur. 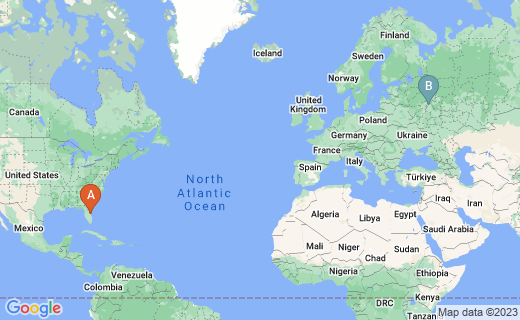 The high latitude location may shorten the trip to the ISS. 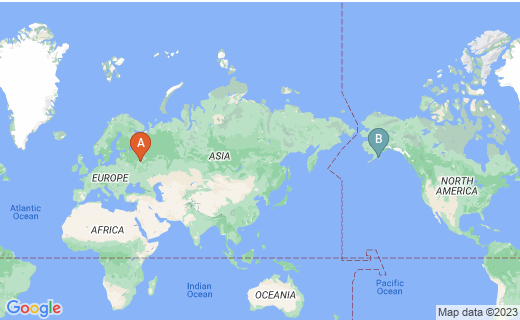 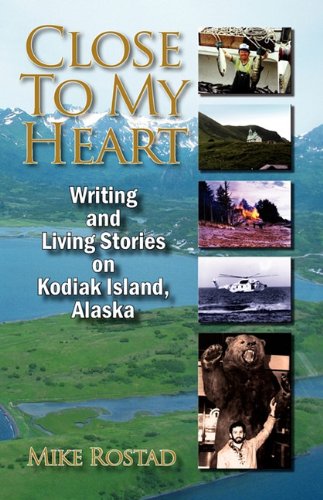 Close To My Heart Writing and Living Stories on Kodiak Island, Alaska
Stories of people who love and live on Kodiak Island. Author Michael Rostad shows us prehistoric sites, a cave that was home to Russian monk Herman, and tales from fishermen, military people, teachers, artists, doctors and many more.
Buy Now

AAC, a private company founded in 1991, maintains the Kodiak Launch Site (KLC) and Space Port. The site is the America's only high latitude full-service space port and provides hope for shortening the trip to the ISS, of the spaceport can achieve official rating/approval for manned missions.

Located on the Pacific Rim, the space port and facilities are constructed of materials that can withstand seismic events.

AAC hires qualified engineers, technicians, and interns to live and work in Kodiak and Anchorage. Submit resumes and cover letters to: careers@akaerospace.com.

An unexpected explosion of a military rocket occurred at the launch site early on 8/25/2014. However, the private company Lockheed Martin has already chosen the site for future launches of its Athena rockets.

Future development plans include a third launch pad and other facilities to be constructed.

Narrow Cape Lodge is available nearby on the north of the complex. The island is open all year to hikers and tourists, except for the launch areas during launch windows, and guided tours are available of the launch complex. 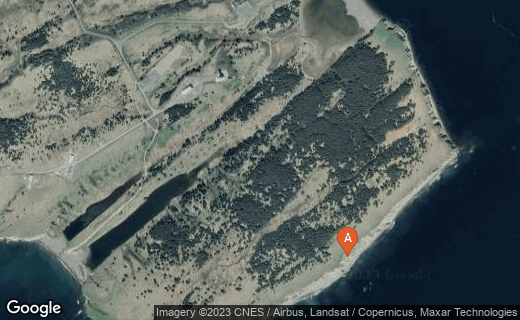 Location of the Kodiac Launch Complex (KLC), 44 miles south of the city.

The following historic sites are nearby the Kodial Launch Complex, including World War II facilities: