One of the great legends in Irish lore is the story of Grace O'Malley, a true Irish Pirate Queen. Her biography has been written by Anne Chambers, the leading authority today on Grace O'Malley. It is an interesting read that will thrill you with Grace's exploits on sea and land.

Grace was a fierce woman who suffered no fools. And, in later life she had a face to face meeting with Queen Elizabeth I, a meeting of two strong-willed women, and Grace held her own and came out of that meeting intact.

She was a tomboy, much to her mother's distress, who grew up into a beautiful woman, who became the most wealthy woman on the western coast of Ireland and who married twice and also took a lover fifteen years her junior.

Grace was a formidable woman who earned the loyalty of those men who followed her and owned not just castles and land but also approximately a thousand cattle and horses.

Her life story is the stuff of legends and Grace O'Malley was a legend in her own time, notorious as well as loved by her crew who served her loyally and unquestioningly. Grace was a swashbuckling woman who dared to live as she pleased at a time when men dominated the lives of women. This woman would not be tamed. 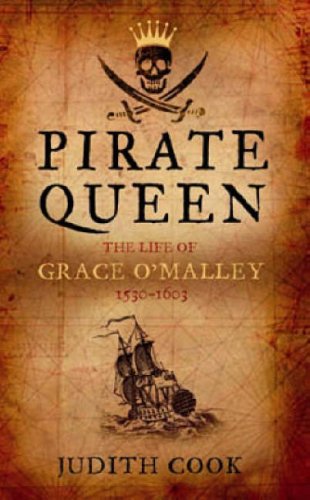 Grace was born in 1530 at the family's home in Clew Bay, County Mayo in Ireland and given the Irish name of Grainne Ni Mhaille, which is anglicized as Grace O'Malley. She was known by the nickname, Granuaile.

The O'Malley clan built a row of castles facing the sea to protect their territory and this territory remained in their clan even after Grace's death in 1603.

As part of their sea business, the O'Malley's taxed all those who fished off their coast which also included fisherman from as far away as England. The O'Malley's had no love of the English and did not recognize their authority. They were fiercely loyal Irish men and women and fiercely loyal to their O'Malley clan.

Grace grew up as the only girl in her family and even though her mother hoped for a young lady who would marry well and become a noblewoman who remained in the castle, that was not to be.

Grace, who was formally educated and spoke Latin fluently along with Gaelic, was a tomboy who dreamed of sailing with her father and working in the sea business. As a young girl she pestered her father to allow her to accompany him on his ships trading with Spain and France. Her father would have none of it and told Grace she could not accompany him on his ships because her long hair would get caught in the ship's ropes.

According to legend, Grace immediately cut off her hair and dressed in boy's pants and shirt and presented herself to her father and brothers. They roared with laughter and nicknamed Grace, Grainne Mhaol, Grace the Bald. Eventually her father gave in and permitted her to go along on his sea trips.

Grace loved her life at sea and took to it well. When the ship she traveled on was attacked she joined in fighting and defending the ship. When they overtook Spanish or French ships, they pirated them and took captives who surprisingly became loyal to the O'Malley clan.

When her father died, Grace inherited all his ships and trading business along with the Irish land from her mother.

The inspiration for this hub, by Jackie Lynnley

Grace in her prime

It is this western point in Connacht that was be base for Grace's shipping and trade activities. She successfully defended her lands in battle with the Irish and the English. She taxed ships that sailed through or by her coast and when they refused to pay the tax she and her crew would pirate and pillage the ships.

She also attacked and pirated ships as far away as Waterford, south central coast of Ireland, and closer to her home, northwestern coastal Ireland. Not only did she attack the ships, she also attacked fortresses and castles on the shoreline conquering them and adding them to her lands.

In 1546, Grace married Donal an Clogaidh O'Flaitheartaigh (O' Flaherty) who was heir to the O'Flaherty clan title. This was an advantageous marriage and Grace added the O'Flaherty lands to her holdings. They had three children: Owen, who was later killed as a young adult; Maeve or Margaret, and Murrough.

Together the O'Malley's and the the O'Flaherty's joined forces and ruled the western coast of Ireland. Sadly, Donal O' Flaherty was killed in battle but Grace was not without male comfort for long.

In 1566, Grace married a second time to Risdeard an Iarainn Bourke (Richard Burke or Iron Richard, as he was known). He owned Rockfleet Castle (Carraigahowley Castle) which Grace wanted to add to her land holdings.

It was strategically located near Newport, Country Mayo, and because of Burke's leadership position he would eventually be eligible for election as MacWilliam (the second most powerful office in Connacht)

Grace and Richard were married under Brehon law "for one year certain." They had one son, Tibbot. When the year came to and end, legend has it that Grace divorced Burke by saying "Richard Burke, I dismiss you." She said this out the window of the castle to Burke on the ground below, and because she was in possession of the castle, Grace was able to keep his castle and all his lands.

Despite this divorce story legend, Grace and Richard appear to have remained married in English documents produced from the period. By now Grace was quite wealthy by land and sea.

Divorced or not, it is said Grace took a lover, Hugh de Lacy, fifteen years her junior. When he was killed by the MacMahon clan, Grace sought revenge. She captured their ships and killed the MacMahon's responsible for de Lacy's death and took their castle and all their lands.

By 1593, Sir Richard Bingham, the English governor of Connacht, finally had enough of Grace and the O'Malley clan's 'business dealings on the sea' and took two of her sons and her half brother captive and stole part of her lands from her. Grace was furious and sailed for England to meet with Queen Elizabeth I at Greenwich Palace.

Grace wore a fine gown, but when meeting Elizabeth face to face she refused to bow to the Queen because Grace did not recognize Elizabeth as Queen of Ireland. By now, both women were in their sixties. Grace and Queen Elizabeth talked for quite a while and finally came to an agreement:

The captives, Grace's two sons and her half brother would be returned unharmed and Sir Richard Bingham would be removed from his position as governor in Ireland and return to England, and in return, Grace would stop supporting the Irish Lord's rebellions against the English throne.

It has always been a surprise to historians and biographers that Queen Elizabeth I did not imprison Grace O'Malley when she had the chance. That Elizabeth entered into an agreement with Grace was a surprise to Elizabeth's court officials and to historians today. It is believed that Elizabeth and Grace got on so well because both were very strong willed and formidable women and greatly respected one another. They were more alike than different.

Grace's other demands of the return of her lands and castle that Bingham had grabbbed were not returned to her, so Grace continued to support the Irish Lords in their rebellions against Elizabeth. Grace continued with her shipping, trading, and pirating business until her death.

It is believed Grace O'Malley died in 1603, the same year as Queen Elizabeth I, at Rockfleet Castle, but the year and place of Grace's death has been disputed over the years.

Although deceased more than four hundred years ago, Grace O'Malley has been immortalized in song and many have been written about her over the years.

Westport House was built in the 18th century by Colonel John Brown, a Jacobite, and his wife Maude Burke, Grace O'Malley's great-great granddaughter. It was built on the original grounds that Grace owned during her pirating days in Ireland.

Today, it contains an exhibition on the life of Grace O'Malley put together by Anne Chambers, her biographer and leading authority on Grace O'Malley. You can also walk the grounds and view the bronze statue of Grace included there.

The statue was sculpted by artist Michael Cooper.

Ye Loyal Krewe of Grace O'Malley, Tampa, FL. All women out there who like and admire Grace O'Malley can find their inner pirate by joining Grace's krewe in Tampa, Florida. This group was formed in 1992 by fourteen women, all active volunteers, in the Tampa community. They created an all female krewe as a social organization from the inspiration of Grace O'Malley as a strong, unstoppable woman.

Today they are 250 members strong and participate in more than seven parades throughout the year in the Tampa area. Members must be a Tampa community volunteer to join the krewe.

In 2007, they built their permanent float, pictured above, using Rockfleet Castle as their location on the float. The seahorse is their mascot.

The women are known as "Ladies of Grace" and dress in authentic 16th century grand court gowns that they wear for parades and special events. They have a grand ball each year as one of their special events to raise money for charity.

Their motto is "Fun, Friendship and Frivolity," but if you think all they do is play around as pirate Queens, that is not it at all. They volunteer many hours around the Tampa area and compile points for their volunteering and for raising funds for charity.

But, their main purpose is to show tribute to Grace O'Malley, a true Irish Pirate Queen and a formidable woman who ruled in her day!