At first Socrates followed his father's profession as a sculptor. Like most men at that time in Athens he also served in the army.

Later he turned to philosophy. Socrates did not open a school or give public lectures as some philosophers did. His mission was to correct people's ignorance. His method was to engage people in 'question and answer' sessions. He was the first to use a set of rules, or logic, to discuss imprtant matters.

He questions the way people thought and acted. While he did not write down his thoughts, beliefs and theories we know about his ideas and teaching methods from his pupil Plato. Plato wrote down Socrate's idea and published them.

Socrates upset some people in government and important positions in Athens. In 399 BC he was accused of corrupting young men by making them to ask awkward questions about the society in which they lived.

He was found guilty and condemned to death by drinking hemlock, which was a poison. 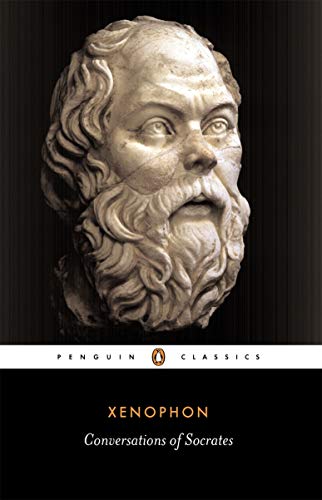 Socrates' parents were Sophroniscus and Phaenarete, Athenian citizens. Little is known about them. Plato gives evidence that Phaenarete was a midwife, but the common opinion that Sophroniscus was a sculptor or stonemason is based on the testimony of a late and untrustworthy writer. The family must have been fairly well off, since Socrates served as a hoplite, a heavy-armed soldier, in several Athenian campaigns, and as such had to provide his own equipment. He was married late in life to Xanthippe, who in later antiquity was proverbial for her bad temper, a trait ascribed to her by Xenophon. She bore him three sons. Plato describes him as having a flat nose and bulging eyes, which gave him a satyrlike appearance. This, together with his indifference to such externals as money—in later years he was extremely poor-fine food, and clothing, made him a challenging figure. He was famous for his robustness and capacity for self-denial, and he commanded respect by the simplicity and rectitude of his private life. He seems to have ventured outside Attica only once, to attend the Isthmian games, besides taking part in three military expeditions during the Peloponnesian War, to Potidaea, Amphipolis, and Delium. At Delium he distinguished himself for his courage.

Socrates had no special interest in political affairs, although, as his military record shows, he readily and honorably performed his civic duties. In 406 he was one of the presidents of the Boule, the executive council chosen by lot from among the mature male citizenry, when an illegal attempt was made to condemn en masse the generals who failed to pick up survivors after the naval victory at Arginusae. He alone insisted that the motion should not be put to a vote. During the short-lived oligarchy of the Thirty Tyrants (404-403) he again showed his strength of character by refusing to bring another citizen to them for execution as ordered.

Despite all this he was himself condemned, under the restored democracy, on charges of impiety. Plato gives the indictment in the Apology: "Socrates is guilty of corrupting the young and of not believing in the gods recognized by the city but other supernatural beings of his own invention". There was little substance to this charge. Under the amnesty of 403, wartime political offenses were not actionable, and it seems that the charge of impiety was chosen partly as a substitute for a political indictment that his accusers would have liked to bring. Socrates was held responsible for the actions of some of his associates and followers, among whom were perhaps three of the Thirty Tyrants, including especially Critias, the most murderous of them all, as well as Alcibiades, the brilliant but unprincipled general who for a time collaborated with the Spartans and the Persians against Athens. On the other hand, though there is no record of his having rejected the traditional gods, Socrates did claim supernatural guidance through a "divine sign", a kind of voice that he sometimes heard warning him against a course of action, and this was doubtless part of the basis for the charge.

More serious was his association with the Sophists, other leading figures of the intellectual awakening that took place in Greece in the 5th century B.C. The question of his relations with these itinerant professors, none of whom was an Athenian, is a very tangled one. Though he did not offer instruction for a fee, as they did, there is no doubt that he shared with the leading Sophists an emphasis on the value of thinking and arguing for oneself and that his teaching, like that or some Sophists, especially Protagoras, en­couraged argumentativeness and dialectical sub­tlety. Socrates, as the leading critical spirit in Athens, seems to have borne the brunt of the traditionalists' opposition to the new education, which was widely regarded as subversive.

At his trial, if Plato's account is reliable, Socrates steadfastly refused to admit any wrong­doing and defiantly insisted on continuing his past practices unless forced not to. He was unwilling to take any of the steps that might have won him acquittal or a light sentence because he regarded them as compromising. After being convicted, he could have, under the law, proposed a substitute for the death penalty demanded by the prosecutor Meletus. Instead he insisted on having a reward for the services he had rendered the Athenians in arguing with them and examining their opinions. He yielded in the end and accepted his friends' offer to pay a fine of 30 minas, about $1,000. After his condemnation to death he refused to escape jail as he might have done. He died in 399 B.C. by drinking hemlock in the presence of his nearest associates; oddly, Plato was absent. It is as if he insisted on confronting the Athenians as sharply as possible with the consequences of their unjust attack on him, hoping thereby to give them one final lesson in self-knowledge.

Socrates attracted to himself many of the brightest young men of the Athenian aristocracy, and many foreigners as well. His deep-seated attachment to the virtues of temperance, justice, and courage, his refusal to be dogmatic about them or about anything else, and his constant willingness to rethink and re-argue any question anyone might raise made him a powerful and inspiring figure. Not only Plato, much of whose philosophical activity was devoted to working out in systematic fashion the implications of Socrates' practice of his dialectical method, but many others were inspired by his teaching and example to give themselves up to philosophy.

Among the so-called minor Socratics were Euclid of Megara, who formed a school in that city, the Athenian Antisthenes, and Aristippus of Cyrene. The Megarians were acute dialecticians and theorists of logic, whose investigations contributed largely to the theories of necessity and possibility developed by Aristotle and after him by the Stoics. Antisthenes took over the ascetic side of Socratic ethics, carrying it to the extremes later characteristic of the Cynics, who regarded themselves as successors of Socrates through Antisthenes. Information about Aristippus is uncertain, but he may have taught a hedonistic ethics loosely derived from the So­cratic emphasis on the connection between virtue and human good.

Socrates has continued to be a figure of con­siderable fascination for philosophers, most often perhaps as providing confirmation for some of their own philosophical views and procedures. In the 19th century, Hegel saw in Socrates the first affirmation of his own view of the task of philosophy as the development of explicit and critical self-consciousness. Kierkegaard in The Concept of Irony found in Socrates' dialectical method both the practice of that "indirect communication" that was so characteristic of himself and the belief that "truth is subjectivity". Nietzsche, like Hegel, also regarded Socrates as a pivotal figure in world history. The formation of Nietzsche's complex and ambiguous attitude toward Socrates particularly in The Twilight of the Idols and The Birth of Tragedy, played a key role in the construction of his own philosophical ideas.

In the 20th century, Socrates has been claimed both by existentialists and by analysts of ordinary language as foreshadowing their own ideas. Socratic philosophy continues to be a rich and living heritage.