Heritage - 58: The Road to Nowhere - Dunwich, a Tale of Woe and Ground Lost to the Sea

The shore was washed away.

They say you hear the church bells still,

As they toll between the waves"

[From Al Stewart's song, "The Coldest Winter In Memory"]

Once a hub of Suffolk, Dunwich shares little of its past with those who go now as visitors...

Let's take a look into the past

For the last 800 years coastal erosion has claimed what was once a lively North Sea trading haven on the East Anglian coast. A few streets are there now, a few houses and a population can be counted in hundreds. Attractions are few in number aside from the noted Flora Tea Rooms venue that boasts a first-rate fish-and-chip shop.

Much of what has been succumbed to hammer-like waves - pictures show them in their destructive glory in the local museum. In a macabre way a thriving business has arisen from a lost heritage and calamitous misfortune. Twelve churches, a market square, guildhall and a rivermouth haven have been swallowed and obstructed by winter rollers. A stroll along the shingle yields artefacts, slicers of history that include human remains from a cemetery gradually losing to a watery fate for the town's past denizens.

This was a profitable haven with a population of around three thousand and a prominent place in King William I's AD 1086 Domesday survey.

...The vanishing coastline - a fate shared with much of Holderness in the East Riding of Yorkshire - puts paid to more each passing winter, of what remains of Greyfriars monastery are a haunting reminder of the Renaissance era of English history that took much of the fabric of Mediaeval England. There is a feeling of loss in the village that once boasted a lion's share of England's wool traffic. What is left will be no longer well before the next century dawns.

Dunwich as it is can be found on the coast between Southwold and Leiston.

From the 15th Century Dunwich had been known as 'Dommoc'...

...Seat of the East Aengle (East Anglian) bishops of a kingdom converted early in the 7th Century

... in the reign of King Raedwald and established for Saint Felix by King Sigeberht around AD 629. 'Dommoc' was the bishop's seat until around AD 870 when the kingdom was overrun briefly by the pagan Danes under Guthrum, their self-styled King of East Anglia after the death of the Anglian king Eadmund. The region became part of the Danelaw by agreement between Guthrum and Aelfred, king of the West Saxons

'Domesday' shows 'Dommoc' as owning three churches, with a population of around 3,000. Most of the buildings known in the 13th Century have gone, with all eight churches - five added between Domesday in AD 1086 and the winter storm of AD 1286. The nearby village of Newton was also claimed by a flood of AD 1328. Nineteen years later a further storm sucked around four hundred dwellings into the surging sea. On 16th January, 1362 much of what was left of Dunwich was wrecked by a further winter storm.

"The Lost City of Dunwich"

War, invasion and pestilence usually take their toll of mankind's achievements. Howling winter gales, surging seas and the movement of geological features doesn't often receive historical credit. Such was the fate of a large town - by mediaeval standards at least -.on the Suffolk coast. A few ruins stand, but apparently not for much longer, as testimony to past achievements. This was Dunwich, a haven for ships that plied the North Sea with the product Mediaeval England's economy thrived on: wool. A shadow of its antecedent, Dunwich is now merely a village of a few hundred souls, and one fairly new church built to replace eight taken by Mother Nature..

Nicholas Comfort takes you through the town's dark, stark, storm-ridden past

13th Century visitors would be lost, looking for familiar landmarks, never realising the low clifftop ruins were the priory, or their river had moved...

A sheltered haven grew up where the River Dunwich entered the North Sea...

Coastal erosion and storms brought about a shift in the river's course to exit into the sea at Walberswick, around three miles north of Dunwich at the mouth of the River Blyth. Dunwich was therefore slowly abandoned and its breakwaters breached due to lack of adequate maintenance. Erosion brought further woes.

The Parliamentary constituency of Dunwich kept the right to send two members to Parliament until changes of the 1832 Reform Act and Dunwich proved to be one of the well-known 'Rotten Boroughs'. By the mid-19th Century the town with its populace of 237 had become a decayed and disenfranchised backwater.

A new church, St James, was constructed in 1832 after All Saints, the last of the earlier churches was abandoned, without a rector since 1755. All Saints collapsed into the sea early in the 20th Century.,the last vestiges disappeared in mid-November, 1919.

Historian Stuart Bacon let it be known in 2005 that signs revealed during recent low tides that some shipbuilding had taken place on what had been the riverbank.

Where's Dunwich? The county of Suffolk lies 100 miles (160 kms), north-east of London, its coast stretches from near Felixstowe to just north of Lowestoft 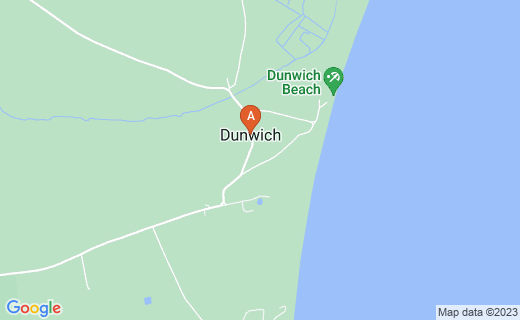 Now a coastal village threatened by erosion and winter storms; once an East Anglian hub with some shipbuilding and a stake in the Mediaeval wool trade