The Harappan Civilization in the Great Indus River Valley

Cultures in the Indus River Valley

Cultures started popping up in the Indus River Valley, in the northwest Indian subcontinent which is known as northeast Afghanistan, Pakistan, and northwest India today, about 7500 BCE. These Neolithic cultures gave rise to the Harappa civilizations from 3300-1300 BCE. This civilization had more than 5 million civilians at its peak and covered 1.3 million square kilometers of 502,000 square miles. It was named after Harappa, the first site of the civilization to be excavated. Harappa was one of the civilization’s two chief cities and was home to about 40,000 people. The other chief city was Mohenjo-Daro, which was just slightly larger than Harappa and home to 35,000-40,000 people.

The Two Main Cities of the Harappan Civilization: Harappa and Mohenjo-daro 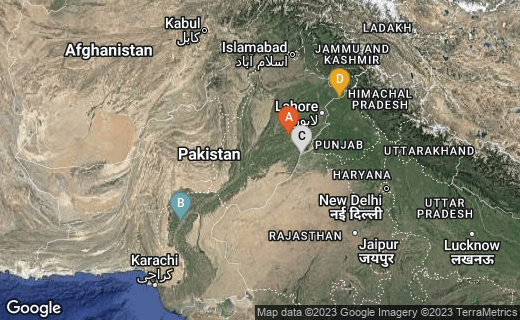 This is the location of Harappa.

This is the location of Mohenjo-daro.

This is the location of the Ravi River, after which the early era of the Harappan Civilization was named.

The early Harappan Ravi phase, named after the Ravi River, was from 3300 BCE to 2800 BCE. During this time, farmers had learned to grow peas, sesame seeds, dates and cotton as well as domesticate water buffalo, cattle, sheep and goats. They are the first known civilization to domesticate and raise chickens.

They turned to building urbanized cities by 2600 BCE. More than 1,052 settlements have been found in this area. Most of them are located near rivers and their tributaries, which makes sense as they would have needed the river water for irrigating their crops. The Indus River frequently over-flowed and deposited fertile, rich silt, similarly to the Nile. Unfortunately, unlike the Nile, the Indus River was hard to predict. It frequently carved new paths to the sea and could be devastating to harvests when it did. Today it is controlled by a series of dams. They planted wheat and barley in September and harvested the following spring.

The Mature Harappan society is known for its attention to sanitation and hygiene. The sewage and drainage systems were much more advanced than those systems belonging to other civilizations of the time. Groups of several families received water from a single well. In the room that was dedicated to bathing, waste water was direct to covered drains which lined the major streets.

While several granaries and a public bath, which may have been used for religious rituals, have been found, no large monumental structures have been found. This is unusual for the civilizations of the time. It is known that they worshiped several gods and goddesses which were associated with creation and procreation. They honored a horned fertility god and a mother goddess. They also held animals sacred because of their association with vital, life-giving forces.

Granaries kept in walled citadels in both Harappa and Mohenjo-Daro, suggest that grain was taxed and stored there. Their roads were built on a strict North/South and East/West grid system. Little to no information is known about their political system.

These people were impressively accurate in measuring length, mass and time and were the first to develop a system of uniform weights and measures. The Harrapan society is known for its innovation in metallurgy and its creation of sculptures, seals, and terracotta and bronze figurines. These figurines suggest that many of the girls were involved in some form of dance, although its meaning and significance are not understood. Many figurines of animals have also been found.

Some distinct Indus symbols have been found on seals and ceramic pots and tablets. Between 400 and 600 symbols have been identified. Inscriptions usually are no longer than four or five characters long. For this reason, the Indus society has typically been categorized as a literate society, but this theory has been drawn into question. Some argue that these symbols were not alphabetic or linguistic, but merely pictographic.