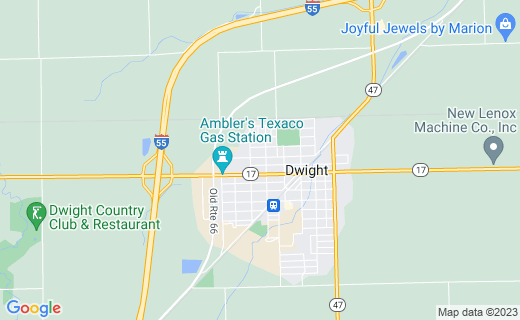 The tiny town of Dwight, Illinois—with a population 4,460 in the 2010 Census, comprising only 3.2 square miles—has a number of impressive distinctions for architecture enthusiasts. The little hamlet in Northeast Central Illinois has two prominent buildings by architectural luminaries just across the street from each other in the town center. And its location on one of the rare, nearly intact portions of historic Route 66 makes it a fascinating pit stop off Interstate 55 for people traveling between Chicago and St. Louis.

Dwight was founded in January 1854 by three land speculators working for the Chicago and Mississippi Railroad-- Richard Price Morgan, Jr., James C. Spencer, and John Lathrop. Together with the Fell brothers—Jesse and Kersey, who had experience establishing Central Illinois communities in Clinton, Normal, Towanda, and Pontiac—the five planned out the town to take advantage of its location on the small railroad, which later became the prominent Chicago and Alton Railroad. By 1859, the town had a grain warehouse, grain elevator, and a large stone mill, which made it a center for surrounding agricultural commerce.

In 1869, the growing Chicago and Alton Railroad was double-tracked for seven miles in either direction from the town, and tracks were constructed linking Dwight with the town of Streator, Illinois, 23 miles due west. The growing railroad prominence of the town made it necessary to construct a railroad station of sufficient stature to service area commerce and transportation needs.

In 1891, the Town of Dwight commissioned noted Chicago architect Henry Ives Cobb to design its railroad station on the Chicago and Alton Railroad. During the 1880s, Cobb had distinguished himself with notable, substantial buildings in the Richardson Romanesque style, including the Union Club of Chicago (1881), the Potter Palmer mansion on Chicago’s Lake Shore Drive (1885), and Tippecanoe Place in South Bend, Indiana (1889).

Cobb’s design for the Dwight station featured a two-story Romanesque design in substantial stone construction, surrounded by an ample covered outdoor perimeter under a hipped roof. The design expanded on his earlier themes and foreshadowed his work on other notable buildings: the exquisite Newberry Library in Chicago (1893), St. Louis’ Olive Building (1896), and the former Chicago Historical Society Building (1896).

The Dwight station, located at 119 W. Main Street, still serves Amtrak passengers today, although the interior of the building is used for the Dwight Historical Society. The building was listed on the National Register of Historic Places on December 27, 1982.

Directly across the street from the Dwight railroad station at 122 West Main Street is one of only three bank buildings ever designed by Frank Lloyd Wright, the Frank L. Smith Bank (now known as First National Bank of Dwight), largely designed in 1904-- commissioned and modified to specifications in 1905, and opened in 1906.

As with many Wright buildings, the exterior design—largely eschewing the kind of excessive ornamentation common in the early part of the 20th Century—was so far ahead of its time stylistically that one might not know that the building was designed in 1904, not 1954. The sturdy limestone exterior and horizontal orientation across 60-foot façade features cut stone and minimal ornamentation in stark contrast to Classical designs common to bank buildings before the advent of the FDIC. The building’s interior features a fireplace, skylight, and Wright-designed furniture.

Less than a mile due west of the Wright and Cobb buildings in Downtown Dwight is the fully restored Ambler’s Texaco Station at 600 W. Waupansie St. (at the intersection of Old Route 66 and Illinois Route 17). The 1933 filling station was in continuous service until 1999, and fully restored in 2005 to reflect Route 66 road culture and iconography of the 1940s.

Located only ¼ mile east of Exit 217 on Interstate 55, the station is a rare example of the "house and canopy" or “domestic style” of roadside service stations developed by Standard Oil company in 1916. Now owned and operated by the Village of Dwight, the station serves as a visitor’s center with a potbelly stove, antique advertising display, an old cash register, and artifacts from roadside culture of the 1940s.

Downtown Dwight is laid out in a style common to small towns in Central Illinois, in which the town center is oriented around the railroad depot and diagonally-oriented train tracks, with a town common surrounding the station. Similar orientations exist in nearby Gridley, Chatsworth, Odell, Towanda, and McLean—although none of those other small towns have passenger railroad service today. The downtown Dwight business district still features a healthy mix of offices, retail and entertainment facilities.

The Keeley Institute was once a commercial treatment center for alcoholics that operated from 1879 to 1965. At its peak, the Institute had more than 200 branches in the United States and Europe. The former Keeley Office Building, housing the Institute’s administrative offices is located at 128 West Main Street, next door to the First National Bank of Dwight. The office building is now the W.W. Fox Developmental Center, run by the state of Illinois.

The John R. Oughton House is a beautifully-restored 19th Century Victorian mansion located at 101 W. South Street. It served for many years as a lodging house for Keeley Institute patients . It was listed on the National Register of Historic Places on September 23, 1980.

The Pioneer Gothic Church is yet another Dwight architectural gem on the National Register of Historic Places. Built in Carpenter Gothic style, the 1857 wooden church was founded as a Presbyterian congregation and was once visited by the Prince of Wales—son of Queen Victoria and heir to the throne-- on an 1860 hunting expedition through Central Illinois.

The Dwight Correctional Center at 23813 E. 3200 North Road is a maximum security prison for women, opened on November 24, 1930 as the Oakdale Reformatory for Women. Prior to Illinois’ abolition of the death penalty in 2011, it was the site of the state’s death row for women inmates.