Maren has been a caregiver to a family member with leukemia.

It was a big deal for the residents of the colonies to make their own iron instead of relying on imports from their soon-to-be-enemy, Great Britain. Two historic sites close to each other preserve different eras of these endeavors.

An iron furnace in the 1700's colonial America was really an iron plantation. All the ancillary materials, supplies, and fuel for iron smelting were mined, gathered, or manufactured within the lands of the furnace owner. Furthermore, secondary industries needed to support the lives of the workers, such as provision of homes, farms and a company store, grew under the aegis of the furnace owner. This was because iron-making was isolated in woodlands, far away from villages, stores, or food. If the rest of the world dropped into the sea, the iron plantation could survive as it was a self-contained, self-sufficient community.

The goal is to get useable iron. Since, I have a thick noggin for understanding physics, I am explaining the process is extremely simple terms.

How did the colonists accomplish this?

When you put together:

Amazing things happen: both those kinds of rocks melt.

A. The iron makers used the fuel charcoal, which can burns at temperatures up to 4700 degrees F (2600 degrees C.) The melting point of iron is around 2200 degrees F (1200 degrees C.) Due to the porous nature of charcoal, it is sensitive to the flow of air and the temperature of the fire can be adjusted by blowing air into the fire. So, iron makers blew air onto the fire through a gutter-like pipe. This blowing was called a “blast.” Since the iron furnace workers blasted regular air [not pre-heated air], this way was called “cold blast.”

Q. Where was this fire occurring? How did it stand up to such a hot fire and melted rock inside it?

A. The fire was made in a tight, tall place with many layers of fireproof brick. It looked a little like the brick chimneys we sometimes see at the side of a 2- or 3-storied house. The brick would eventually get a little crumbly and worn away, so every about every 6 months the workers had to stop the fires, let the chimney cool down, and then put new bricks inside it. Even though it was a tall chimney, the name the iron workers called this place was the Furnace.

THERE IS MUCH MORE TO THE STORY AND I HOPE YOU WILL VISIT ONE OF THE SITES TO LEARN THE BIGGER STORY. 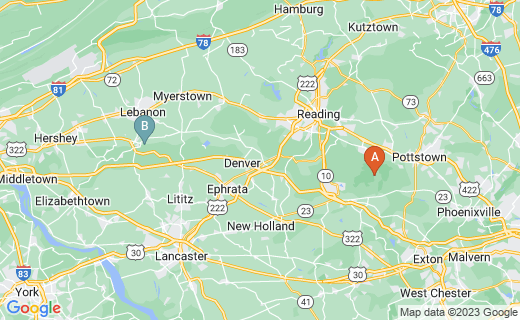 A national historic site of an American iron plantation in Berks County, Pennsylvania.

A state historic site in Lebanon County, PA for an iron plantation.

Although its official address is 2 Mark Bird Lane, Elverson, PA, Hopewell is actually much closer to the borough of Birdsboro, PA, aptly named for the founder of the iron plantation, Mark Bird. The historic site is run by the National park Service yet sits adjacent to a large state wooded park. This gives it the advantage of an authentic setting. Iron plantation workers needed to fell an acre of trees per day. Thus, most of the employees were wood cutters.

The Hopewell site fell into grave disrepair after its closing in 1883. This site is a work of extensive restoration and recreation of the village. It contains a farm with horses, sheep, and other animals; a company store, kitchen garden, summer bake oven, charcoal makers' huts, employee homes, the iron masters capacious house, and the blast furnace with water wheel.

The technology used at Hopewell always relied on a water wheel to power the air blasts. Hopewell had one cold blast air pipe.

The site was recreated in the 1930s and 1940s under the federal Works Progress Administration and Civilian Conservation Corps programs. The buildings reflect the time period of the early to mid 1800's. Due to the abandonment of the land and the great amount of space available, Hopewell provides a more holistic feel for the entire community supporting the iron plantation than does Cornwall (although Cornwall has its own advantages.) Hopewell holds many events and re-enactments.

Although the British government tried to severely limit the colonial iron industry, in the mid-1700's the colonies contributed significantly to the world's iron supply. Moreover, Pennsylvania was the top smelter among the colonies.

The owners of both Cornwall and Hopewell were committed to the cause of independence and made cannon, shell, shot and other ordnance for George Washington's forces. This was a risky decision for many reasons, including the possibility of British destruction of the plantation and lack of payment for the goods after the war was won. This lack of payment from the new, but bankrupt, American government did indeed cause financial ruin for Mark Bird.

Cornwall iron Furnace is the only intact iron furnace in the western hemisphere. It is a National Historic Landmark administered by the Pennsylvania Historical and Museum Commission. The buildings of the plantation were continually maintained and many were sold when the furnace closed in 1883. Thus, the ironmaster's house, the pay building, and other structures are now privately owned and visible only from the outside. However, the ironmaster's house is open a few times a year on the first floor.

This historic site reflects the grand buildings erected by the Coleman family when it owned and operated the plantation. The solid brownstone buildings and leaded glass windows were signs of the operation's success.

For a time, Cornwall kept pace with technological changes in iron smelting. It increased its number of blast pipes from one to three. Furthermore, it upgraded from using a water wheel to using steam to power the bellows.

Changes in Iron-making Technology in the 1800's

The Shutdown of Both Furnaces

After the American Civil War, railroads were the kings of transportation. The demand from railroads was for huge quantities of iron and steel. Furnaces like Hopewell and Cornwall were very small and could not compete with new furnaces being built as huge operations adjacent to railroad tracks. Hopewell Plantation had tried to convert to using anthracite coal, but this experiment failed. The Coleman family owned other iron furnaces which used anthracite coal as fuel and proved more profitable than the Cornwall Plantation.

Both operations closed in 1883.

Both sites are fascinating and provide a detailed,rich picture of industrial life in nineteenth century central Pennsylvania. Each is interesting and worth visiting.