It’s been quite a few years since we had made the trips along the Mississippi River in Illinois. At the time I worked in Rock Island, Illinois at the Rock Island Arsenal. I commuted from a small town named viola about 25 miles south of where I worked. Sometimes, for a scenic ride we would drive to the town of New Boston, IL which was on the riverside. From there we would follow the river and sometimes cross over to Burlington, Iowa. The trip to Burlington and back made a nice day trip. There were no other bridges but there were a number of interesting towns and the river bluffs were impressive.

On one such trip we followed the river road and came to the town of Oquawka. We passed a wharf that had restaurant advertising catfish dinners. I thought it would be a nice place to stop and eat one day. Driving up from the river we passed a town square with a small monument and something about an elephant. That elephant is sort of the town’s claim to fame, although there are some other attractions.

The elephant, Norma Jean According to the website “Find A Grave” the elephant Norma Jean was born August 10, 1942 and died July 17, 1972 in Oquawka, Henderson County, Illinois. She was the main attraction for the Clark and Walters Circus. Roadside America.com reports Norma Jean as a 6,500 pound elephant and the star of the circus. Her life ended when she was struck by a bolt of lightning and her trainer was knocked 30 feet by the lightening. Since Norma Jean was the star of the circus, it went out of business within a year.

The elephant was buried where she died, according to a Roadside America Report. Weighing over 6,000 lbs., it would have been difficult to move her. The town was willing to leave it go at that, but a local pharmacist by the name of Wade Meloan raised enough money to give Norma Jean a monument and the town allowed it to be placed in the town square.

The town now has a celebration each August in honor of the Elephant killed by lightning.

Another landmark of Oquawka is the covered Bridge referred to as the Wagon Bridge. It is about 2 ½ miles south of the town in Henderson County. It replaced a bridge called the Eames Bridge. It is made of wood and was built in 1866. Until 1935 it was part of the road over Henderson Creek. It became a footbridge when the road was moved by the state. February 24, 1975 it was added to the National Register of Historic Places. (Wikipedia)

“The first settlements were made about 1827-28 at Yellow Banks, now Oquawka,” according to e-referencedesk.com. The Blackhawk war stopped much of the immigration to the area. It started again after the war and the removal of Indians from the area. In 1841. 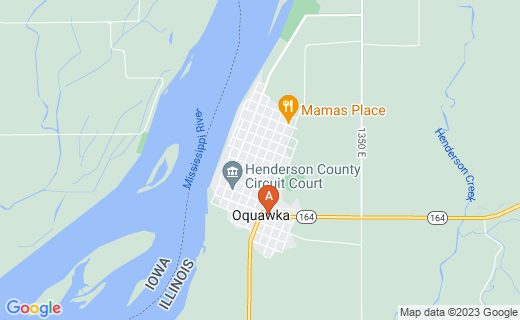