The Amazing History of Edinburgh, Scotland

I love traveling. In Europe, I enjoy historic cities and nature walks. I've visited Scotland, Ireland, and France, among other countries.

One of the many reasons to visit Edinburgh is the city’s history. As you walk around the city, it’s easy to see traces of its past from hundreds of years ago. The impressive Edinburgh Castle looks over the city, and centuries-old buildings are scattered around the shops, hotels, and restaurants.

You can learn about this history at some of the city’s museums and through intriguing guided tours, or you can visit Edinburgh’s historic sites on your own. If you want to learn more about Edinburgh’s history before you visit, or if you’re just curious, you’ll find an outline of Edinburgh’s past in this article.

The Earliest Settlements at Edinburgh

Although it’s impossible to determine exactly when the first humans settled in Edinburgh, we know that there have been people in the area for thousands of years. The earliest datable settlement archaeologists have found is a campsite located in Cramond, on the north-west edge of Edinburgh, dating back to approximately 8500 BC. That’s over 10,000 years ago!

There were a number of other settlements found around Edinburgh between 3200 and 1 BC. These settlements were primarily located on the hills around Edinburgh, the most prominent of which are Arthur’s Seat and Castle Rock (where Edinburgh Castle would eventually be built). These hills, which overlook the landscape for miles around, offered a great strategic advantage and are one significant reason why Edinburgh became such an important city.

During the Middle Ages, Edinburgh gradually became one of Scotland’s most significant cities, largely due to the presence of Edinburgh Castle. In the 7th century, Edinburgh was made part of Northumbria, one of 7 Anglo-Saxon kingdoms, which included most of present-day south-eastern Scotland and northern England. It is around this time that Edinburgh got its name as Eiden’s burh (burh being the Old English word for fortification).

It is uncertain exactly when Edinburgh Castle’s predecessor was built, but some kind of stronghold was likely built there in the 7th century. In the middle of the 10th century, the Kingdom of Scotland took over the northern portion of Northumbria, including Edinburgh. From that point on, Edinburgh was consistently Scottish.

Edinburgh gained prominence as a royal city in the 11th century. Malcolm III, king of Scotland from 1058 to 1093, frequently resided at Edinburgh Castle, and his son built the famous St Margaret’s Chapel, which still exists today, in the queen’s honor. Around 1130, King David I (the son of Malcolm III), made Edinburgh one of Scotland’s royal burghs. By this point the city had a stone keep at the site of Edinburgh Castle and the impressive Abbey of Holyrood, founded in 1128. Edinburgh became one of the Scottish royal family’s most important residences, and the city was often the focal point of conflict between the English and the Scottish.

During the Wars of Scottish Independence (1291-1314 and 1333-1341), the English invaded and held Edinburgh for a number of years. The war between the English and the Scottish caused some damage; St Giles Kirk was burned down in 1385, and Edinburgh Castle fell largely into disrepair. However, during the 14th and 15thcenturies, Edinburgh continued to grow in both size and importance.

Edinburgh also grew as an economic center during this time. The city was well known for its cloth production. Leith, on the outskirts of Edinburgh, became one of Scotland’s most important ports. This meant that a lot of trade, particularly in hides and wool, went through Edinburgh. This trade and the royal court drew a large number of nobility, craftsmen, and merchants to the city. 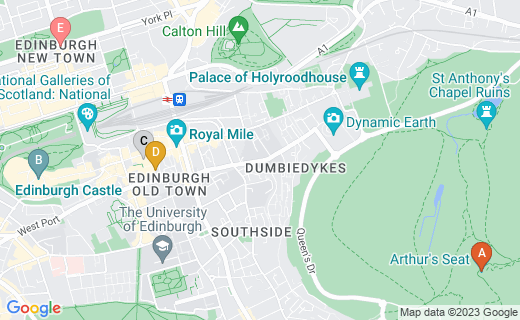 Edinburgh played a prominent role in the conflicts of the Reformation in England and Scotland. Mary, Queen of Scots, the Catholic queen of Scotland, resided in Holyrood Palace in Edinburgh before she was forced to abdicate the throne and imprisoned. The following civil war culminated in 1573 with the Lang Siege, in which Mary’s supporters held Edinburgh against her opponents. As many of Mary’s supporters surrendered, those in Edinburgh Castle continued to resist. After a siege of more than 5 months, a force of English troops with canons forced the defenders to surrender.

While the Catholic Mary had many supporters in Edinburgh, the city also had a strong Protestant faction. John Knox, a famous leader of the Protestant Reformation, was named the minister of St Giles’ Cathedral in Edinburgh in 1559. There, he preached emphatically in favor of Protestantism and staunchly criticized Mary, Queen of Scots, going so far as to demand her execution. In 1689 the Church of Scotland was made officially Presbyterian.

Edinburgh continued to play a prominent role in Scottish history as the Scottish capital. In 1603, Mary’s son James VI became king of England, uniting the Scottish and English monarchies. During this time, the Parliament of Scotland governed from Edinburgh. Later, in 1650, Oliver Cromwell occupied Edinburgh to subdue support for his opponent, Charles Stuart. In 1707 the Acts of Union joined Scotland and England together into the Kingdom of Great Britain. Scotland, therefore, had no independent parliament, and Scottish representatives moved from Edinburgh to the Parliament of Great Britain in London.

By the mid-18th century, Edinburgh had grown exponentially. The success of local had caused the population to expand and the economy to continue growing, and Edinburgh was becoming densely populated. To alleviate this problem, the Lord Provost of Edinburgh began a plan to build a new town to the north. This became Edinburgh’s New Town, with wider streets and more space than the Old Town. Edinburgh also grew as an intellectual center in the 18th century. Students came from both inside and outside of Scotland to study medicine, history, philosophy, and more. In 1783, the Royal Society of Edinburgh was founded to cultivate the study of science, literature, and history. Intellectual life became a key part of the culture of Edinburgh, with students and key thinkers of the time meeting in academic clubs.

Edinburgh in the 19th and 20th Centuries

In the 19th century, other Scottish cities such as Glasgow quickly industrialized as they became centers of manufacturing. Edinburgh, on the other hand, remained more focused on its traditional industries of brewing and printing. This resulted in Edinburgh’s growth slowing down, and within the first half of the 19th century, Glasgow outpaced Edinburgh to become the largest city in Scotland.

Edinburgh’s New Town became increasingly commercial and upper-class, while the Old Town fell into disrepair and gained a reputation for poverty and violence. Beginning in the late 19th century, the city worked to repair the Old Town and eliminate slums while maintaining the area’s historic character.

In the first half of the 19th century, Edinburgh fell into a period of economic decline. The city’s population shrunk, and some historic neighborhoods all but disappeared. In the 1960s and 70s, the city began another program to get rid of slums and restore the city to more modern standards. Edinburgh’s insurance, banking, and brewing industries grew, brining some prosperity back into the city.

Edinburgh gradually improved in appearance and infrastructure, with a growing number of museums and public amenities. In 1947, the city held the first Edinburgh Festival. By the 1990s, the city had developed a thriving financial district, with financial services making up a large portion of Edinburgh’s commercial activities. Today, Edinburgh is a thriving city and a popular tourist destination.