History of Gondolas Including Its Inclusion in Venetian Art 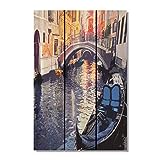 Gondolas remain one of the most recognizable boats in the world. They have been around since the 1100s. These early Venetian vessels look nothing like they do today.Scaulas, as they were called back then, were wider and had as many as 18 oars. What remained were the curvature and flat bottom which enabled the boats to maneuver through Venice’s shallow canals. The name gondola, some say, came from the Latin word, cymbala –meaning small boat or from the Greek word, kuntelas –meaning short (kontos) and shuttle (helas). Then there are those who say the word actually derived from the Latin, cuncula –meaning small shell. Whatever the derivative, the gondola evolved into an impressive, romantic watercraft.

There were about 40 different types of gondolas. They included merchant ships which took goods to foreign countries, local transportation, and regatta boats. The barcheta a massoche, barcheta da fresco, barcheta da parada or gondola lagunar was for all means of local transport. Gondolino da regata was for racing. Some time later, a small cabin called a felze was added to the middle of the crafts used for local transportation perhaps to protect the society’s upper echelon from cool nighttime temperatures and peering eyes.

By the 1500s, the banks of Venice’s canals were teeming with boatyards called squeri from the Greek word, eskarionor eskharion. The skilled art of boat making was passed down from generation to generation until government labor laws, especially regarding children, impeded the practice. Today, there are less than four squeri in operation. One is owned by an American Thom Price. He opened his in 2002.

The standard gondola has 280 pieces of eight different types of wood: oak, chestnut, cherry, larch, fir, elm, linden, and mahogany for the hull; iron for the stern, prow, forcola or oar holder, and the front ferro, which was constructed for protection and counterbalance. The asymmetrical shape with left side longer and wider than right, was purposely created to balance the boat as the oarsman pushed off or stroked forward. All gondolas were and still are-abiding a 17th century law- painted a dignified black. It takes about three months to two years to build one. Oars, by the way, are made from beech wood.

The job of the gondoliers or oarsmen is also steep in tradition. Only those of Venetian descent were allowed to take up the profession. Today, many of them own their own boats. They are also required to wear striped tops, black pants, and dark shoes. Hats are optional as is the singing. Many Renaissance paintings featured black or African gondoliers. They were possibly slaves of gondola owners since slave trading was in full swing at that time. An example of this is the painting titled Miracle at Rialto by Vittore Carpaccio, 1494.

The 1500s were an exciting and bustling period in the Italian city and a lot of it centered on the canals. Trade, wealth, politics, religion all intertwined and this was reflected in art. One of the first to paint Venetian scenes with gondolas was Gentile Bellini. Born circa 1465, he studied under his father, Jacopo. Gentile’s favorite subject was narratives of life in Venice. His style was a Gothic flair. His gondola painting is called The Miracle of the Cross at San Lorenzo Bridge, c.1500. Bellini died in 1507.

Vittore Carpaccio, mentioned earlier, was born in Venice (though some believe it was Slovenia) in 1465 and died in 1526. He was an apprentice of Gentile Bellini and painted Venetian narratives and landscapes. His style was Early Netherlandish. Another painter, Giovanni di Niccolo Mansuieti, 1485-1526, was also a student of Bellini and did panoramic scenes of Venice in the height of its prosperity. He had wonderful penchant for detail, especially when painting interiors and fashion. His gondolas are seen in TheMiraculous Healing of the Daughter of Benvegnudo of San Polo and Saint Jerome Praying, c. 1515-1520.

Journeying into the 1800s, artist Giovanni Antonio Canal, 1697-1768, known as Canaletto (little Canal) because his father Bernardo was also a master Venetian painter, was known for painting or etching historical imaginative accounts of Venice in the 1500s. He was an apprentice of his father, who painted fantasy scenes for the theatre. That probably influenced him. One of the works in which he included gondolas was The Grand Canal Looking down to the Rialto Bridge. He painted this in the last decade of his life for his German patron, Sigmund Streit.

Nowadays, gondolas are used mainly to ferry tourists through Venetian canals to give them a taste of what it was like in the old days. The style of the crafts is sleeker and more maneuverable. In fact, the banana-like shape was the late 19th century invention of squero owner, Domenico Tramontin. There are roughly 400 to 600 gondolas in operation. Some travel down the famous Grand Canal. Others row through narrower ones. Today, they all compete with the faster speed boats and water taxis.

If you want to be trusted back in time to savor a bit of the romance of Venice during the Renaissance period, be prepared to pay a hefty price or to haggle. Although booking your ride with your hotel’s concierge would alleviate the latter. Gondolas have also been introduced to many American states including Nevada (Las Vegas), Texas (Austin), and California (San Diego). So, you don’t necessarily have to travel to Italy for the experience, but it is worth it.