I love writting hubpages because it's easy to create attractive article because of my earning from hubpages.

Not only Delhi, the pride of India, the Red Fort is famous all over the world for its glory and fame. The Mughal Empire, which ruled the Sultanate of Delhi for more than 200 years, took over the entire Sultanate from the Red Fort. It is situated in the heart of Delhi, where now there are many museums to see. This is a historical artwork, which people from far off countries also come to see. It was built in 1648, and at that time was the kingdom of Shah Jahan, the fifth Mughal ruler of the Mughal Empire, and Delhi was called Shahjahanabad. The Red Fort was built with red stone, so it was called the Red Fort. The architecture style of the Red Fort is very unique, the garden, palace, walls, specials, everything is very thoughtfully built here, there is a glimpse of different culture of India.
[21/08, 10:52 pm] Pravas: After Independence at India's Shan Red Fort, Pandit Jawaharlal Nehru first hoisted our national flag tricolor. After this, every year on the occasion of Independence Day i.e. Independence Day, flag hoisting by the then Prime Minister takes place.
‌[21/08, 10:53 pm] Pravas: Emperor Shah Jahan thought of shifting his capital Agra to Delhi in 1638, after which construction work of the Red Fort was started in Delhi. Shah Jahan's favorite color was red and white, so his stone was chosen red. It was designed by the then architect Ustad Ahmad Lahori, who also designed a great masterpiece like Agra's Taj Mahal. The fort was built on the banks of river Yamuna, the fort is surrounded by the river on three sides. The construction work of the fort started on 13 May 1638 on Muharram, the holy day of Muslims. The first foundation of the fort was laid by Ijjar Khan. Shah Jahan wanted his fort to be the largest in Delhi, he wanted it bigger than the forts of Lahore and Agra.

It took 10 years to build the fort, it was completed in 1648. Sheesh Mahal is located to the north and south of the main fort. A special palace has also been built here, which used to be the private room of the king, where they used to sleep or worship. Ijjat Khan, Alivardi Khan, Mukermat Khan were mainly involved in the construction of the fort. Under his supervision, the work of the fort was completed. Mukermat Khan was very special to Shah Jahan, when the fort was completed, he was not in Delhi, but went to Kabul in connection with the work of the Sultanate. After writing to Shah Jahan from Mukermat Khan, he told that his palace is ready.

On the first day when Shah Jahan was coming to the palace, on that day the palace was decorated like a bride. Preparations were made for the celebration. The smallest thing of decoration was taken care of. Where the Shah Jahan assembly was held, the Deewane Khas was specially prepared, its roofs, walls were carved, silk sheets were used. A large chandelier was placed in the center of Diwane Khas, which was built in Khas Ahmedabad. Flowers were showered as soon as Shah Jahan reached the court. Shah Jahan distributed a lot of jewelery, coins and diamonds to everyone.

The kingdom of other rulers in the Red Fort -

After the Mughal ruler Aurangzeb came to power, the financial and administrative structure of the Mughal Sultanate was different, the Mughal Empire collapsed by the 18th century. Aurangzeb built Moti Masjid in the Red Fort under his rule. After Aurangzeb's withdrawal from power, the Red Fort remained unclaimed for 30 years, waiting for its ruler. In 1712, Jahandar Shah was made the ruler of this place. Within a few years, Farrukhsiyar became king by killing him. Farrukhsiyar looted a lot here, the upper wall studded with silver was converted into copper. Muhammad Shah came to the Red Fort in 1719, he was known as Rangeela Raja. He ruled here until 1739, after which he lost to the Persian emperor Nadir Shah, who later succeeded to the throne of Nadir Shah. Nadir Shah had hollowed out the Mughal Empire from within, after staying here for 3 months, he went back to his place. In 1752, the Marathas won the battle of Delhi. The Marathas lost the third battle of Panipat in 1761, after which Delhi became Ahmed Shah Durrani.

Marathas fought the British East India Company in 1803, in which they were defeated, and both Delhi and Red Fort were not entitled to Maratha. After winning the battle, the British made this historical place of the Mughals their home. The last Mughal was Bahadur Shah 2, who lived in the fort, he defeated the British in the battle of 1857, but he could not rule here for a long time. After the British took possession of this palace, it was completely changed, Diwane Khas, Moti Mahal, Sheesh Mahal, garden, harem, furniture, everything was broken. The British looted all the valuables, and kept them in their secret treasures, or rather they looted India from this. 2-third interiors of the fort were broken. During 1890–1900, the British Lord ordered the reconstruction of the broken part of the Red Fort.

Firstly in 1747, Nadir Shah robbed and stolen the Red Fort, after which the British stole whatever was left. British officers robbed from here and auctioned it in front of big people. The same thing happened with Kohinoor, the pride of India, which the British took from it, which is the beauty of London today.

Struggling for independence, India's freedom fighters were often kept in a prison built in the Red Fort. On 15 August 1947, when the British left India, the first Prime Minister Jawaharlalji hoisted the flag of his country's flag at the Lahore door of the Red Fort. After independence, the Red Fort was made an army cantonment. Until 2003, a large part of the fort was in the Army's part, but after that it was given to the Indian Archeology Department for repair.

The structure of the Red Fort is mainly its walls, main door, audience hall, royal palace built on the banks of river Yamuna. Apart from this, below you are told other places -

Chhabri Bazaar - It is present in front of Red Fort.

Lahori Darwaza - This is the main door of the Red Fort, it was given this name due to facing towards Lahore. The flag hoisting every year since independence, and from the balcony here, the Prime Minister reads his message to the country.

Delhi Darwaza - It is on the south side of the fort. Its form, structure is exactly like the main Lahori door. Both of the doors and huge elephants of stone remain. It was disbanded by Aurangzeb, but in 1903 it was rebuilt by Lord.

Pani Darwaza - This is a small door, located in the southeast. It was near the banks of the river, so it got its name.

Chatta Chowk - There is a Chatta Bazaar as soon as you enter from Lohore Gate, here used to put a heart during the time of the Mughals, where silk, jewelery and other items were sold.

Naubat Khana - This is also called Nakar Khana. It is situated on the eastern side of Lahore Gate, this palace was specially built for musicians, where Sangeet Sandhya was held at night.

Diwan-e-Aam - This used to be the main court of the king, here they used to take all decisions. It was built 540 feet wide and 420 feet deep. The gallery was built around it. There was also a hall for the public in front of it.

Mumtaz Mahal - It was built for the wife and tens of kings, there is a museum here today.

Rang Mahal - Like Mumtaz Mahal, it was built for the queens. There was also a pool in the middle which was filled by the Nahr-e-Bahisht (it was a canal that connected the palace with the Yamuna river).

Moti Mashjid - It was built by Aurangzeb in 1659, it was Aurangzeb's private mosque.

The Red Fort is situated in Purani Delhi, which is the main tourist spot of Delhi. Thousands of people come here every year. It is open to the public 6 days a week, on Monday it is closed. To enter here, the ticket of Indians is Rs 10 and foreigners Rs 150. It is open from 9:30 am to 4:30 pm. There is a sound and light show every evening, which shows the history of the Mughals. It costs 50 rupees to see this light show separately. This light show is the main attraction of the tourists. Here some palaces have been kept in the same kind of punishment as before, so that people can get to know our old culture closely, and can also see history.

Here the mosque, Hamam is kept closed for public. Lahore Gate is also decorated by handicraft, many old things are kept in the museum here.

To avoid terrorist attacks, full care is taken of the security of the Red Fort. Its security is further strengthened during Independence Day. Delhi Police and military teams monitor it well. This is a no fly zone area, meaning no plane can fly from here.

The Red Fort is the heritage of our country, which is the responsibility of our countrymen. We have to keep it completely safe. The Red Fort has seen the rule of many kings, it has seen the happiness of a king and the sorrow of someone. The Ayeshi of the Mughals, along with Raunkeen, are also see the British oppression. We are proud of Indian heritage. 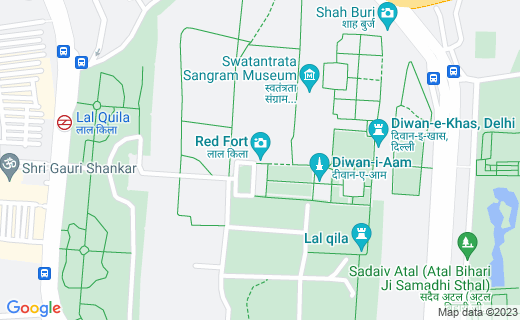