How have historians explained the fall of the British Empire?

As early as 20th century, there were cartoons popping up depicting the fall of British Empire. This was a sad way of representing the fate of the empire which was once called “Empire where the sun never sets”. The British had become quite content and prideful and had forgotten to establish safe borders and provide a great sense of nationalism from being grateful for their past victories where they fought valiantly one after the other for centuries. They had become soft and comfortable as their wealth grew. Soon it proved to be obvious that there was no real benefit in doing business with the British as they lost their ability to protect commercial interests overseas and home. This pride weakened over the years and finally ended up knocking down its door after WWII. They found themselves fighting a war that they were not prepared and as the result had to pay a heavy price. We are going to see how the fall started and gradually.

In 1763 Great Britain attained the height of its power and dominion which led many Englishmen to believe they were destined to change the course of the world, shaping it in Britain's image similar to what the Roman empire, they felt greedy to make more money and power. This led them to lose their foothold in the colonies. The British who lost the American colonies were not solely responsible for the catastrophe which overtook the empire. As Benjamin Franklin said' The British Empire was at Best, a fragile Chinese vase which required more delicate handling'.Here we will try to understand why the British Empire started to decline from starting of the tale in 1781 when General Charles Cornwallis' surrendered the American colonies to George Washington and ends with the British transfer of Hong Kong colony to Chinese sovereignty in 1997.

One of the main reasons for the downfall of the British Empire was in its economic. This effect had started with the rise in cost for military expenditure and war with its colonial rivals Spain, France, and Holland .The money raised for the military expenditure was taken from the colonies, by adding harsh laws, restricting trade routes, imposing high taxes and controlling the exports to other colonies has made the life in these colonies difficult. Those who benefited most were none other than British Empire because it was largest colonial power during that time. This led to many colonies to revolt against the empire. British fortunes suffered high tide of during the imperial the conquest from 1897 to 1907. During the Boer war in 1899-1902, British government felt war against Boer republics within the South African proved to be costlier and longer .Even though they won the war, British empire saw the world position erode. With increased threat of new colonial power which rose in the 19th century like the United States and Germany which started to make a major naval and army force which led to the colonization of Africa. To counteract the threat, British Empire had to build even bigger force. This led to increasing in expenditure from which money was taken from other colonies.

Another reason for the downfall of the British Empire is Mercantilism. Mercantilism according to Oxford dictionary is a belief in the benefits of profitable trading. It is widely used in the sixteenth to eighteenth century. The main goal is to increase nation’s wealth by imposing harsh government regulations concerning nation’s commercial in the interest of the British Empire. It is believed that national strength can be strengthened by limiting imports via increasing the tariffs and maximizing exports within in the empire. This approach assumes the wealth of a nation depends on possession of precious goods like gold, silver, spices. This is brought stagnant by the economy as every colony wanted to export and no one wanted to import, this led to various revolts against this idea and stressed for free trade later. One such example is in colonies in America. As British Empire was largely shaped on Economic Nationalization'. This was done through mercantilist approach. It projected to grid the nation for ear by recruiting its financial strength and fall of its rivals. This led to many measures in the colonies like an introduction of laws of trade. Some these were Navigational ACT, STAMP ACT, SUGER ACT, and TEA ACT. The purposes of these acts were sole to fulfill the demands of the mother country, like to consume its manufactures, produce raw material and to adopt its shipping. It was meant to hit on France, Spain, and Holland in the struggle for world dominance. The first act passed was the Navigational Act came upon in 1651 and was enacted by the British Parliament into statute law.The acts declared the following things: only English or English colonial ships could carry cargo between imperial ports, certain goods, including tobacco, rice, and furs, could not be shipped to foreign nations except through England or Scotland, the English Parliament would pay “bounties” to Americans who produced certain raw goods, while raising protectionist tariffs on the same goods produced in other nations, Americans could not compete with English manufacturers in large-scale manufacturing.

This British mercantilism system is emphasized on triangular trade. The routes linked to American Colonies were West Indies, Africa, and England. Each port provided shippers with a payoff and a new cargo. But in the Southern Colonies, the implementation of Navigation Acts has lowered tobacco prices which led to economies suffer. The triangular trade also led to a rise in slave population and increase in merchant population, the formation of wealthy class which then had dominated trade and politics throughout the colonies. This had led to smuggling of goods from other colonies .To counteract this, capital punishment and harsher laws which were enforced by the government. This fuelled anger among the people which led to the revolution and later led to the independence of America from British showing the first sign of decline according to Brendon, a Cambridge historian in his book The Decline and fall of the British Empire, 1781-1997.

The main fall happened after World Wars. Britain could no longer be able to afford the expense of administering one-quarter of the world’s population, even though they had emerged victorious in the wars. They were lots of conflicts at home and abroad. After the war, the whole Europe was left in ruins and saw the transfer of power from European rivals to the United States and the Soviet Union. The British government wanted to protect its own land which comprised the 1/600th area of the World.

Also, as the result of the war, British government understood that the various colonies of the empire were capable and deserve to govern\ themselves. These colonies could not be kept quiet anymore by giving them the excuse that “these countries are incapable of governing themselves”, as they had started to demand either through armed rebellion or peaceful protest and politics to the right to self-governance.

During the war, Britain had taken a loan from the United States to defend itself from enemies, which had made them Bankrupt. It found it hard to pay the loan and defend the colonies, causing the fall the empire.

According to Hyam, the empire was assailed by, and succumbed to, nationalist pressure and also added British imperialism folded under international criticism during the Cold War. But, British policymakers thought that the empire might be able to contribute to the West’s anti-Communist struggle in the emerging Cold War, but American anti-colonial rhetoric and geopolitical dominance effectively ended its hopes.So policymakers embraced for disengagement from the empire as a way safeguarding Britain’s international credibility and prestige. This was made unavoidable by successive post-war developments that are by opposing imperialism in Europe specifically Britain, France, Germany. This then made difficulty in balancing the ideals of the Commonwealth with the emerging European Community has led to decolonization in the world.

Over the years the British have transformed themselves from industrial colonist to full-time military colonist. Even though they were been luck during the course of the period, especially wars against their old colonial rivals like Spain, France, Dutch to New rivals like Germany, has cost them a lot. But in the 20th century, the world has lost interest in Post-imperialism especial after the World War, which led to new organizations like the United Nations which helps new states to govern themselves.

Brendon, Piers. The Decline and Fall of the British Empire, 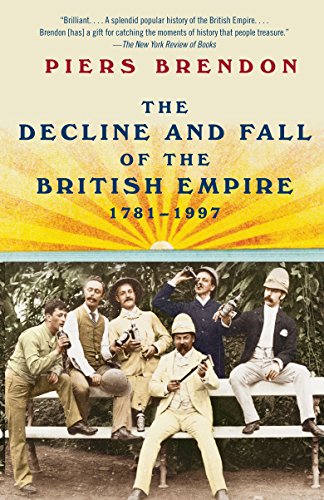 Has the British Empire lost its standing among other countries in the world from the time disintegration ?