How the Poorest Native Americans Became the Richest Tribe

One Family Can Make a Difference

The website of the Mashantucket Pequot Tribal Nation, offers no mention of the individual and family that strove hardest to gain federal recognition for Connecticut's state-recognized Western Pequot.

The state group resided south of Long Island Sound on a reservation of 214 acres with only one small shack, one outhouse, and one elderly part-Pequot woman in 1973 during the Viet Nam Conflict Era and the "Age of Aquarius."

From that low point in tribal history, the Western Pequot rose to become the wealthiest indigenous people in America.

The nearby Eastern Pequot Tribal Nation is still only a state-recognized tribe in Connecticut.

An attorney helped one member of the Haywood Family gain federal recognition for the Manashtucket Pequot beginning in 1973. Today's federally-recognized tribe became our richest native nation within 25 years.

During the early 1970s and the rise conservation, Earth Day, and awareness of our Native North Americans' Red Movement, young attorneys began to defend the rights of native tribes.

The lawyers filed suits for the return of original indigenous homelands taken or purchased illegally by leaders in Eastern US States. This purchase or confiscation was a violation of George Washington's 1777 protection treaty and his 1790 Non-Intercourse Act that prevented such state purchases without specific federal approval provided first.

After the American Revolution, many eastern tribes signed treaties with individual states that were once British colonies, but they did not sign treaties with the U.S. Federal Government. Therefore, they were not afforded rights under the U.S. Constitution or federal benefits of any kind.

In fact, Native Americans were not given U.S. citizenship until 1964, after failed attempts under the administrations of Truman, Eisenhower, Kennedy, and Johnson to eliminate all tribal designations and related entities.

Loss of Tribal Name and Land

The Pequot War (1636-1637) is one of the most controversial and important occurrences in Colonial and Native American history.

The tribe was halved by European infestation of smallpox before the war to about 4,000 individuals. The British sought control of the rich Dutch-Pequot fur trade and encroached on the native homeland. Natives killed a series of English "trespassers" and Connecticut Colony itself declared war on the Pequot in 1637.

The surviving 3,500 natives abandoned their homelands as fighting continued in several British campaigns. In a treaty signed on September 21, 1638; the Pequot were to be divided between two other tribes and never to use their own tribal name again. 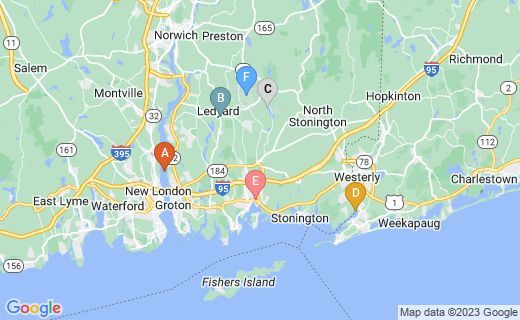 Foxwoods Resort is actively successful here today on the reservation.

Attorney Tom Tureen graduated from law school in 1969 to work for Native American rights such as federal recognition and a return of original homelands (Jeff Benedict, Without Reservation; 2001).

Working with Tureen, John Stevens of the Passamaquoddy Nation in Maine, and Susan MacCulloch sought out Northeast tribes and traveled from Virginia to Louisiana to interview hundreds of people (Benedict, pp. 17-23).

Tureen met members of the Hayward family, in particular Richard A. "Skip" Hayward. The attorney helped Skip in incredible efforts to gain federal recognition for the Manashtucket Pequot beginning in 1973. Today's federally recognized tribe became our richest in the native nation by 1998.

The tribal museum contains scant mention on Skip Hayward, who was elected the first chairman (Chief) of the tribe and served for 23 years until 1998. He lost to Kenneth Reels in 1998 and 1999, but served as vice chairmen.

Kenneth Reels began his career in an auto salvage yard (Benedict, p. 230), joining the tribe in 1985. He worked for tribal infrastructure improvements and was elected vice chairman.

While Hayward was working off the reservation recruiting additional investors for his vision of business expansions, Reels changed procedures in the tribal government.

Reels dropped the 1/16 blood requirement for tribal membership, further hiring employment headhunters to secure African American workers in all the tribal businesses (Benedict, pp. 230 - 246). It was later found that archived genealogical records with the local government had been altered to change "race" from "black" to "Pequot" for some tribal family lines.

Reels began using business revenues to pay huge stipends to some tribal members, resulting in arguments and violence. He also slashed the budget for Hayward's biggest dream, the Pequot Museum and Research Center, and reduced staff to an inoperable number. Skip Hayward is practically nonexistent in the museum.

During 2012 -2013, tribal council members' names were largely Whipple, Sebastian (related to Reels), and Colebut, but the Haywards largely disappeared from the rolls.

We do not expect to see revisionist history and internal politics to such an extent in Native American Nations, but here it is. Jeff Benedict's evidence is that Reels forced out white-looking Pequot in favor of African American-looking Pequot to the extent that only "two whites" (Benedict, p. 294) were left on the tribal council just before Hayward left, including Hayward.

Injustice to the Skip Hayward Family

In the early 1970s, Skip Hayward, with little Native American blood, had difficulty holding a job. He worked as a pipe fitter, a student preacher, a milkman, a fast food manager, and other jobs.

Skip's grandmother, Elizabeth George Plouffe (1894-1973) was of part Pequot blood and the last surviving member of the Western Pequot from the 1910 U.S. Census. Kenneth Reels as Chief dropped census corroboration for membership in 1998. This opened the way for non-native membership.

Elizabeth lived on the small reservation her whole life and while researcher Benedict has felt she may have belonged to another tribe other, the Pequot deny it.

After Elizabeth died, attorney Tureen discovered that 800 acres of the tribe's lands had been purchased by the State of Connecticut illegally, against the requirement of George Washington's Non-intercourse Act of 1790.

Violations included not only the Western Pequot, but dozens of other tribes along the Eastern Seaboard, many of them not recognized by the federal government.

Federal Recognition and a New Reservation

Seeking federal tribal recognition and grant funding, Hayward gathered his surviving extended family to organize as a tribal government and live on the 214 acre reservation left by his grandmother.

On August 10, 1975; Hayward became chief and called a meeting on the reservation to gather residents (Benedict, pp. 60 - 65) and provide a constitution as written proof of tribal government. Skip proved that his family all traced back to the Pequot in the 1910 census, and provided a 1973 photo of his grandmother in native dress and jewelry, standing with her youngest granddaughter Theresa.

President Ronald Reagan vetoed the first congressional act to recognize the tribe, but signed the second act on October 18, 1983. The new tribe received a little less than $1.2 million in federal funds that year.

The Western Pequot repurchased enough lands within the original reservation and and purchased outside parcels along Route 2 to make a much larger reservation.

Anyone who can trace family heritage to the Haywoods, especially to Elizabeth, has a good chance of tribal membership. However, many have joined without native blood at all.

Pequot tribal council in 2012, which has included two convicted felons, has dropped the requirement that members of the tribe have any Pequot blood at all. [Remember that Reels did this, purportedly without the knowledge of Hayward.]

The Pequots of the federally recognized group stopped issuing millions of dollars in stipends to adult members of the tribe in 2012.

The tribe still helps out with college tuition and jobs, however and the tribal law gives preference to qualified and documented Pequots, their spouses, and members of other US federally recognized tribes for hiring at Pequot businesses.

Some early businesses failed on the reservation, such as maple syrup production and a Mr. Pizza restaurant but others took their places and grew inordinately large.

Skip Hayward brought in a huge bingo hall, followed by the Foxwoods Resort in 1992, but Kenneth Reels seems to have wasted some of the initial proceeds in over-large stipends mentioned above.