Fat Albert of the Daintree

Saltwater crocodiles in Australia are most often associated with the waters of the Northern Territory but northern Queensland has more than its share of these reptiles surviving hundreds of thousands of years. Crocodiles are powerful beasts yet the statistics of being attacked are minimal. If you are about to travel to this tropical paradise you might want to know the best way to avoid a crocodile attack in the Great Barrier Reef and stay safe while you are in the waters of the Whitsundays.

What are the Chances of Being Attacked by a Saltwater Crocodile?

Crocodile sightings in the Great Barrier Reef are few and far between, but it is always wise not to be complacent. These magnificent yet dangerous creatures do inhabit the waters of our tropical paradise but sightings in the sea or on the islands are few and far between. The danger lies in the rivers, but even then attacks are not a normal occurrence.

How to Avoid Crocodile Attacks in the Great Barrier Reef

The short answer to 'how do I avoid being attacked by a crocodile in the Great Barrier Reef' is, of course, don't go near the water's edge. But the waters of the Whitsundays and the reef offer some of the best opportunities to experience marine life in its most natural state - something you will find difficult to see anywhere else in the world. The reef itself is not alive with crocodiles as are the saltwater rivers that lead from the ocean into the rainforest. The further north you go, the more chance of seeing crocodiles in the wild.

Coming to the Whitsundays?

The Dangerous Creatures of the Great Barrier Reef series and 'How to Avoid Crocodile Attacks' has been commissioned by Toscana Village Resort, Airlie Beach.

Crocodile Talk in the Whitsundays

Crocodiles vary in size from the 20 centimetre babies to the whopping 5 metre (15 feet) adult. The fear and anticipation of a crocodile sighting is intermingled with awe. This is an awesome sight to behold. Even without knowing the statistics, at one glance any one can see this beast is one of those dangerous creatures you don’t mess with. View it from afar by all means but take caution to be with a group under direction from a trained guide. To venture into the land of the crocodile without knowledge is fraught with danger.

In the water a crocodile can move with lightning speed. One moment he will be sunning himself on the banks of the river yet in an instant he takes one almighty dive into the waters and is gone. Those waters are the same as the guide’s boat, the one the tourist is sitting in, eagerly awaiting a chance for a further sighting.

Tours are available that have been designed solely for the purpose of catching a glimpse of this prehistoric critter. The tours are available in the Whitsundays along the Proserpine River stretching out from the Goorganga Plains. Goorganga translated loosely from the language of the indigenous people of the area to ‘home of the big crocodiles’. It has been reported there may be more than 100 saltwater crocodiles in the Proserpine River. This is a very good reason to stay in your car if you want to be absolutely sure there is no chance of attack.

Locals enjoy the mud crabs that grow in large numbers under these waters of the Proserpine River. Saltwater Crocodiles have mud crabs listed at the top of their daily menu, too. Man versus crocodile over the fight for the biggest crab, tread cautiously but never in the water or on the banks of the river. The best advice is to drop the net, move away from the edge of the river bank, maybe do a little fishing several hundred metres away. On your return hoist the net as quickly as you can into the boat and get out. Count the crabs and delight in the haul when you are safe on dry land.

Saltwater Crocodiles on the Riverbanks

As for the Great Barrier Reef the chance of sighting a crocodile, either in the water or on the banks of one of the islands, is extremely rare. Crocodiles prefer the calmer waters of the rivers. This is where they mate, breed their offspring and while away their time finding food. The waters of the Whitsundays are most enjoyed by tropical fish, turtles, coral and the human species.

While statistics report 97 crocodile attacks resulting in 29 fatalities in Australia’s written history (24 fatalities from 1975 to 2009) the reality of those attacks are more often than not brought about by the behaviour of people. Swimming at night in areas known to be infested with crocodiles, or swimming under the influence of alcohol are activities to avoid.

Nevertheless, the saltwater crocodile is a beast not to be taken lightly as he will indeed take you lightly, quickly and without a thought to your wellbeing. But in the Whitsundays or any area of the Great Barrier Reef chances are you will avoid not only an attack by a crocodile but even a sighting.

The Dangerous Creatures of the Great Barrier Reef Series has been commissioned by Toscana Village Resort, Airlie Beach 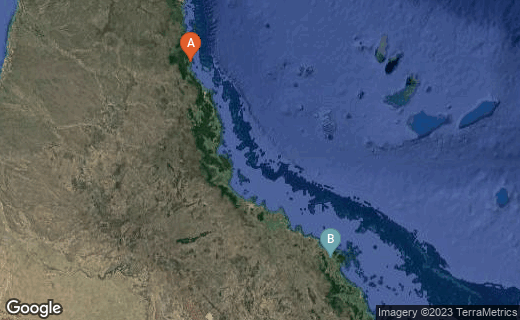 Home to many of the big Saltwater Crocodiles