How to Direct a High School Play - Casting the Show

You have chosen a play. Dates are set. Auditions are done. Now you must cast the play. As I have stated in the first three articles of this series, this is the most important step in the process of directing a high school play. Choosing well who plays which role will make your job over the next few weeks much easier and less stressful. Here are my tips for making the best choices while casting your show.

When I cast a show, I start by typing out the cast of characters on a chart. Then, I go through each actor who has auditioned. Using a pencil, I write the actor’s name next to the role or roles he or she has requested. I also write their names next to the role or roles that I believe they would play well. Then I start the process of narrowing down. I look at each character and decide who my first and second choices are for that role. I leave only those two names and move on down the list. When I am finished, I go back and make the final decisions, making sure I haven’t left anyone out.

When I first started working in the world of high school theater, I was working in the role of faculty liaison for a visiting theater residency in my school. Before he posted the cast list, the director came to me and asked me if there were any students who were “must casts.” I didn’t know what he was talking about. I assumed that he would cast the most talented students in the lead roles, and the less talented in the smaller roles. He informed me, however, that there is much more that goes into the decision sometimes.

Sometimes, it is important to be diplomatic. Often times, the children of people who work in your school will audition for your show. You have to work with these people, so it is important to find a good fit for their children. You will also have students auditioning who have very involved parents. You need all the parent support that you can get, so you may want these students on your “must cast well” list. “Must cast” students don’t need to be cast as a lead, but you may wish to consider giving them roles with speaking lines. Make decisions that you can live with for the sake of your production and for the sake of your professional existence.

Talent Vs. Time In

When casting the show, you certainly will want to put the most talented actors in the lead roles that fit them best. However, along with being diplomatic, it is important to weigh talent with “time in.” When I cast a show, I always start by considering the best roles for my seniors who have spent four years working in the drama club’s productions. These students have worked hard over the years to fundraise, build sets, hang production posters, act in whatever role I cast them in, etc. They have put in their time. Without them, my productions wouldn’t exist, and so I give them the roles they want or have the best talent to play. Sometimes, this means that an extremely talented freshman gets a smaller role. I can live with that, as I know that the talented freshman has a few more years to put in his time, learn, and grow with our little company. Sometimes, this means that a senior who has never stepped foot on stage before gets a smaller role. Although that student is graduating, I prefer to reward those that have worked hard over the years. When you are casting your show, you will have to decide which is more important: talent or ‘time in.’

A Place for Everyone

Remember, you are directing high school (or middle school or community) theater. You are not directing a professional production, and you are certainly not on Broadway. It is very important to keep your show in perspective and maintain an atmosphere of fun and learning. One way to do this is to find a role or job for every student who is interested in working on the production. Sometimes, you need to get creative in order to find a place for everyone, but it is usually worth it in the end.

First, you will want to fill the roles listed in the play’s cast list. Then, see how many students you have left. How many of those students want an onstage role? If you have a lot of students “left over,” then it is time to start creating roles. Here are a few ideas:

· Split a role. – Are there any roles that you can use more than one actor by breaking up the lines between two or three students? I did this recently in a middle school production of Sherlock Holmes. One of the roles was a flower woman. I needed more roles to fill, so I broke this role into flower woman 1 and flower woman 2. It worked in this instance, because I was able to put one more student on stage, and there were fewer lines for these two sixth graders to memorize. In this same show, there were also two or three written newsboy characters. I had a lot of sixth graders. I took the “newsboy” scenes, which were really introductions and transitions, and I broke the lines up between several newsboys. This allowed more students to have a line. Plus, memorizing lines for such young students is difficult, so breaking them up made it easier for them to learn their parts. We made a big deal out of these short, simple scenes, and the students had a blast.

· Extras – Read your script, visualizing the show onstage. Where can you place extras in these scenes? Do you need a servant, a townsperson walking through on the street, members of a crowd scene? There are usually non-speaking extra parts that you can incorporate into any show. I try my best to list these students on the cast list with a character name or description, as just listing them as an “extra” may make them feel like they are not really needed.

· Write in a role. - Often times, the performance rights to a show will state that you cannot alter the script without permission. Use your judgment if you plan to write in an extra role. You certainly don’t want to break your agreement with the publisher or anger any good writers out there. That being said, sometimes you can create roles and add them into your production. A couple of years ago, I directed a show that had a scene with actors auditioning for a travelling show. I had a sixth grade boy who was an amazing back flipper. So I wrote him into this scene. The scene consisted of a band of actors looking for a new actress to join them. Several “actresses” would come onstage, say a line or two for their “audition” and then they would exit. The band of actors would then deliberate while waiting for the next actress to audition. Between the written lines of text, while the band of actors was deliberating, I would incorporate my sixth grader’s acrobatics. It was slightly ridiculous, but the audience loved it, and it got a lot of laughs. 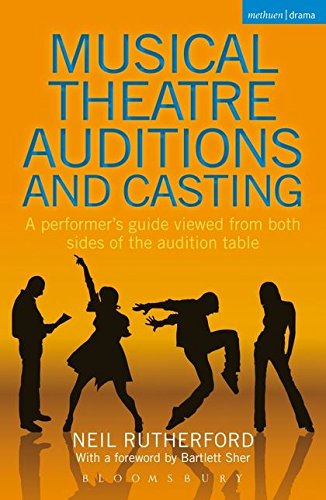 Musical Theatre Auditions and Casting: A performer's guide viewed from both sides of the audition table
Buy Now

After you have weighed all the options and made your final decisions, it is time to post the cast list. I try to do this a day or two after auditions. Waiting longer than that may kill the energy and momentum of your production. In this final step of the casting process, I have a few important tips.

1. Don’t ask advice. I have made this mistake more times than I can count. If you really want an outsider’s opinion, because you can’t make a choice, then ask someone you trust to help you finalize the list. However, if you have made your decisions and you are firm in your vision, don’t ask anyone’s opinion before you post the cast list. Doing this just invites headaches, because everyone involved will have their own unique vision for your show. You are the director, and they will have to live with your choices.

2. On the bottom of the cast list, I always write the following: If you don’t see your name listed here, please see the director. Sometimes, we make mistakes. Sometimes, we choose not to cast a student or two. In either case, I want to be the one to face that student. If I truly left off a student in error, I want to remedy that error immediately. If I have left off a student on purpose, I want to explain my reasoning. For example, in the last production I directed, I didn’t cast a student because of his academic grades. He was failing miserably, and it is important to me that students put school first. When he came to talk to me, I explained to him that he could join our production as a member of the stage crew if he improved his grades by the next progress report. Sometimes this tactic will motivate a student to do better. Sometimes it won’t.

3. Post and run! When I post the cast list, I tend to do it during a time when students are in class. I don’t want to be standing there to see disappointment and tears when a student doesn’t get what they wanted. And there will be disappointment and tears. Remember, you had students sign off on their audition form that they would take any role given to them. Most of the time, student will dry their tears, suck it up and arrive at rehearsal with a smile on their face. Once in a while, you will have to address negative behavior displayed by a disappointed student. I tend to address these issues with the whole group. They all should know that I chose them for their part for a special reason and that we are there to work together.

In addition to casting students in the onstage roles, you will need to assign backstage jobs to students for your production. Stay tuned for future articles in this series that will discuss student jobs in a high school theater production, the rehearsal process, and the process of collaboration.

After you have posted your cast list, including all of those behind the scenes jobs, sit back and relax for an evening. You have just completed one of the most important jobs of the directing process!