First of all, children's traditional games which become "classic" do so for a reason: they are entertaining AND they offer incredible learning. Any game with rules and an order for procedures teaches memorization, following directions, patience, listening skills and visual observation. Additional benefits, depending on the game, are social skills such as taking turns, being a good loser and a good gracious winner, physical skills, and developing strategy. If a score is kept, any classic game teaches or reinforces counting, recognizing sets (on a die), comparing numbers, adding and subtracting numbers, and place value. Other games which have become classic help a child with vocabulary: learning names of items or animals, descriptive words, and correct pronunciation. If it is a board game with written words, consider the reading practice. Classic games are classic!

The traditional BINGO just aches to be exploited with equations for the students to solve in order to figure out what number has been called. As a teacher, I realize that students who excel at math may not necessarily be fast workers or auditory learners. Therefore, I make 5 big columns on the blackboard for each of the letters of BINGO. Then, as I pull a tile to be announced – such as B 6 , I do not say “B 6,” but I announce an equivalent expression and simultaneously write it in the correct column on the board.

At even higher levels I might call it the square root of 36 or employ order of operations with 2(30 divided by 10).

Every class I have done this with loves the challenge and the mystery.

A Wise Modification to the Hiding Game Called Four Corners

Think of a game that children like to play. If you are an elementary classroom teacher in the USA, there are well-known quiet games played in the classroom. For example, the game called “Four Corners” is much like Hide and Seek with the “It” blindfolded and relying on the sense of hearing to call out one of the corners. all the children hiding at that corner are "out." Normally, we call the hiding places “corner number 1,” or 2, or 3, or 4.

However, if you are teaching lessons in a subject area which include a list of four items you can have the class play Four Corners this game, but with new names for the corners.

For geography and map reading, rename the corners North, South, East, and West.

For Christian religion - the Gospels: Matthew, Mark, Luke, and John.

For language arts, use the types of sentences: declarative, imperative, interrogatory, and exclamatory.

This adjustment to the game reinforces the students' recall of the list.

Hasbro Memory Game
I own many versions of this and used it with my sons and with daycare students.
Buy Now

There is a box game called Memory ™ which requires players to examine a group of cards face down and choose two to turn up momentarily. If they “match” – such as a baby animal and its mother animal, or the front view of something and the back view of the same, the player may keep the cards. If not, the player must do his or her best to memorize the positions, but turn them back face down in their original places. The same game can be played with parts of a deck of playing cards, choosing pairs of the same number or face cards to mix up and then turn face down. In all versions, there is only one unique match between two cards.

Accordingly, it is totally logical to change this into a review game for a term and its definition. Obviously, any subject with defined terms will work. It will also work for visual recognition lessons. In geography, one could make pairs of country shapes and names. In geometry – figures and their names. In science – rocks, weather events, body parts, etc. In art, examples of styles. I recommend limiting the modified game to seven pairs or less.

Just the beginning of ideas -

In the classroom, I created my own system for playing Hangman, so that I could totally control the vocabulary. Hangman is a game named for the old-fashioned criminal punishment of hanging someone until death. It has similarities to the television show Wheel of Fortune in which players try to guess a word by guessing one letter at a time. In Hangman, the word is secret and the players are given the word’s number of letters on the blackboard by the drawing of an underline for each letter. Each incorrect letter guessed causes a body part of a person to be drawn on the gallows. A correct guess causes the letter to be written in its correct position among the blanks. After a previously agreed-upon number of incorrect guesses, the players lose and the drawn person is dead.

I set this up as Teacher versus The Students to encourage cooperation among the classmates. So, if the entire team of the class did not get the word within the specified number of guesses, I win a point. Usually, however, they are able to solve the puzzle and win the point.

The sneaky purpose of playing this modified version of Hangman is to review content-related words. For example, if my class had been studying continents, I might choose the word Antarctica and give them the hint that “this word is a large land mass.” Another learning bonus of playing this game is that spelling must be perfect to win. 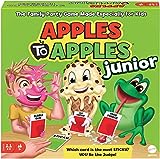 Apples to Apples Junior the Game of Crazy Comparisons! [Packaging May Vary]
This is so much fun for a mixed age group or for children who can read. Lots of imagination and humor are involved.
Buy Now

This game can be very frustrating for children. However, if you allow players to have more letters than the official seven, chances of being able to make a word increase. Also, consider making slips of paper for free vowels to give to each player for the same result. This game can help students with spellings, problem solving, and understanding the English language syllable structure which contains a vowel.

These are just a few ideas to change classic children’s games to serve to educate. Some use an existing board game and others use less equipment If you have other good ideas, please share them in the comment section. In the meantime, have fun!