How to Make a Salt Water Circuit

Everyone tells you not to keep electrical appliances in the bathroom near the tub when you are enjoying a long, hot soak. It is nice to listen to music while in the tub but keeping the radio on the edge of the bathtub.........definitely not a great idea!

Most water contains minerals and salts. Those of us who like to have softer water with an enjoyable aroma may also add washing soda which provides even extra salts. But why is this a problem? Read on dear readers and discover the dangers of electrical appliances near bathtubs.

Consider plain table salt or sodium chloride which is made up of sodium and chloride ions. All atoms like to have their orbital shells filled with a certain number of electrons. If it has far fewer than the required number of electrons, the atom tends to give up electrons and if it has almost the right number, the atom tends to acquire electrons. Sodium (Na) has eleven electrons. It has one too many to have its last shell filled so it will give up an electron to an atom that requires one. Chlorine has 17 electrons and just needs one more electron to fill its outer orbital shell. When chlorine and sodium come in contact, sodium will give up one of its electrons to chlorine. Although they now have their outer electron shells filled, they each have changed chemically. Adding an electron changes the charge of chlorine from neutral to a negative charge. Chlorine becomes a negatively charged ion. Sodium, having lost an electron changes from neutral to a positive charge. Sodium becomes a positively charged ion. As positive and negative ions, chlorine and sodium are strongly attracted and become the compound sodium chloride or table salt.

As a dry compound, sitting on your table, the strong attraction between the two ions in table salt is very strong and is nearly impossible to break. However, put this salt into water and these ionic bonds break very easily because of their electrical attraction to water. In other words, the table salt dissolves in water because of the weakening of the ionic bonds while in water. Na+ and Cl- ions float freely in the solution. Because there are positive and negative charges, water containing salts (and most water except pure water does contain some salt ions) is an excellent conductor of electricity. If you are in a bathtub and your live electrical appliance falls in the tub with you, the electrical current is carried through the water and directly to you often resulting in grave injury or death due to electrocution. As such, never treat electricity in a cavalier manner. Always take great caution and even this experiment should be done with parental supervision when performed by younger children. And please, never, never keep electrical appliances near your tub! 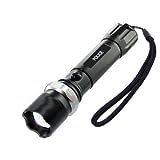 The Science Behind the Salt water Circuit

When dissolved in water, sodium chloride (the chemical name for salt) dissociates into positive sodium ions and negative chloride ions. As there are positive and negative charges present in the salt water solution, electricity can be conducted from one electrode to the other of the salt water circuit. These charged ions complete the circuit causing the light bulb to light up. Try varying the amount of salt dissolved in the water to see if the brightness of the light bulb changes.