BULLY - Stop Bullying Even When the World Encourages It

Bullying is deeply ingrained in American culture long-term, but the public is becoming more aware and fewer people are accepting bullying behavior towards themselves. it helps to hear or see others stand up to bullying.

From where does bullying come? What causes bullying and who will stop it?

Having worked with clients and patients on both sides of bullyism over three decades, I can offer some understanding from my experience, along with some peer-reviewed references.

Bullyism and its worst form, the chronic abusiveness of domestic violence, child abuse, and others is partially related to the competition of war and winning by any means – or, dirty fighting. Even in “clean” warfare or the good sportsmanship woven into sporting competition, one side usually wins, with power over the other side. Even sports have bloodshed.

From where does bullying come? What causes bullying and who will stop it?

Farthest back in time, bullying or bullyism can at least partially be tied to the survival of stronger humans against weaker individuals, from early humans to contemporary cultures. This includes the competition for resources like food, water, sex/reproduction, and shelter; up the scale to land and cattle; further up the scale to today’s tangible and intangible valuables.

Long ago, the strongest individuals took the resources they targeted and rebuffed or killed others they considered threats to those resources. it still occurs today. I see the same behaviors in the form of intense competition in the workplace, in some sports, in schools. in the rise of the popularity of Reality Shows, and even in some churches and clubs.

There is evidence that over crowding and over population fuel bullyism. The classic references for that is a 1958 experiment published by researcher Bill Calhoun in 1962. I’ve referred to the study several times on HubPages since early 2007 in discussing population, immigration, competition, and global warming and their interactions. In February 2011, a HubPages Forums thread in Politics and Social Issues opened on this specific experiment, which students and scientists have long-ago nicknamed “too many rats in a cage (or box).”

From survival, the phenomenon has transferred to everyday industrialized life: preschool, school, the workplace, clubs, churches, what have you. In a study my research group completed in the mid-1990s, the Number One problem in my county’s school systems from daycare and preschool to 12th grade was reported as violence among children and youth to one another and to adults.

Is bullyism and its violence necessary for humans to survive?

More so than in the war analogy, bullying manifests as the cowardice that picks on those smaller, weaker, or less socio-politically powerful than oneself.

Although some research shows that bullies have been bullied themselves, the targets of bullies are also sometimes some sort of threat to the bully.

The targets threaten to receive or to have the potential to receive attention, love, education, a good job, money, fame, responsibility, and authority, along with other intangibles and tangibles. Thus, bullies can be seen picking either on 1) smaller, weaker people or animals; and. or 2) people that may attract larger amounts of power than the bully. Some of the most frequently occurring and clearest cases of Number 2 in modern times are a) women abused by mates when they gather friends, are offered a job, etc. and b) children and youth that do well in school in academics; in arts, music, drama, etc.; or in all.

The research of Dr. Dan Owleus (below) is highlighted by the American Psycholocial Association. It focuses on the bully with anger and impulse control problems, the need for power, consistent defiance toward adults, and lack of empathy. This suggests a sociopath, making bullies mentally ill. This research does not directly link to competition, although a sociopath may seem to be in competition against the world, in a way, at least to people he or she rebuffs.

Bullying Can Cause Severe Mental Disorders

Bullying by peers may increase the risk of the bullied developing psychotic symptoms later in life. The 2011 study, published in the American Journal of Psychiatry, used data from the Environmental Risk Longitudinal Twin Study, which follows 2,232 twin children and their families.

Bullying, especially domestic violence and child abuse are often accelerated by the use of alcohol and drugs. Many adults perpetrators of abuse are found to suffer a Dual Diagnosis mentla health disorder (meaning more than one Severe Mental Disorder or SMD) and in my city, the average number of SMDs among the clients and patients I saw was 4 SMDS. Alcohol and/or substance abuse was one of the SMDs we usually saw.

A proportion of teens and pre-teens use alcohol and drugs, but I have no data about how this relates to their bullying other youth or younger children. It is reasonable that some targets of bullying at these ages begin to use alcohol and/or drugs to escape their related anxiety and fear. 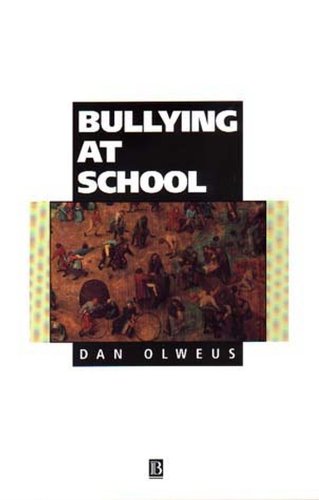 Bullying at School: What We Know and What We Can Do
Buy Now

Prevention is more effective than treatment in many conditions and diseases. For example, washing you hand often is preferable to becoming ill and dying with an untreatable strain of flu.

People are dying from the actions of bullies. Bullies sometimes kill their targets and sometimes drive their targets to commit suicide. Bullyism can be accepted as a disease and treatment offered, but it seems difficult to be successful. Prevention is more effective than treatment as it is in many diseases and conditions.

The phenomenon and potential of bullyism may ever be eradicated from our culture completely. As the planet becomes more crowded, bullyism may be stimulated to occur more than ever. Therefore, children can benefit from training to resist its actions and effects. So can adults that do not know how to effectively resist bullies.

A System of Steps

There are checklists round the Internet of steps to take to diffuse and avoid bullies.

Other steps are listed in the link below.

Comprehensive Checkists from the APA

As in the original Kitty Genovese case that brought the bystander effect of watching viloence and not reporting it to public attention, modern cases of bullying are drawing bystander effect as well in schools.

One such educational facility is Upper Darby in Delaware County, Pennsylvania according to the article Schools Implement Anti-Bullying Plans: http://delcotimes.com/articles/2011/02/06/news/doc4d4e23e8759ee618437057.txt?viewmode=2, retrieved February 7, 2011. Seven high school teens attacked an eighth outside the school on a street, while a woman walked by and ignored them. Quote from Professor Phillip Rutter:

'Bullying can cause teenagers to have suicidal thoughts, according to Rutter. He said bullying typically begins in a classroom setting and then moves to the schoolyard and bus rides. And now, with text messaging and social media sites, like Facebook and Twitter, bullying can occur 24/7. “A young person doesn’t feel any escape, which leads to suicidal thoughts,” Rutter said.'

It seems to me that parents must teach children not to bully and not to accept bullying and to take action when they see the related behavior. This must be reinforced in schools, where teachers and administrations take action against bullying behavior consistently.

After high school graduation, adults need to use their effective techniques to resist bullies at work, in college, even in clubs, in church, and at the grocery store. Universities and colleges need to continue to act against hazing rituals. In the workplace, increasing numbers of employers need to be alert to bullying and abuse on the job and to act against it. People that see bullying need to report it to appropriate authorities.

Domestic and child abuse agencies are available in many cities to help those targets, but in less densely population areas of the US, these are not always close enough to help. These agencies are part of a system that attmpts to improve itself and reach more people that desparately need their help, but domestic and child abuse are large problems with many side issues. This portion of bullying may be the longest-lived until society is able to eradicate it.

Prevention in the form of 1) education and 2) clear cut and fair rules and consequences must begin early, given the early age that violence and bullying begins.

In my research group's observations, we found a 4-year-old climbing into cribs at a daycare and biting infants hard on the back as they slept. There was a 6-year-old that jumped onto children and adults, bit their arms, and drew blood, all without intervention by the child’s parents. A few parents urged their children to physically harm other children or their own siblings. We heard substantial name-calling and put-downs among children. Many children would not keep their hands to themselves - constantly pushing, poking, slapping, etc. Many children used large numbers of R-rated profanities, all the way down to the age of 4 years old.