How To Raise Multilingual Children

Wendy is a Psychologist graduated in Scotland. She also studied Communication Sciences in Peru. Currently a Spanish teacher in France.

Multilinguism can be an option for some families. But for other families multilinguism is just a way of living and it comes naturally.

Each case is different just as each family is different. What works for one family might not work for another. The important thing is to be comfortable in your situation and happy with your child's language development.

How Many Languages a Child can Learn?

Can My Child Learn More Than One Language At The Same Time?

For first time parents it is very frustrating to hear all the criticism from monolingual friends and family. Some parents even give in to social pressure and stop teaching their children a second language thinking that it would be best for their child not to "confuse it with another language".

Raising multilingual children requires patience. As with most aspects of parenting, it's a long term commitment and there will be ups and downs.

The Case Of Very Young Children And Babies

Can children really learn a second language at a very early age without disturbing their language development?

The answer is YES, they can and it is very exciting to see their progress. With very young children, a second language is learnt the same way children learn a first language, which is to say, not really teaching them a language but exposing them to the language.

A child acquiring language abilities does so by experiencing the world. Babies learn through repetition and listening. A mother feeds her baby and tells her "time to drink your bottle" and repeats the word bottle several times shaking the bottle in front of the child. Eventually the baby -even if she cannot talk yet- learns the word that identifies the object "bottle". This can be done in several languages and the child will assimilate the meaning of the words through experiencing them. Through repetition and hands-on-context, the child figures out the language her mother is using to communicate with her.

As a parent it can be frustrating and worrying seeing how all the other children are increasing their language ability while your child is "stuck" trying to cope with two or more languages. You might even feel guilty about holding back your child. Your friends and family start telling you that "the poor baby" is getting confused and will never learn to speak if you insist in using two languages at the same time. DO NOT LISTEN to them. For a start, they have not brought up multilingual children so they do not know anything about the subject except for their misconceptions.

Remember that you are not the first multilingual family. Multilingualism on a grand scale is commonplace in many countries -Africa, India, Belgium, Switzerland- it seems to be only in certain Western countries that it is regarded with any alarm.

A child learning a second language takes longer to talk. But it is not because he is not learning, it is simply that your child is recognizing and producing sounds in more than one language system and that process takes time and practice. While his peers are coping only with one language system your child is coping with two and requires more time to assimilate, but this is normal. Do not worry, before long your child will catch up with his monolingual peers with the added advantage of being bilingual!

Will my baby be confused?

Parents worry too much about this. In reality, children's brains are more sophisticated than what we might think. In a bilingual family where different members of the family speak different languages, a child will soon work out by herself that different people use different words to refer to the same things. She will realize that what mommy calls "a blue ball" is indeed what daddy calls a "pelota azul" This is indeed a very sophisticated process, but it is a process which your child will solve at a surprising rate by herself. She will notice that different words can refer to the same object, and often that different people use those words. 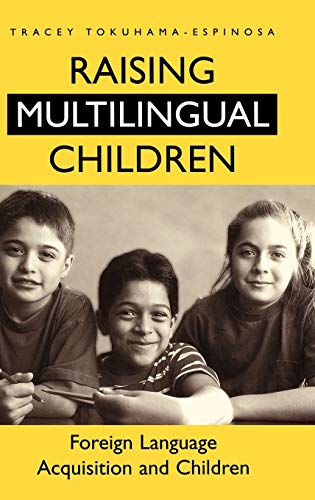 Raising Multilingual Children: Foreign Language Acquisition and Children
This text is an exciting addition to the library of homes raising children equipped to live in our multicultural world. Case studies illustrate the many ways families combine ten key factors in order to successfully raise multilingual children. The book encourages parents and teachers to reflect on their personal situations and helps them to foster multilingual skills in the children around them.
Buy Now

Multilingual children tend to speak a little later than their peers.

What Are The Benefits Of Being Multilingual?

Research suggests that bilingual children may develop more flexibility in their thinking as a result of processing information through two different languages.

Research also supports what many parents have long experienced: that multilingual children have better-developed linguistic understanding.

One of the most strongly established findings of educational research, conducted in many countries around the world, is that well-implemented bilingual programs can promote literacy and knowledge in a minority language without any negative effects on children's development in the majority language. This means that learning a minority language helps learning in general rather than causing problems.

Within Europe, the Foyer program in Belgium which develops children's speaking and literacy abilities in three languages (their mother tongue, Dutch and French) in primary schools, most clearly illustrates the benefits of bilingual and trilingual education.

When Is Too Late To Introduce A Second Language?

Never. We are always learning. However the ideal age is up to 9 years old. Up to about the age of 8 or 9 it has been shown that intensive exposure -for example, emigration, or attending a monolingual foreign-language school- can still produce a fully bilingual adult. Beyond that age, you may find that your child assimilates the new language more or less well, depending on several factors. For example, teenagers may be self-conscious about making mistakes and they might not give their second language a fair try.

The key is to let your child know that the new language is useful. For example, speaking French will allow him to have new friends to go out with when you travel to France.

Raising Multilingual Children, When is it Too Late. My Personal Experience

It is never too late to introduce a second, third or even fourth language to your Child. As a matter of fact I raised my daughter in a bilingual environment (English/Spanish). When she was 3 we moved to France and she started learning French. At the aged of 5 she was already speaking Spanish, English and French. Now she is 13 years old and can fluently speak, read and write in all three languages. As a bonus, she has picked up fairly easy German and Latin at school which she started learning at 10.

Do not underestimate your child's capacity to learn, It is true that some mixing will occur, but that is both harmless and temporary. I remember my daughter used to mix English and Spanish, but eventually as her vocabulary enlarged she corrected this phenomenon by herself.

Another thing not to underestimate is the value of a passive language, that is, understanding a language but not speaking it. You need to keep in mind that if your child already understands a language it is going to be easier to learn it later in school or as an adult, compared to someone who'd never heard it before.

In any event raising a bilingual or multilingual child can be a great challenge but with love and patience it can be a child's game!