How To Get Rid Of Ants, Safely And Pesticide Free

How Do You Get Rid Of Ants

Easy Ways That Work To Keep Ants Out Of Your House

Easy Way To Get Rid Of Ants

This method to get rid of ants works perfect with fire ants and the large black ants found in the deep south of the United States. It was taught to me by a lady from Mississippi who had a yard completely free of fire ant mounds while her neighbors yards were over run with the ants. Many laughed at her when she told them the cheap and easy way to get rid of the pesky little creatures.

Now that I have your attention I will reveal the pesticide free method to get rid of ants. Yes pesticide free. You know grits that southerns especially those in the deep south love to serve with everything well that is our secret ingredient in our Get Rid of Ants Formula. But you have to use the Instant Grits not the long cook grits.

You need a 2 pound bag or box of Instant Grits and a 1 pound bag of sugar. Mix your ingredients together in a large bag and your ready to go ant hunting. If you have fire ants in the yard go up to the ants mound and put about two heaping spoon fulls of your mixture directly on top of the mound. Check the mound in 2-3 days. If you still see any ants add another spoon of the mixture to the top of the mound. It will get rid of the ants like you won't believe. Believe it or not the mixture works and works very well. Just remember it must be the instant grits that you use. The long cook grits will not work. One company in Mississippi actually make the mixture up into red cakes by adding some red food coloring and sell it all over the deep south. They simply pour their mixture up into pans and let it set up and get hard and then cut it out in squares.

How Our Get Rid Of Ants Mixture Works

The Sugar is added for extra bait. Most all Ants love Sugar. And it attracts them well. So be sure to mix the sugar with the Instant Grits. It is after all their last meal. They will carry the Instant Grits down into the nest and feed the Queen Ant. When they do she will simply explode and the egg laying is over. The other ants will also eat the instant grits and will they will die shortly.

Hint For Very Dry Areas or Yards that are very dry.

Buy a large sponge at your Grocery Store and cut your sponge up into 1 inch squares. Soak your squares in water and drop one square onto the top of each mound where you have put your mixture. It will speed the exploding ants along and will get rid of the ants even quicker. You can then pick up your sponge squares and either discard them or save to reuse.

My friend from Mississippi who taught me this method to get rid of ants waits until an afternoon thunderstorm has gone by and then she treats any new fire ant mound with her ant killing method. With in 2-3 days that ant mound is dead and free of ants.

Get Rid Of Ants, Ants, Ants Recipe, Use This Recipe To Get Rid Of Every Ant In Your House.

Fire Ants Are Not Friendly

Some Fire Ant Facts And Other Information

Fire ants, sometimes referred to as simply red ants, are stinging ants of which there are over 280 species worldwide.

The bodies of fire ants, like all insects' bodies, are broken up into three sections: the head, the thorax, and the abdomen, with three pairs of legs and a pair of antennae. Fire ants can be distinguished from other ants by their copper brown head and body with a darker abdomen. The worker ants are blackish to reddish, and their size varies from 3 mm to 6 mm (0.12 in to 0.24 in). These different sizes of the ants can all exist in the same nest. In Australia, detection and identification in order to deliver eradication of the tramp ant pest the red imported fire ant (S. invicta) is complicated in Queensland by its resemblance to another long-standing invasive species, the "coastal brown"

A typical fire ant colony produces large mounds in open areas, and feeds mostly on young plants, seeds, and sometimes crickets. Fire ants often attack small animals and can kill them. Unlike many other ants, which bite and then spray acid on the wound, fire ants only bite to get a grip and then sting (from the abdomen) and inject a toxic alkaloid venom (piperidine). For humans, this is a painful sting, which leaves a sensation similar to what one feels when he gets burned by fire — hence the name fire ant — and the aftereffects of the sting can be deadly to sensitive individuals. The venom is both insecticidal and antibiotic. Researchers have proposed that nurse workers will spray their brood to protect them from microorganisms.

Fire ants nest in the soil, often near moist areas, such as riverbanks, pond edges, watered lawns and highway edges. Usually the nest will not be visible as it will be built under objects such as timber, logs, rocks, paving, bricks, etc. If there is no cover for nesting, dome-shaped mounds will be constructed, but this is usually only found in open spaces such as fields, parks and lawns. These mounds can reach heights of 40 cm (15.7 in).

Colonies are founded by small groups of queens or single queens. Even if only one queen survives, within a month or so the colony can expand to thousands of individuals. Some colonies may be polygynous (having multiple queens per nest). It has been observed that a colony can have over 100 queens.

In the Klang Valley of Malaysia, fire ants build nests in leaves by folding the leaf sideways and downwards over itself, with the queen inside, and then excreting a sticky white substance with which they bond and seal the fold. The excretion is also used inside the folded leaf to cover the queen and the eggs, like a kind of translucent duvet. The ants guard the nest and fiercely attack intruders.

A queen is generally the largest individual in the colony. The primary function of the queen is reproduction; she may live for 6-7 years and produce up to 1500 eggs per day. Many fire ant colonies will have more than one queen (potentially over 100).

The male ant's only function is to mate with the queen and continue the species with his genes. Once mating, the males continue on with their search for another queen.

The workers are sterile females who build and repair the nest, care for the young, defend the nest, and feed both young and adult ants.

Ants Of All Types

Ants are eusocial insects of the family Formicidae and, along with the related families of wasps and bees, belong to the order Hymenoptera. They are a diverse group of more than 12,000 species, with a higher diversity in the tropics. They are known for their highly organized colonies and nests, which sometimes consist of millions of individuals. Individuals are divided into sub-fertile, and more commonly sterile, females ("workers"), fertile males ("drones"), and fertile females ("queens"). Colonies can occupy and use a wide area of land to support themselves. Ant colonies are sometimes described as superorganisms because the colony appears to operate as a unified entity.

Ants have colonized almost every landmass on Earth. The only places lacking indigenous ant species are Antarctica, Greenland, Iceland, parts of Polynesia, the Hawaiian Islands, and other remote or inhospitable islands. When all their individual contributions are added up, they may constitute up to 15 to 25% of the total terrestrial animal biomass.

To Keep Ants Out Of The House

To keep ants from entering the house (or anywhere else) sprinkle baby powder on entry points. The ants won't cross and it is safe around pets and children. Bonus, smells nice too!

Use a solution of water and bleach and spray entire path ants take, you have to lose the scent they follow. Keep a spray bottle of it handy and spray their paths into your house.

Some people use lemon water made by adding 1 tablespoon of lemon juice to 1 quart of water. Spray the ants paths into your house. 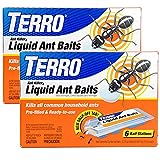