Over 100 Different Real "Eskimo" Words for Snow and Ice

The Little Miss Know It All book series is a favorite among children and teachers for its lessons in how to get along in life. It seems that the title character has escaped the books to send emails and newscasts of misinformation, as in:

Every winter, we hear falsehoods about the Inuit language and its perceptions of ice and snow.

Nonsense and Misunderstanding About Languages

Stuff and nonsense reigns! Attention seekers often publish disinformation for attention, and perhaps a good laugh on the public.

It is not enough that we have a lack of correct education in some of our schools. We must have proud anti-truth buffs at work. They are not Orson Welles who played a joke on the public with War of the Worlds. They actually believe that they are correct.

This is an interesting question, with various answers:.

What you'll find, until someone receives a grant to live among the Circumpolar Peoples around the top of earth for 10 years and record each word for snow, is that the Inuit-related peoples may have probably 60 different words for the delicate winter precipitation, but probably not 400 unique words.

Among Northern European, Asian, Alaskan, Canadian, and Greenland-area Inuits and relations that somehow deniers do not want to think are related, there may well be 100 words for snow, but we don't know for sure in the 2010s. No one is studying this topic through rips to earth's Arctic subpolar regions.

We have no such thing as an Eskimo on Earth.

The E-word is a term in the same slop bucket now as Red Man for a Native American and the N-word for African Americans. Eskimo Pie is a play-on-words ice cream treat and Red Man is unfortunately a brand of chewing tobacco.

The thing the world wants to know is "How many words do Inuit languages and dialects have for snow and ice?"

Inuit peoples have lived for centuries around the Arctic Circle, from the Bering Strait through Canada, parts of Alaska, Greenland, and even Iceland, as discovered in the 2000s. Close genetic and language-related peoples reside today in the Far North of Europe, Mongolia, and Siberia.

Snow no longer falls along part of the northern coast of Alaska, where the Native Alaskans and some Inuits are moving their village 40 miles inland to avoid the eroding shoreline (PBS; Smithsonian Channel, 2010 - 2015). In act, the dialects of these villages are disappearing and with them, some of the terms used for snow and ice.

In the late 2000s, NASA satellites recently discovered the Northwest Passage, opened by melted ice in northern Canada. There, too, native dialects are disappearing.

With disappearing snow, words for different types of snow may already have disappeared as well.

We must check all the dialects of Inuit and related languages around the top of the Earth, before deciding that there are only a dozen words for snow, ice, or both. Already found are at last 44 in the early 2010s.

"One develops a deeper understanding and appreciation for one of the biggest differences amongst Inuit just by listening to all the dialectal variations from Greenland, Sanikiluaq, Grise Fiord, Kangiqsuk, Arviat, Kugluktuk to Barrow, Alaska."-- Edna Elias. Dialects show Inuit language diversity; February 22, 2010 via Northern News Service.

Inuktikut Words for Snow and Ice

Lexeme: a basic language unit that consists of one word or of several words, considered as an abstract unit and applied to a family of words related by form or meaning. (Miriam-Webster Dictionary, 2017).

"ICE" in the same language:

In the mid-1980s, additional words for "snow" appeared in author Steven A. Jacobson's Yup'ik Eskimo Dictionary (1984). He is the person that lived among the Inuit for 20 years, but he found nowhere near 60 or 100 words.

Geoffrey Pullum published The Great Eskimo Vocabulary Hoax in 1991 to debunk the myth of "100 Eskimo words for snow."

Additional words and definitions for snow and ice were included in a comment by a researcher at SNOW WORDS (1979). These include: 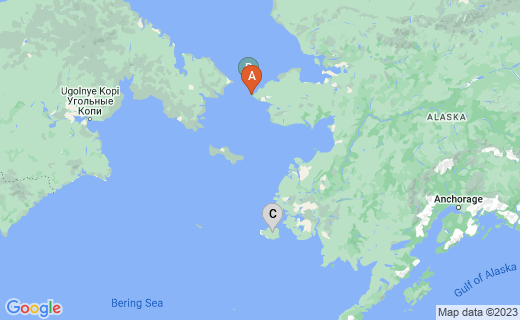 Living in an area that experiences various snowfalls for six to nine months a year, residents begin to notice differences and to name them.

Innuit Words for Snows in Alaska, Canada, and Greenland

These words come from dialects among:

Languages examined include at least the

Once we discard the word "Eskimo", which is either a Canadian Ojibway/Cree derogatory word, we find that the Inuit Nation has lived and continues to live around the top of the globe in the Arctic and Subarctic regions, as roughly depicted on the map below..

The problems with the word "Eskimo" is that it

Any living language is probably changing, even if that change is small and not noticeable to most people. We cannot write down every detail about a language, because we will never get it all. We need ongoing language observation, to which end Google began its Endangered Language Project to save 3,000 disappearing languages. 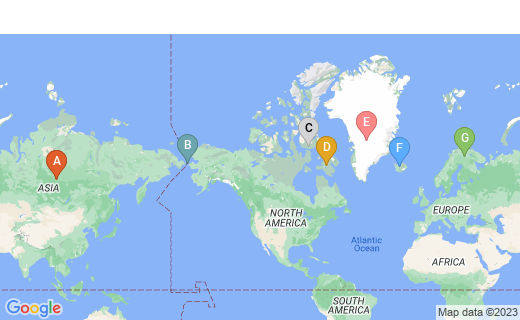 Examined by Franz Boas, father of anthropology circa 1880.

Boas only recorded a small fragment of the words available. At his time there would have been many more terms than there are today.