Irish Were Fleeing Ireland Long Before the Potato Famine

Most people equate the mid-nineteenth century potato famine with the coming of the Irish to the U.S.

While millions came as a result of that famine, they were by no means the first Irish to come to the U.S. Many came during colonial times.

The first St. Patrick's Day parade in what is now the U.S. was held in New York City on March 17, 1762 – fourteen years before America declared its independence.

Among the numerous Irish Americans to fight in the Revolutionary War were Commodore John Barry the Father of the American Navy and Major General John Sullivan who, with fellow General James Clinton, defeated a large force of British loyalists troops and their Iroquois allies thereby relieving a major threat to the frontier.

An Irishman in the Service of Spain

Unlike Barry and Sullivan, O'Conor's actions took place in Spanish Colonial America and he is known for his work in Spanish territories of Louisiana, Texas, New Mexico, Arizona and California.

Among other things he established the presidio (fort) at what is now Tucson and named the settlement San Agustin de Toixon, a name that was later shortened and modified to its present spelling of Tucson.

Hugh O'Conor was born in 1732 in Dublin, Ireland where his parents moved after his father, Daniel, found himself in trouble due to his anti-British political activities in the family's ancestral home in Roscommon in Connacht.

As descendants of Turlough Mor O'Conor, the High King of Ireland who died in 1156, the O'Conor family's political sympathies were not with the British who ruled Ireland at that time.

The family's Irish politics and Roman Catholic religion effectively precluded any type of future for Hugh in Ireland.

Like many other Irish aristocrats of that period, the sixteen year-old Hugh slipped out of Ireland in 1750 and made his way to Spain where his cousins Alexander and Dominick O'Reilly were serving as officers in the army of the King of Spain.

In addition to his cousins, Hugh's grandfather, Daniel, had been an officer in the Spanish Army in an earlier era and his Uncle Thomas, had been a general in the army of the King of France.

In Spain, Hugh joined his cousin Alexander O'Reilly, by then a Lieutenant Colonel, who obtained a cadet commission for Hugh in Irish Hibernia Regiment of the Spanish Army.

During the Seven Years' War (1756 – 1763 and also known as the French and Indian War in the U.S.) O'Conor served under Reilly as they fought together during Spain's invasion of England's ally, Portugal.

Following the campaign against Portugal, O'Reilly, now a Field Marshall, was sent to Cuba where, at O'Reilly's request, O'Conor joined him as an officer on his staff in 1763.

The regiment O'Conor served with in Cuba was The Regiment of the Volunteers of Aragon and he quickly rose through the ranks to become Sergeant Major, the third highest rank in the regiment.

O'Conor, now known as Don Hugo O'Conor, was also inducted into the Knights of Calatrava which was one of only three orders of knighthood in the Spanish army. This was a very high honor, especially for an outsider like O'Conor.

In 1765 O'Conor was promoted to the rank of Major and transferred from Cuba to Mexico where he became part of the administration of Spain's North American colonies.

Two years later in 1767 he was sent to Texas to investigate reports of corruption in the Texas colonial administration. Upon arriving in Texas he soon found evidence of the rumored corruption on the part of both the current governor Martos y Navarrete and Navarrete's predecessor Barrios.

After receiving O'Conor's reports, Martos y Navarrete was recalled to Mexico City to defend his actions and O'Conor was appointed acting governor of Texas.

As acting governor of Texas, O'Conor, who was given the nickname of El Capitán Colorado (the Red Captain) by the locals because of his flowing red hair, was kept busy both managing the affairs of the province and defending it against raids by Comanches and other hostile tribes along its borders. 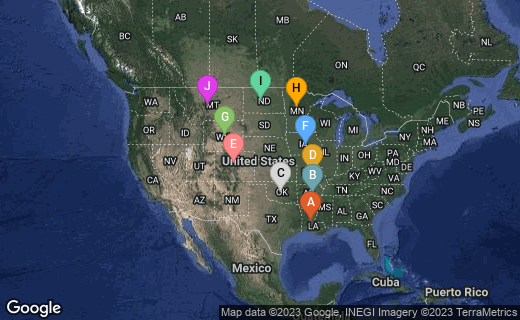 Complicating the defense problem was the arms trade between the Indians and French traders in neighboring Louisiana.

At the end of the Seven Year's War in 1763 England had emerged as the clear winner and France the loser. France lost Canada to England and gave up its claims on the frontier between the Appalachian mountains and the Mississippi River.

With the loss of Canada and its wealth of fur, France had little use for the Mississippi Valley with its small trading post at St. Louis (Missouri) and the port city of New Orleans.

No longer having any use for the territory, France gave its Mississippi valley territories and New Orleans (the territory that was later purchased by the United States in 1803 and known as the Louisiana Purchase) to Spain which had been its ally in the ill fated Seven Years War.

With the Louisiana territory now a part of Spain it should have been easy to solve the problem of the gun trade. However, while Spain now ruled Louisiana, the population was still French and the gun trade involved more than just profits.

French policy in Louisiana had been to allow the gun trade as a means of buying peace from the neighboring Indians So long as the Indians used the guns to attack the neighboring Spanish colonies the trade made both economic and military sense.

By turning a blind eye to the gun trade he was merely letting the Indian raids remain a Texas problem rather than having it become his problem.

As a result, Texas Governor O'Conor was forced to use his formative military skills to defend his colony while pleading in vain to the Governor of Louisiana and the authorities in Mexico City to eliminate the gun trade which was the root of the problem.

Shortly after, O'Conor's cousin, Alexander O'Reilly was made governor of the Louisiana territory.

While O'Conor was given another assignment soon after his cousin's appointment which precluded him from working with O'Reilly to halt the gun trade, there was a period of a few months when these two cousins from Ireland governed a major portion of what is now the western half of the United States.

Looking at the map above and, when you include Texas, you can see that the part of present day United States governed by these two cousins was larger than the original Thirteen Colonies that made up colonial America at that time.

Spain Fears Her Colonies Will Be Invaded by Russia or Britain

While O'Conor was occupied with managing the affairs of Texas and maintaining order on its frontier, King Charles III of Spain became concerned about the northern frontier of his North American territories.

Of special concern was Russian expansion in California. The Russians had been engaged in the fur trade in Alaska and had done some exploring by sea as far south as Northern California.

While no permanent settlements had been established there was concern that the Russians could begin to encroach on the sparsely settled northern frontier of the Spanish territories.

Also of concern were the future plans of the British who now controlled Eastern Canada and Hudson's Bay as well as defense against growing attacks by Apache and other warlike tribes against the silver mining and farming communities that bordered the frontier.

As a result of these concerns for New Spain's northern frontier, King Charles III ordered Field Marshal Marqués de Rubi to do an inspection tour of the entire frontier from the Gulf of Mexico to California and report his findings to the Viceroy.

De Rubi made his inspection in 1766 – 1767 and recommended that a new series of forts be built along the northern border of Spain’s North American possessions stretching from the Pacific Ocean to the Gulf of Mexico.

According to de Rubi, the current defenses for the area were designed to meet local defense needs against Indian attacks. The new forts were needed to form a shield across the northern border against attacks against Spain’s North American possessions by rival European powers and protection of mines and other Spanish economic interests by hostile Indian raids.

In September of 1772, O'Conor was commissioned by the King of Spain to implement the recommendations made by de Rubi for the strengthening of the defenses of the northern border of New Spain.

By 1775, O'Conor reached the area that is now Arizona and had the garrison at Tubac move north to the present site of Tucson and establish a presidio (fort) just north of the mission of San Xavier Del Bac.

Tucson thus replaced Tubac as the northernmost position point of defense of this territory.

O'Conor did not linger in Tucson but quickly returned to the field.

With a large Spanish force under his command, he spent the next few years fighting the Apache and Comanche tribes who were attacking the area along the vast northern boundary of New Spain.

When his health began to fail in 1777, Hugo O'Conor asked to be relieved of his command.

The request was granted but, instead of retirement, he was promoted to Brigadier General and appointed Governor of Spain's Yucatán province in Mexico. On March 9, 1779, at the age of 45, Hugo O'Conor died at Quinta de Miraflores just east of the city of Merida in the Yucatán.

Buried in the Yucatán where he died, Hugh O'Conor, like many of his fellow countrymen, helped build a new world for a foreign monarch and now rests in this new land far from his birthplace in Ireland. 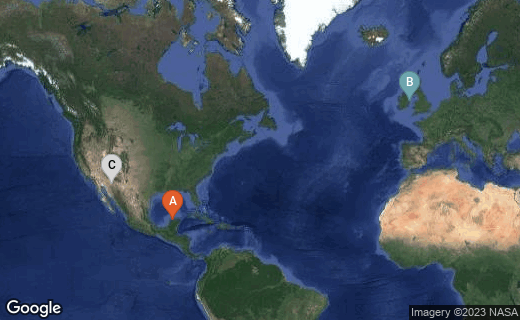 City of Merida in the Yucatan in Mexico where Hugo O'Conor died in 1779.

Dublin, Ireland where Hugo O'Connor was born in 1732

Tucson, Arizona which was founded by O'Conor in 1775