"I Don't Want To Go To Counseling"

Have you ever been at a loss for words when talking to a friend about a life issue they are battling with? At one time, we are all put in the position as "counselor" and helper to someone. We know that listening is crucial and giving reassurance is helpful, but what else can, or should, we do? Maybe the person needs professional help; a counselor.

I can't count how many times I've heard the phrase, "I don't want to go to counseling", especially in the last 3 months. Believe it or not, it has something to do with the fact I've often been told I can sell ice to an Eskimo. Although I never thought of myself as a salesperson until a few months ago. Let me explain...

My husband works at The Veteran's Hospital in the city. He is a vet himself- ex-Marine, injured serious enough to be discharged from the military. I met him years after all of this, but I came into his life just in time to witness the after effects of his arthritis at age 38, 5 knee surgeries, and a reocurring issue with depression and sleep disturbances. He never realized how his "traumas" had effected every area of his life until I pointed this out; in a gentle, loving, wifely way of course- OK, most of the time.

About a year after he began working for the Veterans Hospital, he made friends with several people and word got around that I have a Psychology degree. No big deal really- A Psychology Degree is minimal compared to what most counselors have. How could I possibly help anyone when I have yet to get my own life in order? I have this view of being perfect in order to help others and since I've never reached that unattainable goal, I've never pursued the counseling gig all the way. Unless you count the numerous times I listened to the woes of others while bartending.

My unofficial nonprofessional counseling job came about casually and unexpected. It all started when an intern at my husband's job was having family and boyfriend issues so he suggested she talk to me. I talked to her for a few hours one day and ongoing every once in a while for a few months. Next, a young guy heard through her about me and said he wanted to talk to me. Suddenly his friend and that friend's girlfriend wanted to talk to me together. This growing list of people I was talking to had one thing in common; they didn't want to see a counselor.

When I asked why they didn't want to see a counselor, the answer was "because I don't need help" or "I can deal with this myself". I didn't bother pointing out the obvious that they were talking to a stranger (me) about private issues. But something turns people off from seeking counseling. I know the feeling, I've been there too. Suddenly it occurred to me, as a non-counselor I may be able to help people more.

Saleswoman of the year!

In the last 3 months I've "counseled" 2 individuals and 1 couple, believe it or not, on some lawn chairs in my yard and/or garage. I guess subconsciously I was trying to convey the opposite of a typical stuffy counseling office. Either that, or I had no idea what I was doing and was merely trying to make myself comfortable.

All they wanted was someone to talk to. Although, while I'm listening to their stories, I'm thinking they really need to seek counseling, but they all had an aversion to therapy. I had to change their mind sensitively.

Some of the stories I heard concerned indecision about an abortion, experiences in Iraq while deployed (war), recovering from severe car accident, divorce, and many more traumatic revelations. All of them were either in the military or recently discharged. In other words, I was out of my league, never being in the military and knowing these issues were serious. But somehow I persevered triumphantly and found all my life experiences and schooling working hard for me as I sold ice to Eskimos.

First, I addressed the counseling stigma, especially with the guys. I told them I knew exactly how they felt about counseling. When my parents divorced, my mom wanted me to go to counseling, but I had absolutely no interest. I avoided counseling until I went to school for my Psychology Degree. I started having a different opinion about counseling and having more knowledge about how to pick the right one for me. I also realized admitting my weaknesses made me stronger. Facing my problems, instead of hiding proved courage. Working through issues sooner than later made for a richer life ahead.

This is the way I explained counseling, in other words, my sales pitch;

"You fill your car with gas because it will run more efficiently and it certainly beats pushing it by yourself. You take an aspirin because you know eventually you'll get over that headache, but the aspirin will speed up the process. You have problems. You may eventually work through them by yourself, possibly by the time you are 50+ years old (they were all in their 20's). If you decide to go this route then you will have lost a good amount of your life approaching and enjoying people and experiences differently than if you didn't have a residual effect from the issues plaguing you now. People who go to counseling want to get more out of life. It's a fast-paced world and honestly, who wants to spend a lifetime overcoming issues from our early years when we can face them immediately with help."

Putting this into military terms they would relate to:

"A good counselor helps you help yourself. Your independence isn't taken away. You are made stronger, not weaker. Any man/woman knows, it is better to have a trained army then go into battle by yourself untrained." I probably mentioned things about courage and other analogies. I got them to laugh, talk freely, and feel understood. Two of them now see a counselor at the Veteran's Hospital.

The stigma of counseling

The humorous side of me enjoys this quote;"Psychotherapy is a discussion between two people one of whom is slightly less anxious than the other." Irving Yalom.

After talking to these people, whom I had never met before, it helped me understand how counseling works, at least in theory. We often get reaffirmed by our friends and family about how we are dealing with an issue. They are biased and can't possibly look onto us separated from the situation- they are personally invested and involved. The counselor is an objective coach and mediator; someone who knows us better than ourselves because of that position. If you trust a doctor to help your body, then why wouldn't you trust a counselor to help your mind?

An interesting website www.myshrink.com states, "You don’t have to be crazy, maladjusted, weird or uncool to go to counseling." But why do so many people avoid therapy? One thought is it's our last place of freedom. Literally everything can be stripped away from us except our thoughts. It may feel like an invasion of privacy. It may be the stranger aspect as I mentioned above. Also, how many times do we hear jokes concerning psychologists? or negative media?

Would you rather see a Life Coach? Many would. Their popularity is overwhelming in recent years because the term sounds significantly better than psychotherapist, right? Whoever coined the term was a genius. Of course I'd rather see a Life Coach! That sounds cool. But essentially counselors/therapists have more training and likely to be covered by your health insurance. 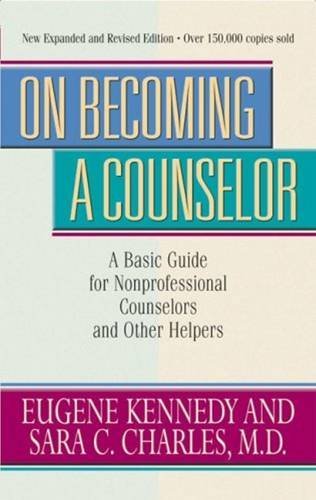 On Becoming a Counselor: A Basic Guide for Nonprofessional Counselors and Other Helpers
Buy Now

On Becoming a Counselor

I read a great book, before I went to school for my Psychology Degree. It is titled "On Becoming a Counselor; A Basic Guide for Nonprofessional Counselors". Whether we like it or not, We will find ourselves in this situation and this book offers helpful tips in laymens terms. In fact, it summarizes what can be found in textbooks, but is essentially hard-bought wisdom.

Helping others is simple if you remember humanity is too ordinary to be considered impressive, yet extremely effective in this context. That is the ease and distinction of a good helper.

Therapy for your inner child