Iga & Koga: Homelands of Ninjutsu and the Ninja

The Iga Province and the southern area of Omi Province, known as Koga, are today associated with the origins of ninjutsu and the ninja. According to archaeological evidence the declaration of Iga and Koga to be the cradles of ninjutsu seems to stand on firm grounds. In Go kagami furoku we read:

"There was a retainer of the family of Kawai Aki-no-kami of Iga, of pre-eminent skill in shinobi, and consequently for generations the name of people from Iga became established. Another tradition grew in Koga."

The development of the art of ninjutsu, that is, expertise in certain secret skills and techniques, didn't respect provincial boundaries and so it is not surprising that the inhabitants of both Iga and Koga, area that shared a common border, were involved in the development of what later became known as ninjutsu. Ninjutsu thrived in both provinces until they was razed by Oda Nobunaga in 1581.

A quick look at a map of medieval Japan gives the observer a clue as to why Iga and Koga provinces could be ideal places to produce a bunch of liberal-minded clans possessing such military skills that they could hire themselves out as highly competent mercenaries to carry out various fairly complex tasks for others.

The Iga-Koga area in Japan 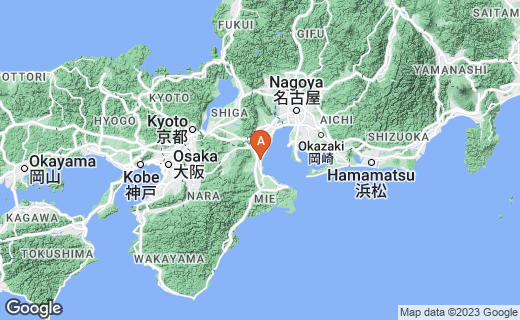 The Topography of the Iga-Koga Area

An Ideal Place for Ninjutsu to thrive

Iga Province (now the north-western part of Mie Prefecture) was situated in an entirely landlocked area, with the whole length of its borders following the tops of high mountain ranges. The villages built on the inside plains were engulfed by a circle of natural defences, breached only here and there by steep mountain passages.

The north side of the Iga Provice, not everywhere protected by mountains, was where it bordered Koga, the southern region of Omi Province. It was a situation similar to that of contemporary Switzerland, where mountain ranges provided such a good natural protection that the infamous inhabitants of the region could serve as mercenaries of Europe.

Iga was a politically very sensitive area. It lay exactly to the south of the neck of the country, the narrow land-strip between the Bay of Owari and lake Biwa that cut medieval Japan in two halves. Kyoto, the capital of Japan, lay at the mouth of Lake Biwa, and it was where the two main highways running to the east, the Tokaido and the Nakasendo, started.

The two highways were actually one and the same as far as Kusatsu, with the Tokaido then heading for the sea on the coast of Ise Province, touching north of Iga Province by the Suzuka Pass to then run along the Pacific coast. The Nakasendo headed north-east along the edge of Lake Biwa through the 'Japan Alps' to run into the Tokaido near modern Tokyo.

Political Situation of Iga and Koga

The Iga Province and the Koga region together were a natural crossing between the primary trade routes from Kyoto and the mountain ranges of the Kii Peninsula to the south. Nested in these mountains were villages totally isolated from the outside worlds with inhabitants living their entire life without ever coming in contact with the rest of Japan. They were often terrorized by bandits operating along the Tokaido or by pirates marauding the sea coast of nearby Ise Province.

Many of the ninja legends, including that of the legendary outcast samurai Ishikawa Goemon, well-versed in the art of ninjutsu, have their origin in the exaggerated accounts of the exploits of mythical gangs of robbers.

Archaeological finds from the fortifications of Koga suggest active military presence from the time of the Sengoku Period, when most of the twenty-one hilltop castles of the region were erected. The many clans who ruled various parts of the mountains of Iga and Koga were allied in a fairly complex hierarchy of mutual support, creating optimal conditions for mercenary activity to thrive.

The Wada clan, for instance, ruled a chain of mountain-top fortifications along a river valley, and Wada Koremasa (1536-83) had sufficiently power and influence in Koga to provide refuge for the future shogun Ashikaga Yoshiaki after his brother Ashikaga Yoshiteru killed himself in 1565.

More on Ninjas and Ninjutsu