When Richard Trevithick (1771-1833) created the first steam locomotive in 1801. He just wanted to move some coal from one place to another. He probably had no idea that his invention would change the world we live in and lead to the industrial revolution.

In fact he gave up on this world class innovation and became interested in other things. He went on to develop a steam powered car, amongst many other interesting inventions.

Trevithick's genius was to put a steam engine on wheels.

Putting a steam engine on wheels seems like such an obvious thing to do, to us today, but it wasn't always like that. This radical technological innovation was a very long time coming.

As a technology, the functional steam engine, had been around for over 125 years (Denis Papin's Digester or pressure cooker of 1679) before someone had the bright idea to mount it on some wheels.

Think about that, 125 years passed, before someone thought to put it on wheels. Not exactly a speedy transition by today's standards, where products are obsolete before they even leave the drawing board let alone the factory.

If we look at modern vehicles compared to early steam vehicles.

We see that the fuel may have changed and today we have better brakes, but these early vehicles had wheels on four corners and they have the familiar shape of an even earlier form of transport. (A coach or wagon)

It 'looks' like a vehicle. Although early machines were not designed to carry passengers. The wheels were added to move the engine to where it was required to work.

The familiarity of the shape or form of this early wheeled steam engine, and all modern vehicles then, is historical and practical. Four wheels on four corners makes sense.

The leap from static engines sitting in mines pumping out water. To putting them on a set of wheels and making them mobile. Took a lot of imagination, many decades and numerous innovations.

The idea of using steam as a source of power is a very old idea indeed and there are records dating back over 2000 years, to an early device that was used as an entertainment by the Romans.

Imagine where our technology would be today, if the Romans had figured out how to harness steam power.

The Romans actually invented a form of 'jet engine' using steam. circa 100 BC. It doesn't seem to have had any practical use other than as an entertaining novelty.

It is amazing to think that the Romans, did not make the connection with this 'toy' that they had made, and that it could be used for some other practical purpose.

After all they gave us the aqueduct, water mills, central heating and a multitude of useful inventions, and yet steam power was lost on them!

1700 years later, Industrial inventions in steam led to mobile power, mass production and the industrial revolution in the UK. For the first time we could take the power wherever we wanted.

It may be hard for us to imagine what life was like, prior to this ingenious harnessing of steam power. There were only a few ways to get power. Wind, water, human or horsepower.

If you wanted to build a mill, it had to be located in terrain to take advantage of local streams, that could be harnessed to drive water wheels. Hilly areas predominately. Or on flat lands where wind power could be utilized to drive windmills.

The only other form of power readily available were horses or human muscle power.

The invention of the steam engine freed people to locate to a much wider range of areas.As long as there was a ready source of coal or timber.

Many of the first industrial towns combined all these elements. It is no coincidence that coal and iron manufacturing areas were also the birthplace of the steam engine.

Early steam engines were used to pump water from coal mines. They had little in the way of safety features and often would explode killing anyone nearby.

Putting the engine on a set of wheels and making it a mobile form of power, for transportation of goods and later people, took a further 106 years.

In many cases the wheels were only added to get the steam engine from one field to another. i.e to run a threshing machine, as seen in the video below.

It was many years again before someone realized that this could in fact replace horse power for moving goods around. And much later again as transportation for people.

There were a series of inventions and innovations along the way, that led to the development of the modern steam engine.

Robert Boyle (25 January 1627 – 31 December 1691) developed a theory on the behavior of gasses under varying pressures. This is Boyles Law.

The mathematical equation for Boyle's law is:

p denotes the pressure of the system.

V denotes the volume of the gas.

k is a constant value representative of the pressure and volume of the system.

The next problem. How to turn this new knowledge from the above equation into a working machine to solve the following problem. i.e. removing excess water In mines

Savery patented his first crude steam engine in 1698. This was based on and earlier design by Denis Papin. The Digester or pressure cooker of 1679.

The Digester pre-dates Boyles Law, and had a tendency to explode quite often until people began to understand Boyle's ideas and applied their new understanding of the expansion of gasses which led to the development of a steam release valve. Another crucial step on the road to a successful locomotive.

Savery had been trying to solve the problem of excess water in coal mines. His machine worked by creating a vacuum; which sucked water out of the mine shaft. By all accounts It was pretty inefficient and was also prone to explosion.

In 1712 Newcomens steam engines were known as 'fire engines' or 'atmospheric engines'. They worked primarily from a fire, heating water in a chamber, and by atmospheric pressure pushing a piston into the vacuum caused by condensing steam.

Cold water was poured over the hot steam condensing chamber so dropping the temperature and creating this vacuum. As we know:-

Trevithick. abandoned the condensing stage altogether, and pursued steam under pressure. He realized that earlier machines had suffered from poor materials, weak metals and pipe joints. They just could not handle the pressures and heat generated.

Trevithick's 1797 machine was known as the ''puffer', because of the puffing sound it made in operation. By 21st February 1804, he had built a small steam locomotive, running on formerly horse drawn tram tracks in Penydarren ironwork's, South Wales.

Although many people were thinking about steam locomotion. It is Richard Trevithick who invented the first fully functional steam locomotive.

It was a commercial success briefly, However the engine was so heavy that the rails could not contain it. It often broke the tracks of left them altogether. Amazing as it may seem. He abandoned the whole steam locomotive concept and moved on to other projects.

How did a poor, illiterate, coal mining worker, develop the first commercially successful steam locomotive? He was intelligent, diligent and he knew the value of learning from other people's good ideas. Why make the same mistakes, others have made, when it is easier to study and so avoid those errors.

By the year 1813, George Stephenson knew there was a need to develop an efficient way to keep the coal mines free from flooding and excess water, and to transport the spoil and coal in and around the mine and local area.

He would have known about the current ideas and engines in use. He also knew that others were designing locomotives for this purpose.

Stephenson must have felt that he could do better and began the construction of his first locomotive. With the help of his assistant John Thorswall, a fellow worker at the coal mine who was also a blacksmith.

Stephenson's locomotive "The Blucher" first ran on the Cillingwood Railway on July 25, 1814. The track was four hundred and fifty feet long and uphill. The railway had been in use for many years and the motive power had been horses.

Stephenson's engine pulled eight loaded wagons of coal, total weight thirty tons. At a speed of approximately four miles per hour. This early success encouraged Stevenson to pursue further refinements and he went on to build many more steam engines.

The most famous being The Rocket.

Initially the Rocket was not much faster than earlier models until George noticed steam blasting out of the pistons. He added some pipes to capture this 'spent' steam and directed it into the smokestack.

This had the effect of making the engine draw more air into the firebox and burn more fiercely. The result was astonishing. More heat produces more steam in the same size boiler.

More steam pressure equals more speed. It could be seen as an early form of turbo charger. This one innovation almost trebled the speed of the Rocket.

In 1825 Stephenson build the Stockton and Darlington railway. The first ever complete steam engine powered, railway system. He then went on to build the Liverpool to Manchester railway in 1830.

The early steam engines were built with rudimentary knowledge. Although Boyles Law may have been known to some, it wasn't until may years later, that the physics of how they actually operated was fully understood. 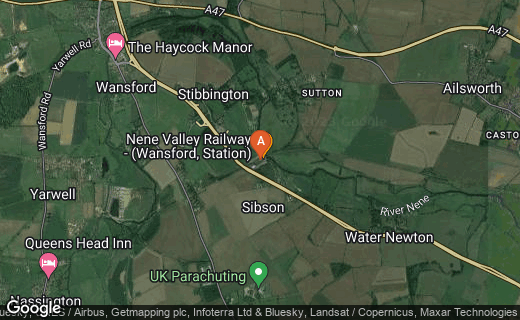 Many people today, believe that the age of steam was killed off prematurely, and that they were dispatched with undue haste in the mid 1960's.

Newer industrial inventions, namely the Diesel Engine as seen in the video below, seemed like the way forward. Many British steam engines were sold for scrap.

The gentleman that owned the scrap yard had so many engines and carriages to scrap that luckily he started dismantling the carriages first.

He had not had the time to cut the engines up, before a group of steam railway enthusiasts sought him out, and asked to buy them back. It is often the case that enthusiasts lead the way.

The swift action of this small group of people means that today, many of the surviving trains are safe and running on privately owned railways, catering to the tourist trade.

In total, the scrap yard owner had over 200 locomotives.

They are now back in use on the various private lines around Great Britain. It is great to be able to see these amazing trains from a bygone era.

To answer the question. Who invented the steam locomotive, and who first had the idea to put wheels onto steam engines, as we have seen above is complex and had many contributors.

I wonder where would we be if the Romans had figured out how to use steam power 2,000 years ago?

The age of steam is still far from over.

Mallard is still the fastest steam engine in the world