Influence of Nazi rocket Technology on US space exploration

The 20th century as seen by some, was perhaps the most murderous and evil century thus far in history. Unfortunately the beginning of the 21st century is not starting off any better. Out of the 20th century period came the horrors of murder and torture on an assembly line scale in concentration camps and nuclear war delivered by long range intercontinental rockets. The rockets that we use today for warfare, nuclear threats and the space program had their birth in part at least from the Nazi rocket program at Peenemunde and Mittlewerk. It is true the Goddard was the father of American rocketry, but it took the advances made in the V-1 and V-2 rockets under Warnher von Braun within Nazi domination. After the Nazi defeat in WWII, the knowledge gained was spirited to the US under the CIA's Operation Paperclip via the Vatican “Rat-line” that gave the US space program and war department its shot in the arm. The same was true for the Soviet Space program, but the Soviets managed only to obtain a handful of lesser scientists. Both got advances from the Nazis. The Soviets in their drive under Stalin, managed to develop from lesser talents, the first successful launches into space, including manned flight, the first spacewalk and the first orbiting space station Salyut (1971). The US, despite their appropriated greater rocket science talent resources had fast catching up to do from Oct. 4th, 1957 on and finally by 1969, placed the first man on the moon. There is some speculation that the USSR was ready at the same time, but due to problems on the launch pad, failed to make their bid to the moon. They gave that up, turning to planetary probes instead.

There is another sinister side to the rocket program that sent man to the moon and helped to ultimately build the International Space Station (I.S.S.). The “ideal” was set in Peenemüende-Mittelwerk where enslaved Jews and others like Poles and Russians were not paid, fed or clothed and were worked around the clock at gunpoint until they dropped dead of exhaustion at the work site. To set the incentive, several public hangings took place every day. The starved to death slaves were removed and more took their place, supplied from concentration camps like Dora close by and Berger-Belsen where actual signed documents by Warnher von Braun surfaced after the war. This is how the V-1 and V-2 rockets were developed that rained terror upon Britain and eventually took the US to the moon on their successors, the Saturn 5. Even the Proton Soviet rocket science advanced on Peenemüende-Mittelwerk. Parallel with this were developments in the rest of Nazi occupied Europe offering other technologies.

“Mass production of the V-2 took place at an underground factory known as Mittelwerk, an offshoot of the notorious Dora concentration camp. Slave laborers brought from as far away as Auschwitz toiled in the dank, freezing tunnels and workshops under the brutal direction of the SS. Thousands of these laborers, Jews, political dissidents, prisoners of war, and others died from disease, starvation and abuse at Mittelwerk. Others were executed, often publicly, as suspected saboteurs. While the details about his activities in the Nazi Party are vague, it is known that von Braun became a member in 1937, and held an honorary rank in the SS.

Established in the summer of 1945, a top-secret project known as Operation Overcast called for the capture of von Braun and hundreds of his colleagues from Peenemünde and elsewhere for purposes of "temporary military exploitation." Of the 350 German scientists mentioned by name in the order, 100 were the so-called "rocket-men," whose pioneering work had resulted in the development and deployment of the V-2. Along with the scientists and technicians themselves, components for 100 of the V-2s were shipped to the United States.

Von Braun, who died in 1977 (from old age and natural causes), would eventually become a hero to many for enabling the United States to beat Russia to put a man on the moon. But his legacy includes the production of V-2 rockets with the help of Russian, French and Polish prisoners of war working under deplorable conditions, Neufeld said. About 10,000 of the prisoners died of malnutrition and disease.…

Rockets were developed in Peenemunde 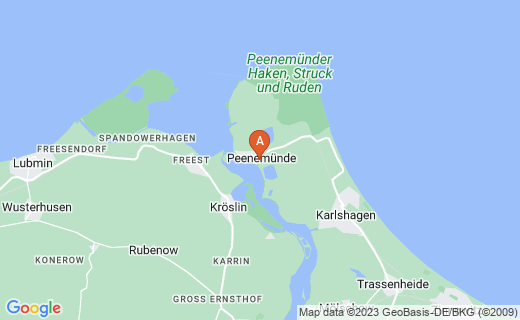 This is the historic location of the V1 and V2 Rocket development facilities of Nazi Germany. Our modern space program was born here.

Von Braun's complicity in Nazi atrocities is less clear, Neufeld said. But there is at least one document a letter in which von Braun discusses a trip to the Buchenwald concentration camp, where he apparently spoke to the commandant about obtaining more skilled laborers to use at Mittelwerk.

Everyday 5-6 people were hung in front of the NAZI underground rocket factory in central Germany, Arthur Rudolph was manager of the factory and signed most of these slaves execution orders. After the war he became the head of Rocket building for NASA. This is all true and now a matter of history. Our film also features a slave who survived the Nazi factory and witnessed Von Braun boasting how they were going to bomb New York with his rocket. There were 34,000 engineering changes to the V-2 rocket during the last year of the war, this means that all these scientists and engineers were at the rocket factory. No one tried to slow down production or make any attempt to save the lives of the slowly starving slaves. Von Braun was no Schindler; he was a cold hearted Nazi who got lucky and never stood trial because of his rocket knowledge. Even today his background is still unknown to many." (1)

Sources for all this information can be found in the Department of Justice of the US and within excerpts from the Smithsonian Institute. Warnher von Braun became a household word and something of a hero in the early days of the space race, despite the fact that the US initially lagged behind the USSR. The launch of the Sputnik on a modified version of the V-2 placed the first artificial man-made satellite in orbit around the Earth. The Sputnik was a simple device designed to emit a regular pulsed radio signal to proclaim to anyone listening that the USSR was the first in space.

The US government was surprised by the coup and ordered an immediate speed up of a US based program that was thought to be under little threat. The initial idea was a "go slow" approach as they thought there was little threat. Besides, the initial success of nuclear war over Japan in 1945 was thought to be a sufficient deterrent. The implication that the USSR could now deliver a hydrogen bomb to Washington DC from space in less than 30 minutes was a frightening prospect. The US wanted to be ready with a rocket capable of delivering nuclear Armageddon to Moscow. Initial attempts to launch a counter satellite to Sputnik failed miserably with rockets exploding on the launch pad or aborted in flight due to malfunctions. It took the US Space Agency NASA, up to Feb. 1st, 1958 to successfully launch a satellite. Both the US and USSR launched moon probes in 1959, with the Russians being successful in returning photos of the Moon's far side. All US probes failed, either missing their target entirely, or crashing. In 1961, Yuri Gagarin was the first Russian astronaut in space. The US sent Alan Shepard a month later in a sub-orbital flight.

The mighty Saturn 5 rocket, the brainchild of Warhner von Braun was the chosen launch vehicle that was used in the Apollo program that placed Neil Armstrong on the Moon on July 20th, 1969. There were several more successful moon shots up until May 14, 1973 when the program was retired. Delta rockets were used to launch probes thereafter. It took until 1981 to get US astronauts back into space with the Space Shuttle. Meanwhile, the USSR continued manned space flight, experiments and long duration space station experiments.

All of Warhner von Braun's rockets were liquid fuel chemical rockets, including the Saturn 5 and hydrogen propelled rockets. Solid rocket fuel was developed independently by a different research team working under NASA. Up until the advent of the Space Shuttle, all astronauts, most planetary probes and most satellites launched by the US and USSR were founded on designs heavily influenced by Nazi research under Warhner von Braun. The early work of Goddard paled when compared to the development of the V-1 and V-2 which were the foundations of all heavy lift vehicles.

China is now entering the space race with the recent launch and return of astronauts in Sept-Oct of 2008. The rockets they have built are almost entirely from their own research. In the past, it was China that invented the solid fuel rocket with the use of fire works and black powder. China has not benefited from nor used much in the way of Nazi rocket science.

1. The Nazi Rocketeers Dreams of Space and Crimes of War by Dennis Piszkwiewitz, 1995

the Nazis developed rockets and other technology. 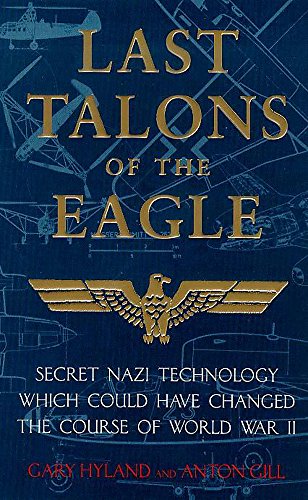 Last Talons of the Eagle: Secret Nazi Technology Which Could Have Changed the Course of World War II
There are many ways that WWII could have turned out differently if for instance, Himmler had ordered the mass building of jet aircraft. In addition, the Nazis were experimenting with levitation technology and other still suppressed ideas. Had any one of them had been pursued with vigor, the Nazis might have won the war.
Buy Now