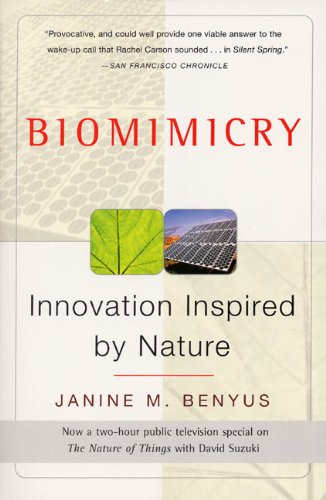 I don’t know about you but I have frequently been inspired by the pets that I have had around me. I remember one experience when I was pacing around my house while having an angry phone conversation. I tripped over my dog who was lying on the living room floor and I almost started to yell at her. However, she looked at me with these big brown eyes like she was simultaneously asking “why did you step on me?” and “it’s okay, I forgive you” and I stopped feeling angry about anything at all. She inspired me to just calm down and realize that it wasn’t a big deal. And I find that I learn similar things from my pets every time I take the time to actually just sit and watch the way that they move through their worlds.

Imagine, then, being a scientist or inventor and turning your eyes towards the wider world of animals. Think of all of the different animals that are out there and consider the things that we might learn from them. In addition to the social and emotional things that may be inspired by watching animals, we may actually find that concrete physical inventions can come about from watching the animals of the world. Humans may like to think that we’re the best species on this planet but the truth is that there are some things that animals just naturally do way cooler than us.

Luckily, some inventors have paid close attention to the animal world and have worked to create things that help us to take what they’ve learned from animals and use it to improve our own lives. Here’s a look at some of the inventions that were inspired by animals:

·        Prosthetics. You might think that we would turn to the human anatomy to create the fake arms and legs used by people who lost their limbs but the truth is that we had to turn to the animal world to get a better grasp on how to create the most useful new prosthetics. One report says that cheetahs were the inspiration behind the “flex foot” which helps people who have lost their lower legs to be able to get mobile again.

·        Ultracane. Animals have also been a great help to those people who haven’t lost limbs but who have some trouble getting around for another reason. Specifically, the echolocation that bats use has been implemented into the design of a unique modern cane for the visually impaired called the Ultracane. Ultrasonic echoes are detected by the cane in the same way as they are detected by bats so that those people without sight can get around without running into walls in the same manner that bats fly around in the dark.

·        Stronger, more lightweight materials. Science News for Kids points out that the conch shell has been a source of inspiration for scientists who are seeking to find a way to create a material that is lightweight but not prone to breakage. That’s because the conch, a snail-like creature found in salt water, has a shell that is really light but is also really difficult to break. The natural design of this creature is one that uses proteins to create a hard-to-break web which keeps the shell safe from harm. If we can harness that natural power, we can make some really cool things using a similar material.

·        Better colors. Science News for Kids also points out that creators of all types of things are turning to animals to get a better understanding of how to use improved colors in their creations. Specifically, they are looking at the way that the feathers of certain birds and butterflies are shaped and structured. They have learned that the way scales reflect light on these creatures is what makes their colors stand out so beautifully and they are learning to replicate that in the lab in order to create cooler colors on the eye-catching things that humans own.

·        Water-harvesting tools. We are rapidly using up our water supplies which is causing a lot of concern for people living in deserts. Those people may be happy to know that it could be possible to take water out of the fog in the air and turn it into something usable in areas where water is scarce. That’s not something that the researchers working on such an invention would have realized if they hadn’t had the chance to study the beetles that do exactly that same thing in the deserts where they live. Re-creation of the natural design of those beetles could lead to some serious water-harvesting inventions in the near future.

·        Self-cooling buildings. Another thing that we’re concerned about wasting these days is energy. Well, we may not have to if we can create buildings that require less energy. One such building is a self-cooling building based on the design of the mounds created by termites. We may not know how to keep cool without wasting energy but those little buggers sure do.

·        Amazing types of tape. Researchers are studying geckos to see what it is that they naturally have sticking to the surface of their feet that allows them to climb upside down on ceilings without falling off. Studying these geckos has allowed these researchers to start creating a unique kind of tape that has the potential to allow people and machines to do all kinds of neat things. They haven’t quite gotten this invention down pat yet but they’re definitely working on which could one day mean that we could walk on ceilings just like geckos do! Similar sticky glues have also been inspired by mussels.

·        Bionic cars. A concept car created by Mercedes-Benz back in 2007 was based on the study of several things in nature including the boxfish. This is a really streamlined fish that car design researchers realized could be mimicked in order to create a great aerodynamic vehicle. The shape of the car is strikingly similar to that of the fish, a shape that you wouldn’t necessarily think of as being right for a car unless you were someone who truly thought “outside the box”.

·        Athletic clothing. One of the main areas of invention that frequently turns towards the animal world is the area of athletics. That’s because there are many animals out there that are faster and stronger than humans. The athlete’s goal is to become superhuman which sometimes means turning towards the inspiration of animals. For example, Speedo created a swimsuit design based on shark’s skin to allow for increased speed of Olympic swimmers in the water.

·        And lots more. Check out the many innovations reported on by biomimicry groups which are groups committed to learning from all kinds of nature including animals.

Perhaps we should stop looking towards man-made achievements for inspiration and start turning our eyes towards the animal world!