Is It Right to Blame Parents for Actions of Their Adult Children With Mental Illness?

Over 30 years in human services working for and with people with developmental disabilities.

There was a shooting in our town. Three people are dead, including the killer who died by suicide. The broadcast news and social media were full of information about the two women victims. They were generous and high-achieving women. A loss for our community. Most of the social media has been full of warm thoughts and prayers for the families.

But there was one post that blamed the killer's parents for not doing enough. Assuring readers, until parents of the mentally ill take action, there would be more mass killings. That post bothered me.

The facts are individuals with serious mental illness are 12 times more likely to be a victim of a crime including financial and sexual exploitation. They are also at a higher risk for suicide, self-neglect and premature death from medical conditions.

Furthermore as Andrew Solomon says in the introduction to Sue Klebold's book, A Mother's Reckoning: Living in the Aftermath of Tragedy, " Most parents think they know their children better than they do;children who don't want to be known can keep their inner lives very private."

What is Mental Illness?

Mental illness, like so many physical illnesses, vary in the degree of severity from mild to moderate to severe. In 2016, there were an estimated 10.4 million adults age 18 or older in the United States with serious mental illness. A severe mental illness is described as a mental, behavioral or emotional disorder resulting in serious functional impairment -substantially interferes with one or more major life activities. Major life activities include self-care, self-direction, learning, mobility, receptive or expressive language, or capacity for independent living.

HIstory of Service in Community for Those with Serious Mental Illness

In my lifetime, there has been a paradigm shift from warehousing persons with mental illness in large state-run institutions to placement in the community. Advancements in medication and litigation ended the segregation into large institutions and began the funding of services in the community. However, the communities were not prepared and in the 1950s, federal funds were allocated to the development of community mental health centers. Then, in the 70s there was another shift in funds toward the development of community services for those with serious mental illness. There continue to be efforts to enhance services in the community. Yet, today, many states still face major challenges in marshaling the resources for community-based services for the working-age adult with serious mental illness.

The most important safety net for those with mental illness and other disabilities is relationships with others. Thus, the valuable role provided by more than 8 million caregivers in the community. They care for adults with mental illness despite the difficulties finding community providers and navigating a limited and unequal health care system. A 2017 National Alliance for Mental Ill (NAMI) report, it was revealed that patients with mental illness have difficulties finding a mental health therapist who would accept their insurance. The Milliman report released the same date, noted that psychiatrists are routinely paid less than primary doctors and medical specialists for same types of services--even those services under the same billing code. There is also the 1996 Health Insurance Portability and Accountability Act (HIPPA) which protects adults' medical records and other health information. Thus, if services can be found, caregivers may not be allowed access to information unless the adult with mental illness gives consent or the family member has guardianship rights.

Futhermore, it is difficult to be part of the treatment when you are blamed for the behaviors of your child or for the mental illness itself. Yet, historically parents have been blamed for the behaviors of their childten with mental illness, even for the illness. Mothers have been labeled schizophrenogenic, refrigerator mothers, and more. That is not to say that parent-child relationships are not important, they are critical. But, it is known that environmental and genetic factors are at play here as well. Environmental factors can run the gamut of:

falling victim to a crime, or

All these negative environmental factors can produce stress which if there is a genetic component increases the risk of mental illness.

On the flip side, early identification and early effective treatment can help individuals learn how to identify and manage stress triggers that heighten their mental instability. The key is the early intervention which is difficult unless you know the early signs of mental illness.

According to the NAMI website, each illness has its own symptoms, but some commons signs of mental illness include:

changes in sleep habits or feeling tired and low energy

abuse of alcohol or drugs

multiple physical ailments without obvious cause

inability to carry out daily activities or handle problems and stress

Simon Davis points out in his article in a BC's Mental Health and Substance Use Journal that "feeling of guilt about whether or not mental illness is someone's "fault" are very common. They are also deeply uncomfortable. In fact, they are so uncomfortable that people often find it hard to talk about them. These are feeling that cause families much suffering. People need to be aware of this vulnerability and the damaging effect of judgemental comments."

It is more than guilt the families may feel. Sue Klebold writes about her son who died in the murder-suicide at Columbine High School in her book, "For me, the incomprehensibility of the way Dylan died magnified these feelings of instability at the foundation of my identity by throwing everything I believed to be true about the life I'd lived, about my family, and about myself into question." Seventeen years after the Columbine High School attack, Kelbold state in her book, "A day does not pass that I do not feel a sense of overwhelming guilt - both for the myriad ways I failed Dylan and for the destruction he left in his wake."

A Mother's Reckoning: Living in the Aftermath of Tragedy 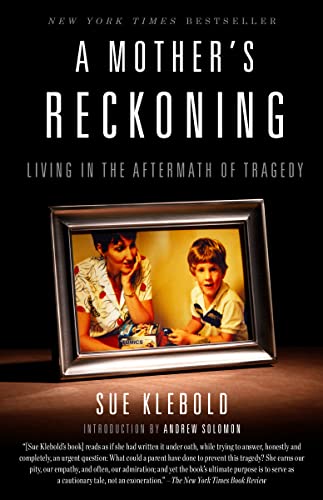 A Mother's Reckoning: Living in the Aftermath of Tragedy
A telling and insightful book from the mother of Dylan, one of the murder-suicide victims of Columbine High School. Raw and educational, it will leave you wanting to hug your children one more time and tell them you love them and tear their room apart at the same time.
Buy Now

With so many factors that may be stressors--some beyond parents' control and some not; with so many warning signs misread or missed by parents and those in the community; with so many families struggling to work through the system and get help for their loved ones with mental illness placing the blame solely on the parent is the least helpful thing we can do.

Klebold, Sue. A Mother's Reckoning: Living in the Aftermath of Tragedy. Broadway Books.2017.