The Kylemore Abbey is a storybook place with an storybook connection to Camelot.

This is a story that connects the Kennedy family, their Irish heritage, the beautiful countryside of Ireland, the architecture of Ireland with a beautiful custom piece of jewelry designed specifically to recall the legendary architectural details in the church at the Kylemore Castle, now called the Kylemore Abbey. Discover Ireland gives us a wonderful synopsis of the history and the architectural value of Kylemore Abbey:

"Kylemore Abbey, built in 1868, is one of the great baronial style castles remaining in Ireland and its six acre Victorian walled garden....Two of the 21 original glasshouses have been restored. The restored head gardener's house and workmens both are also open to visitors. The garden visit is a must for both garden enthusiasts and non gardeners alike."

The scenery and architecture of the Kylemore Abbey is pristine story book. You can readily imagine Camolet and the knights in shining armor and King Arthur's round table. A more romantic and charming venue could not be found the world over.

The estate was original built in 1867 by Mitchell Henry and comprised 13,000 acres. The Kylemore Castle originally included a Neo-Gothic style Church, extensive gardens and two glass buildings for greenery among 20 other building for gardening.

Jackie Kennedy had traveled the world, studied in France for one year, and could speak 6 languages. A very accomplished young women who married a man who would become the President of the United States. A man who believed in democracy and equal rights. A man greatly loved and admired by many but a man who was killed by an assassin's bullets on November 22nd, 1963.

For an accomplished traveler from a well to do family to admire one place in the world is an important statement. Ireland is esteemed among travelers but this great compliment to this tiny nation needs to take notice.

For any place in the world for Jackie Kennedy to find memorable is a tremendous compliment.

And Kylemore in the county of Connemara in Ireland is a very deserving location. The photos speak for themselves - the photos of Kylemore Abbey are simply mesmerizing from the lush green vistas to the intricate architectural details of the castle and of the church.

Even as a seasoned traveler, I can imagine Jackie being touched by this story book place. A place where time stood still, where every view was majestic. A place of great pride for all of Ireland.

I believe Jackie wanted to forever retain the memory of Kylemore Abbey. And it was for that reason, she took the time to sketch the architectural details of the interior of the church.

It was the beauty of the details within the church chapel that Jackie wanted to retain and take with her - and that she did - she literally sketched the architectural details and brought those drawings back to the United States with her. 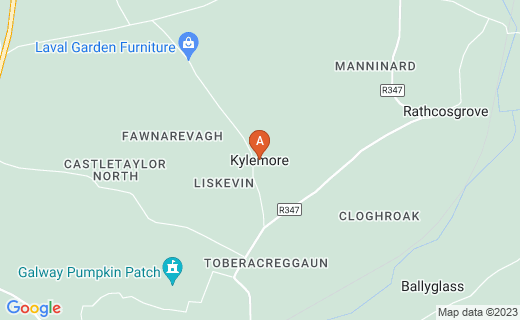 The Kylemore Abbey Cross is a replica provided by Jackie's Jewelry.  Jackie's Jewelry replicates many of Jackie Bouvier Kennedy's pieces of jewelry and is manufactured by Camrose and Kross to precise specifications to include even the weight in faux materials along with color and dimensions.

The Kylemore Castle - Fun Story From Long Ago

There is a fascinating backstory about the owners of the original Kylemore Castle. The son of the original owner/builder (Mitchell Henry) was an inventor. In a detailed account of their family history, the great grandson of Mitchell Henry talks about his father the inventor. Interestingly, his father traveled to the United States happened to meet a fellow inventor who was seeking start-up money for a young mechanic. The young mechanic happened to be Henry Ford!

As another traveler so aptly stated Kylemore Abbey is a "slice of heaven." "North and west of Galway city, in Ireland...I have been to many beautiful places in my life, but this must certainly be a little slice of heaven. It was wonderful in late September --- I can only image what it must look like in late May when the thousands of Rhododendrons are blooming."

In Stephen Spignesi's book J.F.K.Jr. the author details that the program for the dedication of the Runnymede Memorial in Great Britain (Lot Number 50 at the Sotherby's auction that was attended by the entire First Family and which also included a photo of John and Caroline walking with their mother Jackie Kennedy at Runnymede), sold for $34,500!

The Back Story of the Commission of the Kylemore Abbey Cross

Philip Katz of Camrose and Kross who initiated and creates Jackie's Jewelry - exquisite faux exact replicas of Jackie Bouvier Kennedy's jewelry shared with us when he visited QVC that when Jackie Kennedy visited the Kylemore Abbey, she was so taken aback by the beauty that she actually sketched the design of one of the architectural elements, returned to the United States and commissioned a custom cross to be created using the Kylemore Abbey architecture for inspiration.

It is important to note, that Jackie Kennedy was handed countless gifts - gifts of state, romantic gifts for birthday and anniversary celebrations, gifts from her family not to mention the several pieces of heirloom jewelry handed down through the Bouvier family. And yet, Jackie was inspired to sketch the intricate details that mimic the arches withing the church to create a custom piece of jewelry.

This custom piece of jewelry is a piece of artwork with its intricate, openwork with bright blue simulated sapphires, clear crystals, and simulated pearls. A simulated pearl also glistens on the bail. From the Jacqueline Kennedy Collection. The cross is limited and can only be purchased through QVC. Philip Katz went on to say that the Kennedy family has decided not to release more crosses.

Jackie's crosses were very personal and precious to her. This one is of a special place and was customized to her specifications. Additionally, if you listen to the history of John F. Kennedy and Jackie, both of them had a special love for the Irish and celebrated their Irish heritage often with emeralds. Her anniversary band was custom designed by JFK himself and included emeralds. Many of Jackie's custom pieces of jewelry related back to a special affinity for the love of Ireland.

Ireland and the Kennedy's Affinity to Ireland

Ireland was always a special place for Jackie and John F. Kennedy. Many of Jackie's most prized pieces of jewelry reflected the affinity and love they felt for Ireland and their Irish heritage.

John F. Kennedy's genealogy is Irish through the family name of Fitzgerald.

Jackie's anniversary ring from JFK was made of emeralds again reminescent of Ireland. And among the hundreds of pieces of jewelry, one of the few pieces Jackie herself had specially crafted was the Kylemore Abbey cross.

Philip Katz, founder of Jackier's Jewelry shared with us "...no photo of Jackie wearing this specific cross has been released to us by the family." "Jackie had made drawings in a few locations and had jewelry made to match those drawings. She is not the first member of her family to do so, her Grandmother had done the same (also with a cross and necklace) taken from a painting of a woman (unknown to us) in a European museum (also unknown to us) and had jewelry created. Jackie's sister Lee has also done the same."

"Jackie had a belt made (when she was only 23 years old, in a jewelry style using her initials (long before it became popular)."

A Special Piece of Jewelry - Symbolic of a Story Book Place

Jackie had inherited several important gifts of jewelry, the collection of Jackie's Jewelry mainly revolves around the sentimental gifts from her husband John F. Kennedy. Jackie was also the recipient of several gifts of important jewelry by heads of state throughout the world. It is important to note, that on this particular piece of jewelry, Jackie actually sketched the design and had it commissioned back in New York. It is a piece creation of Jackie's for a special place in the world.

Kylemore in Connemara Ireland is an important place in history and an important contribution to the beautiful world that we live in. The Kylemore Abbey Cross is a special piece of jewelry symbolic for a very special and perhaps sacred place for Jacqueline Bouvier Kennedy.

The replica jewelry that bears these same initials of JBK and the stories behind the pieces are equally as legendary as this great lady.

Have you visited Ireland?