From King of Spain to South Jersey Squire

In case you were thinking that Joe Bonaparte was a guy who hangs out with Tony Soprano or on a certain Reality TV show, let me assure you that Joseph Bonaparte, though he may have had some shady business dealings,was no mob guy and certainly would not be at home on the set of Jersey Shore. Joseph Bonaparte, KIng of Naples, King of Spain, was the older brother of Napoleon Bonaparte, aka Napoleon I, Emperor of France from 1805 to 1815.

Defeated at the Battle of Waterloo in 1815, and forced to abdicate, Napoleon Bonaparte, emperor of France, was stripped of his power and exiled. After one unsuccessful comeback attempt, he spent the last six years of his life as a British prisoner, on the island of St Helena. When the going got tough for Napoleon, his big brother, Joseph, was forced to abdicate as King of Spain and hotfoot it out of the country fast. In 1813 he left Spain for France and later, Switzerland, taking the Spanish crown jewels and a sizable fortune in gold with him. In 1816, when he was exiled from France, it is said he buried the bulk of his horde of gold and jewels in Switzerland, where it was later retrieved by a trusted secretary, and hopped a ship to the New World.

I have not got a clue why he chose to come to America, I was surprised when doing research for this hub to find that Joseph Bonaparte, like the Marquis de Lafayette, George Washington, Benjamin Franklin, Thomas Jefferson and various other founding fathers of the United States, was a Mason.Perhaps Masonic brothers helped him decide and get settled. Or, perhaps he had other connections in America.

What is clear is that Joseph Bonaparte traveled under an assumed name, landed in New York and proceeded immediately to Philadelphia where Henry Clay offered him his hotel suite.

Styling himself the " Count de Surviliers " Bonaparte lived in several rented houses in Philadelphia while he amassed over 1800 acres of land in the nearby countryside. He ended up with a huge tract on the banks of the Delaware River near Bordentown, New Jersey.

While brother, Napoleon, languished in exile, Joseph was busy building a vast country estate on his newly acquired New Jersey land holdings. He erected a large, imposing mansion, which he dubbed " Point Breeze" on a bluff overlooking the river. By all accounts he was a gentle soul, who truly loved the land and the life of a country gentleman, preferring it to the intrigue and politics that surrounded the crowned heads of Europe. He loved Point Breeze and his American life. At Point Breeze in Bordentown, he created carriage drives, planted trees, gardens, and even created an artificial lake with several landscaped small islands. His library contained more volumes than the Library of Congress. His art collection was of a quality unknown in Philadelphia and his lifestyle was definitely fit for a king-- or at least a duke or an earl.

It is said that Joseph Bonaparte took a certain delight is shocking the sensibilities of the local Quaker ladies by showing them some of the racier paintings and nude statues that he was acquiring as part of his expanding art collection. By all accounts, Joseph was living large on the gold and jewels he smuggled out of Europe. His country estate was quite the oasis of sophistication in rustic America. It took three years to complete, and contained, in addition to the art gallery filled with works by the likes of Murillo, Rubens, Canaletto, Velasquez, Snyders, Rembrandt, da Vinci, Gerard and Vernet, a state dining room and an impressive grand staircase.

Though his wife remained behind in Europe, two of his daughters, Zénaïde Laetitia Julie Bonaparte (1801–1854) and Charlotte Napoléone Bonaparte (1802–1839). lived on the estate for several years. Joseph also had an American mistress, Annette Savage, who bore him two daughters. The older girl died young, but the younger, Catherine Charlotte (b. 1822, d. 1890) married Col. Zebulon Howell Benton of Jefferson County, New York and lived to a ripe old age. 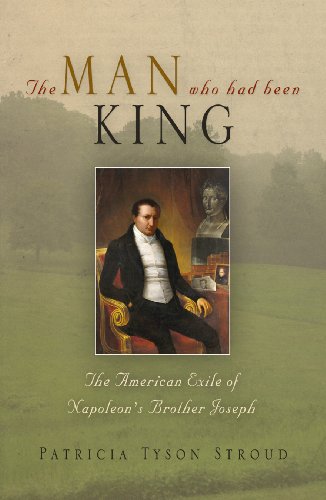 The Man Who Had Been King: The American Exile of Napoleon's Brother Joseph
Buy Now

Joseph Bonaparte built a happy and prosperous life for himself in his beautiful house by the Delaware River. For seventeen years he enjoyed his gardens and the quiet life of a country gentleman. But in 1832, after his brother's death, duty called and he left it all to move to London, in order to be closer to France. The death of his both his brother, Napoleon, and Napoleon's son,made Joseph the Bonaparte pretender to the throne, and Joseph wanted to be close by just in case the monarchy should be restored. He was forbidden by French law to enter the country, but London was much closer than America.

In 1839, Joseph Bonaparte rejoined his wife and family in Florence, after an absence of more than a quarter of a century. One wonders how they all got along after such a long separation. In any case, Joseph Bonaparte died in Florence, in the arms of his wife in 1844 at the age of 76. He has a very grand tomb and monument in Paris among France's heroes at the Hôtel des Invalides' Église du Dôme

The family's American idyll ended when Joseph's grandson, also named Joseph, disposed of Point Breeze and its contents in 1847. The furnishings and art collection were sold at auction. A pier table from the house was eventually purchased during the Kennedy Administration for the White House and is there to this day. You can get a glimpse of it in the video below.

The art collection, when it went under the hammer, was one of the finest in America. There are still families in Bordentown who have Bonaparte stories to tell and pieces of furniture or bric a brac handed down as family treasures given to them by Joseph Bonaparte or purchased from the estate auction held years later.

In an ironic turn of events, Henry Beckett, the British consul in Philadelphia, purchased Point Breeze in 1850. He demolished the house Bonaparte had built, replacing it with an Italianate villa with such amenities as gas lighting and hot and cold running water. That mansion burned to the ground in 1983 and with it went the last vestige of Joseph Bonaparte's vision for the property. The land is currently owned by Divine Word Missionaries, a Catholic monastic order, whose seminary now sits on the property

I think many, both in the United States and Europe, would be surprised to know that Joseph Bonaparte, former KIng of Naples and former King of Spain, happily lived his own American dream for seventeen years on the banks of the Delaware River, near the town of Bordentown, in the State New Jersey, in the United States of America.