Brush up your Latin with me!

I love Latin, but it's been ten (gasp!) years since I taught or studied it. I've decided to review my old textbooks and knock the rust off my Latin skills.

So I'm creating these pages for myself and fellow Latin students wanting to review. I'll include self-made quizzes plus links to other helpful pages and quizzes on the same topic.

On this page, I'll cover first declension (Latin nouns ending in -a), the basic idea of declensions, and how to use the six Latin cases.

Case: Special form of a word which tells us how it's being used in a sentence. For instance, "he, his, him" are three different cases of the English word "he."

Most Latin words consist of two parts: the stem, which tells you the basic meaning, and the ending, which gives additional information such as singular or plural, past or present tense, or how the word works in a sentence.

English changes word endings, too. For example, when one dog meets another dog, that makes two dogs. The -s ending shows dogs is plural. We also change verb endings to show tense: I mop the floor (present tense, meaning something happening now), or I mopped the floor (past tense, something that happened a while ago).

Latin uses endings like these for more different reasons than English.

For example, while English tells you who's doing what to whom with word order (the cat bit the dog vs. the dog bit the cat), Latin uses endings to indicate the subject (the doer) and the object (the victim). In Latin, canem felis mordet and felis canem mordet both mean the cat bites the dog. It doesn't matter which word comes first: the ending on felis shows it's the subject, while canem has an ending showing it's the direct object.

The bad news is that we have to memorize all these endings, the same way you once memorized "I go, I was going, I went, I have gone" or "goose, geese." The good news is that big batches of Latin words all use the same set of endings, so we only have to memorize a few sets. With nouns, these sets of endings are called declensions. All first declension Latin nouns use the same set of case endings.

But first, so we're not just memorizing a random chart of endings with no idea how they apply to the real world, let's talk about the six Latin cases. What are they used for? Here's the basics:

The first and easiest set of Latin endings go with a batch of words that end in -a in the nominative case. These words have lots of -a endings.

You may recognize a few of these First Declension Latin nouns:

If I drink the water, then aqua must be changed to the accusative, aquam, to show it's a direct object, the thing being drunk.

If all the doors in a room are open, then they're portae, nominative plural, showing that they are the subject of the sentence and that there's more than one of them.

If I write something in my notebook, I'll write it in tabulā meā, with a long -ā to show that it's ablative. (Actually, Romans almost never wrote out the long marks. I don't know whether your teacher made you learn them or not. Mine did.)

I remember vividly my fear and confusion when my teacher first put the following chart on the board and told us to memorize it. What on earth? But eventually, it really did make sense. I just had to trust my teacher enough to do the boring work of memorizing.

*In most declensions, the vocative form is identical to the nominative.

First, memorize the six case names separately, since you'll need them for other declensions: Nominative, Genitive, Dative, Accusative, Ablative, Vocative. (No Good Dogs Are Always Vocal.) When we're analyzing Latin words, we tend to abbreviate them: Nom, Gen, Dat, Acc and so on. But it's best to learn their full names.

Wait, how do you pronounce these endings?

How to Decline a Latin Noun

How do you add these endings to Latin words? Latin dictionaries list the nominative singular form, then the genitive singular, because in some declensions, the stem of the word changes (corpus means "body," but corporis means "of the body," for example.)

So, to decline a Latin noun — giving all its singular and plural forms — you need to drop thegenitive singular ending off to find the stem. For example:

The dictionary says: puella, puellae, "girl." The genitive singular ending is -ae, so drop -ae frompuellae to get puell-.

Then, add all the case endings you memorized:

Try declining the words found earlier in this lesson. I only listed the nominative singular for some of them, but luckily, first declension nouns use the same stem (the part that doesn't change, to which you add the endings) all the way through.

For example, see if you can fill in the blanks:

Stay Tuned for the Next Lesson!

Phew! That's all for now. Check this space; I'll link to the next lesson when I've got it ready. In the meantime, here's some links to other sites where you can practice and study First Declension Latin nouns and the six Latin cases. 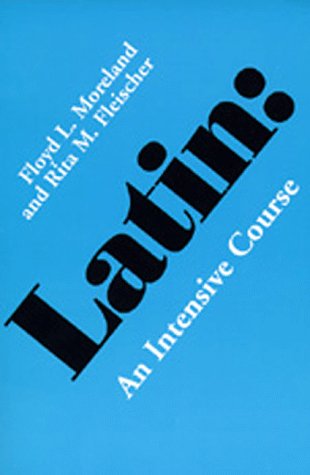 Latin: An Intensive Course
Moreland and Fleischer are a little dense, so this is definitely a college or high school level textbook. I taught college freshmen with this book. The homework exercises are excellent; there's usually four to five sets of sentences to help students practice and reinforce the lessons in each chapter. Like all the textbooks below, each chapter includes a vocabulary list for practice and drills.
Buy Now