Lozen was a woman warrior of the Chiracahua Apache.

The Chiracahua (Tsokanende) had many famous, powerful, cunning war leaders and chiefs - among them was Cochise, Mangas Colorados, Ponce, Victorio (Lozen's brother) and several others.. After Victorio's death, the last leaders of the Central Apache bands were Nana, Geronimo, Mangus (Mangas Colaradas' son) and Naiche (youngest son of Cochise).

History books are full of the legends of fierce male warriors of Native American tribes. Yet little is known about the women warriors who fought and died along side their men. Lozen, an Apache woman warrior, was one of the fiercest and cunning of warriors.

Lozen, a skilled and respected woman warrior and shaman of the Chiricahua Apache, was born around 1840, into the Chihenne band. Chief Victorio, Bidu-ya, (1825 - 1880), was her older brother. She succeeded in battle by using her supernatural powers (Diya) to detect the movements and location of the enemy. Those who remembered said she would stand with her arms outstretched to let the wind caress her skin. The senses she felt raised chills along her arms and she could tell where the enemy was.

In the 1870s, when Victorio's band was living on the San Carlos Reservation in Arizona, where they had been forcibly removed to, he and his warriors left the reservation and evaded the military. They returned to their ways of raiding and marauding and battle with their old, as well as the new enemies. Lozen rode and fought in battle beside her brother to try and regain their home lands, around west New Mexico's Black Mountain, which had been appropriated by the white Americans.

It was said that she could ride, shoot, and fight as well as the men in the band and had great skill in military strategy. Victorio depended upon her and her skills as a fierce, cunning, and intelligent warrior.

Lozen is my right hand -- strong as a man, braver than most, and cunning in strategy. Lozen is a shield to her people.

Lozen, although a woman of the tribe, chose to dress and act like a man and fight with other warriors in Victorio's band. Apache warriors were fierce, feared and ferocious in battle and Lozen was one of the best. She never married. She preferred to ride and fight in battle and dedicated her life to her people by fighting for them.

Sadly,there are very few photos of Lozen. Ones that can be found are too small, dark or grainy and do not show up well in an article like this. Lozen looked very much like Victorio.

Lozen was included in the ceremonies for warriors, sang their battle songs, and prayed with them before the battles. she was also a respected medicine woman and shaman. People sought her out, for, she had knowledge to heal and they depended on Lozen's wisdom.

This remarkable woman would put her own self in harm's way to protect the women and children of her tribe. They looked up to Lozen and trusted their life would be safe under her protection.

Safety for her People Came First

In one battle, Lozen saw first to the women and children who were terrified and confused. She urged them to flee from the American forces by crossing the raging waters of the Rio Grande. Her bravery and courageous command while sitting on her horse, her rifle held high above her, inspired the people to move and flee to safety across the river. Once the women and children were safe, she returned to join the battle with Victorio and the other warriors.

Just before Victorio's last battle, in October of 1880, Lozen had left the band to escort a young mother and her new baby across the Chihuahuan Desert from Mexico to the Mescalero Apache Reservation. She stole horses and provisions to keep them alive and took them to safety. Once at the reservation, she learned that Victorio had fought his last battle and had died at his own hand rather than be captured and enslaved by the Mexicans they had fought against.

The loss of Victorio was devastating for Lozen, but she fought on with fierce energy and pride for her beloved brother. She was no less a warrior and shaman because Victorio was gone - she was ever more empowered with his spirit beside her in battle.

Return to Battle and Taken Prisoner

Lozen returned to her people, the survivors of the battle, in Sierra Madre, where Nana, the aging patriarch of the band was holding them together. She continued to fight in battle with Nana and in later battles fought beside Geronimo, another famous and fierce warrior chief.

After the last campaign of the Apache wars, around 1885, Lozen, along with Geronimo and many other warriors, were taken into custody by the U.S. military and transported to the Mount Vernon Barracks in Alabama. She died there from tuberculosis sometime after 1887.

Even though she preferred to be a warrior and fight with the men of her tribe, she held the respected place of a woman among the Apache. Lozen had her own warrior prayer.

On which we live

This Power is mine

For locating the enemy.

I search for that Enemy

Which only Ussen the Great

Can show to me.

Apache Captives, El Paso Stop Over, 1886. It is Believed Lozen is in the Back row, Fifth From the Right.

Brief History of the Apache

In their days of freedom and power the Apache tribes were known as the fiercest warriors in the southwestern United States.

The Chiracahua Apache were members of several bands that had related cultures and language. Several centuries ago they migrated from western Canada to the Southwest in the United States. They referred to themselves as "the people", in their language this was known as the Dini, Tinneh, or Tiride. The name Apache came from the pueblo tribes of the Zuni - Apachu, which means enemy, is what the Zuni called them.

Long before their conflicts with the European settlers and US government, the Chiracahua fought against the Spanish and Mexicans. For over 100 years they fought to prevent their enemies from taking control of the lands the Apache knew as their home. Then the Europeans came and the Apache people were spread thinner to fight more enemies and encroachments.

The Chiracahua used Apache Pass in the Chiracahua Mountain range to cross over into Mexico on their raids. They often camped up in that area near the Apache Spring, a natural fresh water spring. At times there were over 100 Apaches living in this cooler are where water and game were abundant.

When the Spanish and Mexicans began using the same pass many conflicts erupted and Apache Pass became risky area for the Chiracahua. Eventually the pass was used as a route by wagon trains and the Butterfield Overland Mail stage. The mail company built a station in the area near Apache Spring.

With so many others using the pass, ideas began to arise that the Apache should be forced out of the area. A Lt. George N. Bascom of the US army tried to have one of the Apache leaders arrested at Apache Spring. A battle ensued which left many dead on both sides. This angered Cochise to the point that he would not tolerate any more such incidents. He began warring against the army and all Americans. This finally ended in a treaty with Cochise and his people, but other Apaches were still angry and for many years the Apache Wars (1849 - 1886) were fought.

Cochise fought with guerrilla warfare tactics for twenty years before he made peace with the US and agreed to move his people (including Geronimo) to a reservation in the Chiracahua Mountains. Cochise died there in 1874.

In 1876 the U.S. decided to move the Chiracahua to another reservation in San Carlos, Geronimo escaped to Mexico. He was captured again in 1877 and was on the reservation until September 1881 when he escaped again and returned to Mexico.

In April 1886, a new commander, Brigadier General Nelson Miles was assigned to capture Geronimo. It took Miles six months after he had coordinated 5,000 soldiers at crucial geographic points using mirror flashes, 500 Apache scouts, 100 Navajo scouts, and thousands of civilian militia to track down Geronimo and his band of 24 people. Lozen was with Geronimo at the time. In September of 1886 they caught up with Geronimo and the Apache scouts convinced the chief to surrender to Miles.

Geronimo was the last of the notable Chiracahua chiefs to surrender to the U.S. army. He died from pneumonia on February 17, 1909 at Fort Sill, Oklahoma.

— Geronimo, his last words on his deathbed.

Geronimo in March 1886 Just Before he Surrendered to General Miles

A friend of mine, who lives in Arizona and is an expert on the Chiracahua people's history, once told me a story of Geronimo and his last band of warriors. I find the story rather amusing and throws some light on the humor of people even when in dire situations is:

During his time of cunning evasion Geronimo and his people did some pretty creative things to avoid being located. One of their ways was to cut telegraph wires and redirect them through trees and in circles so they would be difficult to track by those in charge of checking the lines. The copper wire pieces they cut off were given to the women of the band to make rings and jewelry with.

Chiracahua National Monument is Worth a Visit to see the Hundreds of Natural Rock Formations and Hoodoos. 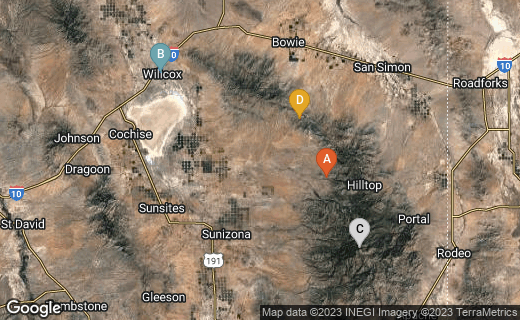 The monument is about 36 miles (58 km) southeast of Willcox, Arizona.

Willcox is in the Sulphur Springs Valley.

The Apache Pass Station that Butterfield Overland Mail built in 1858.