An Introduction to Magnetic Therapy

Despite its muted reputation as quackery, magnetic therapy has continued to convert non-believers into magnetic testimonials.

Sports enthusiasts, the elderly, and sufferers of low back pain say that while magnetic disk therapy is not a cure all, it helps alleviate pain, discomfort, sore joints, grinding spinal disk pain and other ailments associated with aging and intense levels of physical activity, like professional athletes and trainers.

Since magnetic fields attract and repel, the principle of blood flow repulsion is at work, here. The blood protein hemoglobin is mildly dia-magnetic. Long term exposure to the magnets is exercised with the goal of pushing the concentration of blood from the pain point allowing freedom of movement, lessening of pain and relief of pressure due to applying the magnets to pain points in the body.

The Gauss rating is a physical measurement measuring the surface of an area, like the skin, or the earth's surface as opposed to the muscle mass below the skin or the earth's layers. In choosing a suitable magnet, the internal Gauss rating is usually stated but the surface Gauss rating will be much less. The principal of penetration is at work here - can the magnet effectively reach the bio-chemical-electro level to the blood stream and muscle mass? The magnet must be strong enough to make a difference in recharging the body to a higher circuitry level. So the theory says.

Does it Really Work?

Those who say that Magnetic Therapy is a hoax claim that the magnetic fields present in the disks are too weak to affect any long term (or intermediary) effect. A placebo effect, they say, is the reason for the improved health.

Every year, Americans alone invested $33.9 billion dollars (annually!) on alternative medical products. Included in that total is an estimated $500 million spent just on magnetic therapy by Americans. Worldwide, the number is estimated at $5 billion for international consumption of pain-relieving magnets.

What Magnets Do and Cannot Do

Magnetic therapy was shown to relieve pain in control groups, where both magnetized disks and a placebo "dummy object" were used so wearers wouldn't know the difference.

Those who had the "real magnets" stated a nearly 70% improvement in knee joint pain, pain in the pelvis, and those suffering from fibromyalgia.

Fibromyalgia is a condition which causes fatigue and difficulty sleeping. With symptoms similiar to chronic fatigue syndrome (CFS), it was shown to respond well to magnetic therapy.

Unfortunately, suffers of Low Back Pain, as well as Carpel Tunnel Syndrome (wrist and forearm pain) do not show a marked effect from the magnetic therapy disk treatment.

A study of women, who suffered with the embarrassing condition of urinal incontinence improved after being given bi-weekly magnetic stimulation to the pelvic floor area. An impressive 58% claim that the magnetic therapy helped them.

Another control group was given magnetic belts to place around hips 24 hours a day. In a period of only four weeks, a large percentage of the wearers reported a significant reduction of pain in the pelvic area.

Do magnets help cure cancer? At this point and time, despite claims to the contrary, it appears that the answer to this sticky question remains a resounding "NO".

Bracelets, rings, wrist and ankle straps are intended to alleviate arthritic pain in the joints.

Mattresses, blankets, pillows which are intended to improve blood circulation, revive the muscles and reduce pain and discomfort while the patient sleeps. The pillow is usually shallow and is designed to alleviate neck pain (from too many hours sitting at the computer, for example).

Creams and Supplements can be applied internally or externally.

What is your opinion on Magetic Therapy? 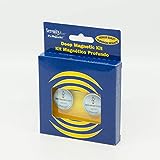