A Totem Pole Is a Person in Native North American Culture

You treat a totem pole with respect, just like a person, because in our culture, that's what it is. A pole is just another person that is born into the family, except he is the storyteller. So it should be treated with respect and honour.

Totem Poles Around the World

Each Pacific Northwest totem pole, a carved cedar pole of power animals and other Native North American characters, is a person who is a storyteller.

The Algonquians of Western Ohio have designated human storytellers who wear a special makeup to mark them as such, but the Pacific Coastal Nations of Canada, America, and the islands in between have their carved cedar poles.

The person that is the totem pole is a storyteller who narrates the founding histories and legends of the Native American Nations and First Nations represented on the pole. The person also tells stories about the owner of the pole and the owner's family and exploits. In order to hear these words, we must learn who each character on the pole is and what is his or her individual backstory.

Totem poles are found across the Pacific Ocean in several countries as well as in the Pacific Northwest, but they have different roles in society.

Cartoons filmed in the 1930s - 1970s incorrectly taught American children that beside every tipi in the Western US stood a totem pole, a campfire, and a Native American wearing a stylized chief's war bonnet of a thousand feathers. This notion was inadvertently reinforced by amusement park and campground owners that purchased totem poles for their businesses.

This occurred as the automobile came into great favor and Americans began taking travel vacations across the major highways and to US National Parks promoted by Teddy Roosevelt, boosted with help from WPA work programs offered by Franklin D. Roosevelt during The Great Depression. An small town of concrete tipis with at least one totem pole became a tourist attraction and motel on Route 66 in the 1930s. The Wigwam Restaurant showed up in several spots across Route 40.

Totem poles began to proliferate in jewelry, paintings, toys, keychains, business logos, and elsewhere. Professionally carved models began to appear in front of large office buildings as art installations. Today, hundreds of professionally created totem poles may be found in the UK. The totem pole became a piece of contemporary art, without the meaning assigned to them in the traditional crafting process. This is a little like the difference between the traditional Christmas and commercial Christmas that stand side by side today.

We know that totem poles originated long ago in the Eastern Hemisphere before any appeared in the New World well before AD1700. What nations lived in the Pacific Northwest at least several hundred years ago and perfected carving in what has become the Master Craft of Totem Poles today?

One legend of the oral tradition is that the first "totem pole" was carved in Queen Charlotte Islands/Haida Gwaii after such a pole washed ashore from somewhere in the South Pacific, such as New Zealand and Polynesia. Nations of the Pacific Northwest discovered it and thought to carve their own. This seems to have occurred also in the Dall and Prince of Wales Islands of southeastern Alaska, forming a type of geographical rim of people who began to carve poles.

A Rim of Major Pole Carvings 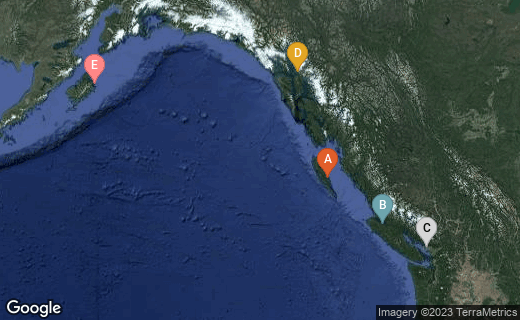 Suspected origin of Pacific Northwest carved poles, based on the oral tradition that a pole from the South Pacific washed on shore and gave the idea.

B
Alert Bay BC:
Alert Bay, BC, Canada

C
Vancouver BC:
Vancouver, BC, Canada

Haida First Nation may be the second largest and most active group of pole carvers historically. The Tsimshian seem to have them beat in that activity, but are less well known. The Kwakiutl are equal to the Haida in cedar pole production and are the people who worked with the founders of the science of anthropology, thereby bringing the knowledge of their carving to the world.

The book titled Out of the Silence highlights these and several other North American Nations equally.

The earliest name heard or seen among the Haida pole carvers as of this writing is that of Sqiltcange (Reference: Professor/Curator Robin K. Wright, Northern Haida Master Carvers ; 2003).

Master carver Albert E. Edenshaw was thought to have carved a huge number of poles, but Dr. Wright discovered that a portion were created actually by Charles Edenshaw, Albert's nephew. Robert Davidson carried on the family tradition, being Charles' great-grandchild. Professor Wright has studied the work of Freda Diesing and Donald Yeomans as well, 21st century descendants, and other 19th - 20th century carvers.

Note that women did not often carve in the traditional native groups, but have done so more frequently in the 20th - 21st centuries. Ellen Neel, a Kwakiutl, was the most prolific and honored female artist in pole carving, although her life was short in the first half of the 20th Century.

Totem poles existing before the 19th Century are literally gone, if they have not been refurbished by Canadian and Alaskan governments and private art programs that preserve native arts. This sad loss happened, because the usual red and yellow cedar woods decayed after approximately 100 years and crumbled or fell to the ground. No petrified poles have been as yet seen to date.

However, in cultural anthropology and archeology, we know that these "totem" or power animal poles have probably been created for several centuries, given the importance of power animals (including humanoids and human spirits) in native religious traditions and creation stores. The word totem was not originally used by the tribal nations that created the carved cedar poles. That word comes from some eastern tribes, commercial sales companies, and New Agers.

As for humans, the Wild Woman and the Wild Man on many poles are figures in actual history that may have been identified as Bigfoot by natives and whites. The Squamish Nation in the Pacific Northwest still observes a tradition in which young men go out into the wilds to live only in nature for 10 years, covering themselves in moss for warmth as their hair also grows long. These Squamish men may also be identified as Bigfoot from time to time and the study of this phenomenon is ongoing.

Totem poles are people. They are storytellers of families entrenched in the oral tradition of history. Few poles were accompanied by the written version of the stories, because of the strict oral tradition and the belief that families would proceed down the generations and remember these stories forever, but some written stories have been found. Modern Era 21st-century poles sometimes include an accompanying planning diagram and written history .

Gyáa'aang in Haida is recognized as the word for the family history pole and transliterates poetically as "man stands up straight." Apparently, Pacific Northwest Indigenous groups do not use a word totem at all in their languages for the power animals depicted on poles and in ethnic legends.

The following groups of native peoples have carved and continue to carve poles, but there are other groups that likely have also been involved. Pole carving has extended southward into Oregon. However, the American West and Southwest is home to non-native carvers that may or may not hold with traditions of the original carvers. At least one major carver is in Jerusalem.

A Selection of Master Carvers

Tommy Josephs - Native Tlingit in Alaska. He has carved most of his life and recently completed a memorial pole to all past, present, and future victims of domestic violence. It stands in Sitka, Alaska, at the Family Justice Center as a community pole. Josephs still makes some of the animals on his poles look half-human, because tribal creation legends tell of creatures able to travel back and forth to shift shapes between the animal and human worlds (similar to Dreamtime).

John Joseph - Squamish of Vancouver, BC Canada. This carver has also carved most of his life, trained by his father, and has totem poles and carved plaques in BC and the USA among private collectors. Mr. Joseph carves cedar doors with traditional animals, along with cedar glass-topped table stands and cedar chests as well.

Ellen Neel (1916 - 1966) - Kwakwaka'wakw and Celt. Alert Bay, Northern Vancouver Island, BC (see map below). Women did not often become carvers, but during the 20th C, some did so. Ms. Neel was a master carver that was able to earn a meager living for herself, husband, and several children in carving souvenir poles for tourists. Famous carvers Chief Charles James (1867 - 1938) and Mungo Martin(1879 - 1962) were older members of her family (grandfather and uncle, respectively). Carving has been an intergenerational tradition in Ms. Neels family and the nations on Vancourver Island. Descendants in this line of carvers include Aubrey Johnson and Stephen Bruce. During the period of time that potlatches and raising totem poles was illegal in Canada, it was the Kwakwaka'wakw People especially that continued have these events in the more isolated region of northern Vancouver Island (up island).

Norman Tait (1941 - ) - Nisga'a Nation, descendant of early master carver Oyai. He was trained in the oral traditions and tells those stories today. Trained by his father and other masters, Tait has carved poles for museums, cities, and the British Royals. He has trained a new generation in Ms. Lucinda Turner. His work is on exhibit at a number of galleries.

Gabriel Bass - Jewish, raised in the Pacific Northwest. This artist was educated in arts, design and cultures in Jerusalem, Israel, Seattle, Massachusetts, and British Columbia. He is Program Director of the Israeli-First Nation Cultural Exchange.

John Williams (1960 - 2010) - Dididaht Nation, Vancouver Island. Partially deaf and working in Seattle as a well known carver, he was told to put down his carving knife by a police officer investigating a local crime. Not hearing the officer, Williams did not respond, and was killed with four gunshots. Seattle paid his family $1.5 Million in damages and the officer quit the force the day after the shooting in August 2010.

Bill Reid (1920 - 1998) - Kwakiutl, Haida and European, related to Chief Charlie James, Ellen Neel's father. Mr. Reid first studied European art and jewelry making such as goldsmithing, until he visited Haida Gwaii (the Queen Charlotte Islands) in the mid-1950s. He found bracelets there made by his great uncle, Charles Edenshaw (mentioned above), the head of a lineage of master carvers among the Haida.

After his discovery of his artistic heritage among the Haida, Mr. Reid studied Haida arts, including pole carving. He added his European arts skills to this traditional craft for a new generation that he trained, and championed the Haida People against government land claims. When he died, reports are that the Haida transported him to his mother's childhood village for burial in a canoe that he himself had carved from one cedar log. 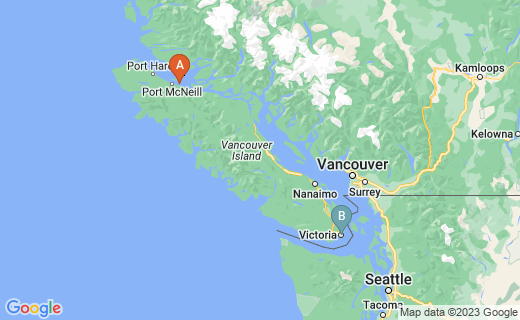 B
Victoria BC (for reference):
Victoria, BC, Canada