If a friend asked you how far it was from their house to yours, what would you tell them? I’m sure most people these days would hop onto Google Maps, input the addresses, and then read the distance from the output panel. But what does this distance really represent and how accurate is it? If the distance between your house and a friend’s is short, then accuracy, as well as the calculation method, may not even be an issue. However, if you are trying to create a marathon route with the exact distance of 26.2 miles, then the accuracy and measurement method can become an issue.

When you want to know the distance between two locations, it's not quite as simple as pulling out a map and laying a ruler on it. In today's technologically advanced world, there are many mathematical methods that can be used by a geographic information system to accurately calculate distances. Listed below are five of the most common methods used today.

The great circle method is probably the most commonly used method for measuring distances on the earth. This method is sometimes call the "as the crow flies method." When measuring distances, the great circle is the intersection of a plane and the earth's shape (a spheroid) whose origin is on the plane of intersection. In other words, if a flat plane is cut through the two points you are trying to measure the distance of and the center of the earth (spheroid) you will create an arc that represents the shortest possible distance between your two locations of interest.

Measuring distances with the great circle method are usually accurate enough for computing travel routes, distances between cities, and even flight paths. However, it must be noted that this form of measurement doesn't take into account the changes in surface topography that would be experienced as you travel along a path. As a side note, this is the method that Google Earth and Google Maps uses to calculate distances.

Geodesic measurement is very similar to the Great Circle method. In this method, the earth is assumed to be a ellipsoid instead of a spheroid. This assumption makes the calculations more accurate for determining large distances. However, the calculations are more complex then the great circle method and require more resources to complete. Improvements in accuracy over other methods are normally only seen on very large distances. Just like the previous methods, this form of distance measurement doesn't take into account the changes in surface topography as you travel from one location to another.

Loxodrome measurement (sometimes called constant azimuth measurement or Rhumb line distance), is the measurement of a line that has a constant bearing or azimuth relative to the true north direction. The calculated path between any two points will cross all meridians of longitude at the same angle. Any calculated path that is not 90 degrees from a meridian would create a spiral shape leading to the north or south pole. Refer to the figure at right for a visual of this.

Because of the way the line is measured, the loxodrome method does not produce the shortest distance between two points. This method of measurement is mostly used for nautical and aeronautical navigation because of the convenience of not having to constantly change bearings. However, with today's technology this method is falling out of use because of the increased accuracy and ease of using other methods such as the great circle and geodesic methods. In terms of aeronautical navigation, switching to the great circle or geodesic method can lead to significant reductions in fuel consumption when planning a route.

With this method of measurement, the topography, as well as the curvature, of the earth is taken into account. This is why it is sometimes called the "as you walk measurement method." Although this method is not useful for aeronautics and air travel, it is the most accurate measurement method possible for surface travel. For long distances, the underlying concept of the great circle or geodesic methods can be combined with surface topography to create a very accurate "as you walk" distance between any two points. In many cases, the surficial measurement method will lead to distances that are actually slightly longer than what is computed with the great circle or geodesic method.

Even though this method is highly accurate, the use of surficial measurement is not very common. This is because determining the distance along the earth's actual physical surface requires an immense amount of data such as digital elevation models and/or topographic maps. The calculations can also require a large amount of computing power to complete and are only as accurate as the input data is. In addition to this, the increase in accuracy over simpler methods is very small and is not usually worth the effort of computing it. For this reason, surficial distances are usually only directly measured in the field with equipment such as a surveyor's wheel rather than calculated from a large scale map. However, if you still need this accurate of a measurement, the "as you walk" distance can be estimated using a good topographic map and some simple trigonometry.

Comparison of the Methods - How Far is it From Los Angeles, California to Queens, New York?

As we have seen, there are 5 main methods used to calculate the distance between any two points on earth. So how do these methods compare with each other when faced with computing the distance between the airports located at Los Angeles, California and Queens, New York? 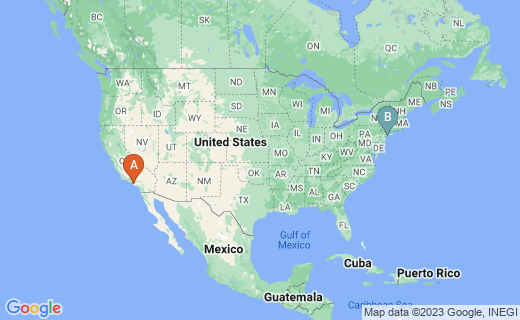